Murdoch University opened its doors in 1974 as only the second university in Western Australia. Named for Sir Walter Murdoch (1874-1970), widely regarded as one of Australia’s finest essayists, writers and educators, Murdoch University quickly became home to some of the state's finest and most free-thinking students and academics.

Born in Scotland in 1874, Murdoch immigrated to Melbourne with his family at the age of ten. After completing his school studies, he was educated at the University of Melbourne, obtaining a Bachelor of Arts degree in 1895 and a Master of Arts degree in logic and philosophy in 1897. 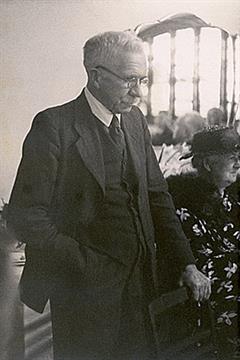 After graduation, Murdoch worked as a teacher until 1904 when he began work as an assistant lecturer in English at the University of Melbourne. He moved to Perth in 1912 and took up a position as founding Professor of English at the newly formed University of Western Australia. During Murdoch’s time at UWA he played a major role in shaping the teaching of literature at the secondary and tertiary level of education. He was also appointed chief examiner of secondary English, a position he held for 25 years. He retired from the position of Chair of English in 1939, at the age of 65.

Sir Walter Murdoch was a prolific writer, and many of his essays and articles were published in local and national newspapers. He had been a journalist for The Argus in Melbourne before relocating to Perth, and in 1945 began to write for The West Australian, producing a weekly ‘Answer the Reader’ column for over 20 years.

Something of a maverick, Murdoch’s democratic views and strong beliefs in equality and inclusivity were unusual for the time, and featured heavily in his many publications and lectures. He recognised the importance of active citizenship, free education and equality, and saw education as a means of social empowerment and as a way to improve all aspects of civilization.

At a time when universities were still largely wrapped up in elitism, Murdoch believed that higher education should be available to everyone and saw public university as an essential part of a well-functioning community.

When he was informed of the decision to name Western Australia’s second university in his honour, Murdoch’s response was “it had better be a good one”.

Although he passed away just weeks after the announcement of Murdoch University, his legacy lives on. Throughout his life, Sir Walter Murdoch strove for inclusive tertiary education and to resist all elitist ways of thinking. It was on these principles that Murdoch University was founded and more than 40 years later we are still committed to upholding the values he held so dear – accessible education, free thinking and inclusiveness.

Explore the facilities and courses that make Murdoch a leader in education.

With your support, our students and researchers can change the world.

Explore the facilities and courses that make Murdoch a leader in education.

With your support, our students and researchers can change the world.

See our journey from a free-thinking university to a global centre for learning, teaching, research and industry.

Our organisation comprises people who are committed to Murdoch University’s success.

At Murdoch, we’re always striving to shape the world through our leading education and research.