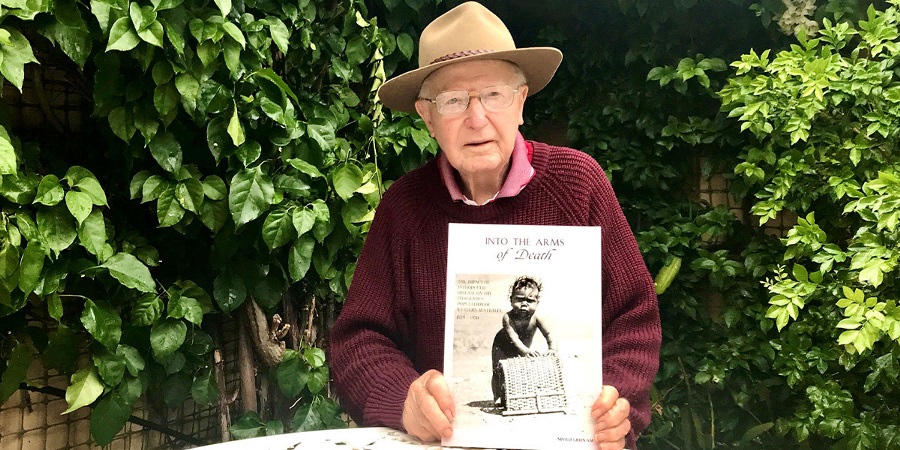 The shelves at the Murdoch University Geoffrey Bolton library are always refreshed with the newest, most interesting releases for our students, alumni, and staff.

A recent publication added to the collection was written by Murdoch University alumnus, Dr Neville Green AM, and is the 13th publication from his expansive research into Australian Indigenous history.

“Into the Arms of Death: The Impact of Introduced Diseases on the Indigenous Population of Western Australia 1829 – 1970” reveals the fatal consequences that diseases of the British Settlement had on Indigenous tribes in WA, and the widespread desolation that came from tribe to tribe transfer. The book came about after many years of research, pulling together references from all over the State, and piecing the jigsaw together to uncover the truth.

Dr Green’s inspiration for this research came from his passion for taking the road less travelled.

After spending six years in the Royal Australian Air Force in the early 1950s, he married, had his first of ultimately four daughters, and decided to become a teacher. Finishing school at 14 meant he had one chance to pass year 12 and begin his journey at Claremont Teachers College.

His final year essay called ‘People of Perth: 1830 – 1840’ won him the Sir Ernest Lee-Steere Open Prize and was the genesis of a road to study and document Australian Indigenous history for many years to come.

“It was a topic that hadn’t been talked about much before. I wanted to find out more about the relationship between the Settlers and the Indigenous people of WA. It sparked an interest and I knew it was a never-ending road of discovery,” said Neville.

His first book, ‘Desert School,’ was published in 1983 and received widespread praise including comment from Federal Minister Kim E. Beazley who noted he was ‘moved and gripped by the incredible story.’

Dr Green has two PhDs, receiving his second from Murdoch University in 2005. He is a Member of the Order of Australia, recognised for ‘service to the community as a historian specialising in Native title and Indigenous projects, as an author, and to professional associations.’

Since his debut work, he has published 12 more books, sharing the stories of Aboriginal Elders to be passed on for generations to come, exposing the impacts of early settlers and developing reference lists to help identify different communities mentioned throughout history.

Dr Green, approaching 88 years of age, has three more books on the way. When asked why he keeps going he concluded simply with “the end of this road is nowhere in sight.”

If you’re interested in checking out Into the Arms of Death,” sign up for an alumni library card here.