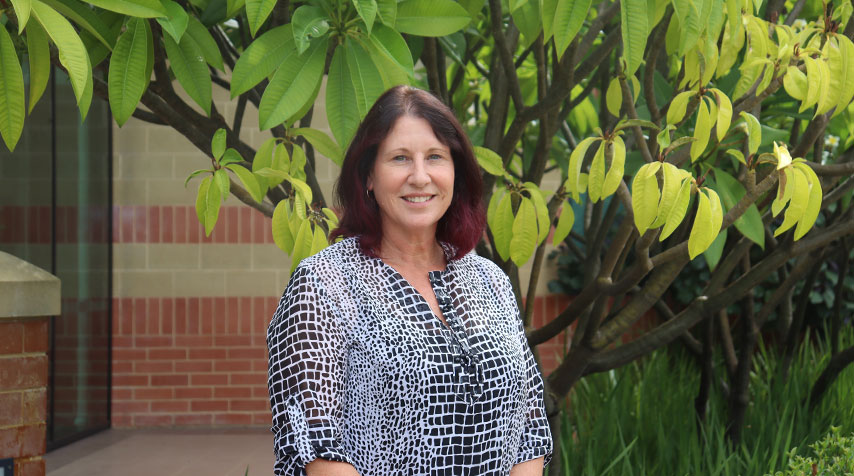 From troubled juvenile to PhD student.

This year’s Banksia Association Scholarship recipient is on course to become a Clinical Psychologist. It is the culmination of a rollercoaster journey of numerous obstacles and setbacks, varying jobs, confronting family realisations and moving across the country.

Joanne Scotney (Psych Hons 2021) was born in Brisbane in the late 1960s. Adopted at six weeks old, she grew up in the coal mining town of Ipswich in Queensland.

Her adoptive parents were blue collar workers. Both had to grow up incredibly quickly and neither had an opportunity to complete formal schooling. Lacking parental academic encouragement, Joanne was sent away aged just 15, to a remote sheep station 700km from home, between Charleville and Cunnamulla. Hired for domestic duties, she remembers celebrating her 16th birthday in the red dust and regular trips to a local pub in the days where IDs were often overlooked.

After a couple of years in the outback, Joanne moved back home but felt constrained by the family expectations of where her future lay. She started working at a Woolworth’s supermarket and loved it, but her parents were adamant that she needed to go to Nanny School and have a career working with children, or in domestic help like her Mother and Grandmother had.

“I said no and explained that I didn’t like children enough. That was their world and what they knew. My mother, and her mother before her, had both been in domestic service. I was enjoying it at the supermarket and was given more responsibilities and got promoted and was thriving there,” said Joanne.

Joanne’s conviction and certainty that her future lay elsewhere fell on deaf ears.

“They said, well, if you don’t want to be a Nanny, then leave the house and don’t come back.”

Barely 16, Joanne was discussing the issue with her Woolworth’s supervisor who offered to come over after work and help her pick up her stuff. Another girl in the lunchroom overheard the discussion and declared that she was looking to move out as well. They joined forces, looked at a place that very lunchtime and moved in together the same day.

Used to independence, nevertheless Joanne struggled with some elements of her newfound freedom, got in with the wrong crowd and was often in trouble with local police for minor offences.

“I didn't appreciate the system and I was too rebellious and headstrong and didn’t like authority. However, I was resilient too and soon realised I had to pull my head in. I knew the path I was on was no way to build a life,” said Joanne.

Perseverance saw Joanne awarded one of the very first traineeship scholarships in Queensland, whereby you worked for an employer for 75% of the time. They paid the majority of a salary, with the Government making up the difference. She attended the Sarina Russo Institute, picked up secretarial and office skills and began temping. A few jobs in, she had what she feels now was her big, lucky break.

“I was doing temp work for RCA Columbia at the time, which was part of the record and video industry, in telephone sales. They offered me a full-time role and I leapt at it. Turns out I am a natural salesperson!”

Joanne ended up winning accolades such as the best sales representative in Australia and began catching the eye of competitors. She was eventually poached and promoted by Roadshow Entertainment; an arm of the media company Village Roadshow which was involved in home video distribution. Moving swiftly through the ranks, she became a State Manager for sales.

Realising that any further career ascendency would be extremely limited, Joanne once again took a leap of faith and transferred within the company right across the country to Western Australia. Despite not knowing a soul, she began to slowly build a life in Perth. She soon moved across to the Blockbuster organisation, looking after all the stores during the growth phase from 2000-2005. However, it soon became evident that the industry was dying.

“We knew the writing was on the wall for the industry, I left and travelled the world for a couple of years and then when I returned, I took up a position as Franchise Manager for The Athlete’s Foot. Constant travel between three different states was so taxing and I realised I just wanted to be settled somewhere.” 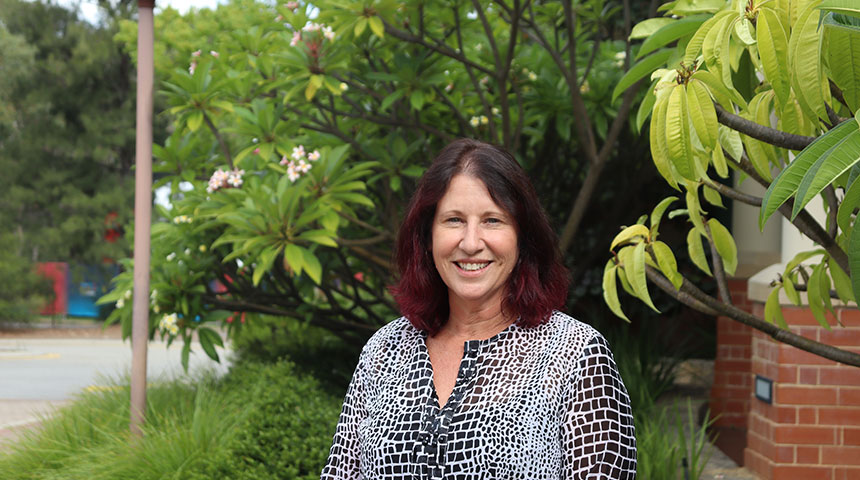 Determined to get ahead, Joanne took on a second job working evenings as a parcel sorter for Australia Post. A role that saw another fork in her road following a workplace accident.

“I was moving a carton of wine. Due to a wire barrier I over-extended and I felt something just rip from my groin and snap at my knee.”

The incident was the start of an incredibly difficult few years. Joanne had to give up her full-time role because of a lack of mobility. Her case involved years of dispute and litigation which ultimately bankrupted her. Operations, a possible hip replacement, inactivity, misdiagnosis, and the threat of being on opioids for life all took a heavy toll.

“I knew that if I didn’t have a focus that I would sink into depression and that maybe my life would take a turn where I may not be able to get back from. Having been self-driven and enjoying some career success, I knew it was becoming something that I wouldn't cope with. I had always had a love of education and a longing to go to university, but life hadn’t dealt me those cards. I realised I had to focus on something and decided to go to university,” she said.

Once she had made the decision, Joanne had to establish what subject would be best for her and what she would like to pursue for the rest of her working life. She adopted a very practical and realistic approach.

“I thought to myself… what can I do that is going to be age-appropriate for me? What's going to be within my physical limitations? And course, what do I feel like doing? With my life experience, personal approach to problems, coupled with the painful journey over recent years, I felt Psychology was the way forward,” said Joanne.

Enrolling at UWA to do her Bachelor of Psychology, Joanne knew from the outset that she had made the right choice.

She met many mentors during the degree, who really encouraged her pursuit of a new vocation. A few years later, one of the lecturers even offered her part-time work. She joined her team as a Project Co-ordinator on a LotteryWest funded project, looking at support interventions for children whose parents had either an acquired brain injury, or younger onset dementia.

“When I finished my degree, I didn’t score enough to get into the UWA Honours. I did not understand the system then and didn’t even know I could have applied to all the universities. A Global Health Professor saw me out one day and said, ‘Why don’t you consider doing a Masters in Public Health?’ I thought it was a good synergy with Psychology.”

Joanne completed a Masters, completing coursework and a dissertation, knowing that the research component was key if you want to go on and do further education.

She then applied to all the WA universities for Psychology Honours as well as a Graduate Diploma in Psychology at Murdoch, just in case she missed out on Honours again.

What she wasn’t aware of at the time was that it was the last year that she could apply to do Psychology Honours. If she had missed out, it would not ultimately count towards her individual registration at the Australian Psychology Board. Understandably relieved to be accepted at two universities for the Honours, Joanne chose Murdoch.

“I did my Honours with two great Supervisors; Associate Professor Hamid Sohrabi who is the Director of Murdoch’s Centre for Healthy Ageing, and Dr Belinda Brown who is the Deputy Director. It is the perfect synergy with where I want to be. When I first met Hamid, I made it very clear that I want to work in Ageing which excited him because not many people do. It’s not a ‘sexy’ area for a lot of young people. Working with the Centre’s Deputy Director, Dr. Belinda Brown, they have done so much preparatory work to ensure the Centre is positioned to improve the health span and quality of life in older adults. I am so excited to be doing my PhD with Hamid and Belinda as my primary supervisor and work on an internationally recognised study,” said Joanne.

This is the latest step in a long academic journey for Joanne. She has been at university since enrolling in 2014 at the age of 46, all while balancing the demands with two part-time roles and a mortgage.

This is why being chosen as the recipient of the 2020 Banksia Association Honours Scholarship made such a difference to her.

“I was working at Australia Post from 3:30am until 12:30pm, Monday, Wednesday, and Friday. In addition, on Tuesdays, I was doing a full day at Brightwater working on the support intervention research project. All while trying to complete my Honours as a full-time student. Frankly, it was brutal.”

The Banksia scholarship enabled her to give up one of the roles and thus provided a small window in which to work on her thesis. Though still not ideal, Joanne feels it was a lifesaver.

“It did make a huge difference. It saved my sanity, because I was burning the candle at both ends and it was really taking its toll. It also enabled me to buy a second monitor and computer/software that enabled me to analyse the data in my own time and not have to come onto campus. Just those little things can make a huge difference in terms of time and results. I’m so grateful.”

Focusing ultimately on getting a PhD and officially endorsed as a Clinical Psychologist, Joanne continues to kick goals. She remains the only person in her family to go to university. Throughout the years documented here, she also went through the mammoth upheaval of meeting her biological parents, discovering she had a brother, reconciling with her adoptive mother and establishing fruitful and healthy relationships with long lost family. All undeniably impressive groundwork, as well as an invaluable foundation for a Psychologist aiming to improve quality of life for us all.