Exceptional alumni honoured at the Arena 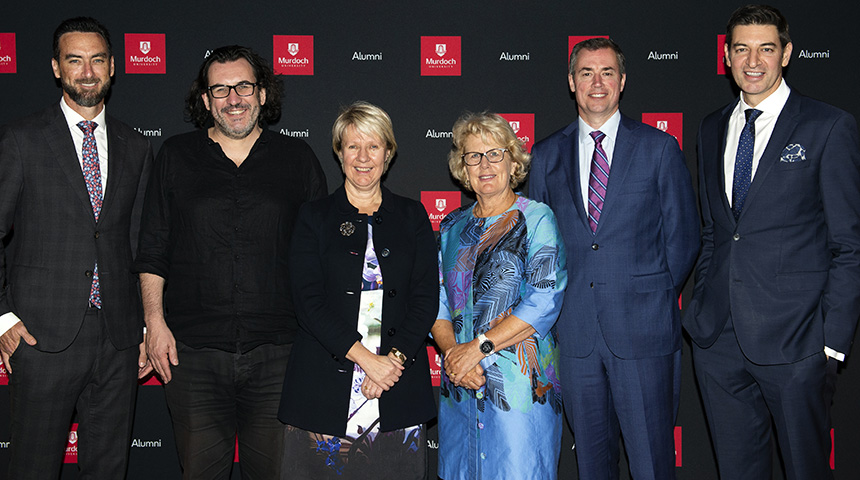 The extraordinary careers of five Murdoch University graduates were celebrated in front of the University’s leading academics, alumni, VIPs and government representatives at the 2019 Distinguished Alumni Awards.

The awards recognise the outstanding professional and personal achievements of former students. Fittingly, this year’s awards ceremony was held at a venue very familiar with star performers – the RAC Arena.

The award winners represent a varied cross-section of achievement across advertising, law, politics and justice, journalism and government, a clear indication of the diverse doorways that Murdoch University opens for its graduates.

It really did help me find my way in life. The academics and staff at the university continue to create a progressive culture that allows misfits like myself to shine.”

Barrister and former Federal Member for Perth, Tim Hammond (LLB 1999), was the second recipient of the night. He said working in Murdoch’s SCALES community legal service opened his eyes as he got to work in a Rockingham legal centre with real people facing real problems.

“It came along at an important time in my life. The way it transferred theoretical values about what is important about the law into what it means to help people was something that set me on a path that otherwise I wouldn’t have gone on. It put me on a path through the law, and politics, where I was able to translate values I had swirling around internally into action,” he said.

“Perhaps what I’m most grateful for is the structures that were created for me at my time at university and the way it allowed me to articulate and to prosecute my values professionally. It served me in a way I would never been able to foresee. I don’t think I would have the courage to leave politics 12 months ago, but for the way key people taught me how to prosecute my values back when I was studying my law degree.“

Fellow former Federal MP Michael Keenan (BA 1995) said university taught him that in life, you have really got to be a self-starter, set your own goals and decide what you want to achieve, and you can’t wait for people to give you permission to achieve it.

It also taught me how to make sensible and cogent arguments for things you believed in, things that were against the prevailing views of the time. The skills were really useful for me and I subsequently took them into my political career later in life.”

It was Murdoch’s flexible learning options that paved the way for fourth recipient Gail McGowan (BEd 1992, Dip 1994), Director General of the Department of Planning, Lands and Heritage for Western Australia.

As a regionally-based young mum of three, she was able to benefit from Murdoch’s commitment to both alternate tertiary study options and accessibility for mature age students.

Despite the fact Gail had finished Year 12 ten years earlier and couldn’t attend lectures, she was grateful for Murdoch allowing her to explore a whole new world in her own time and at her own pace.

“My closest relationship was with the green cover sheet on my assignments, something that I waited for anxiously at the post office seeking that vital feedback. But behind those green sheets of paper were committed staff who were sensitive to the challenges of being off campus. The support I received enabled me to embrace the concept of lifelong learning and when I returned to Perth in my final year of undergraduate study, I discovered the value of a university community. I was inspired to undertake post-graduate study in public policy, an area that became my passion as I forged a career in the public service.

"The Murdoch ethos of out of the box thinking and multi-disciplinary knowledge has really shaped my career and positioned me well to promote a whole of government mindset – something I find quite easy to do and I am sure it was the Murdoch edge that helped in that. And now I lead a fabulous government agency charged with shaping the future of this great City and State, while respecting our culture and heritage. Even I have to stop from time to time and think... that’s not bad for a farm girl from Darkan!

I’m grateful for my ongoing involvement in Murdoch – an institution that has proud history of being at the leading edge of what it means to learn, work and think a bit differently, but nonetheless relevantly in a global environment.”

It was the practical experience that Basil had in Murdoch’s radio studios that put him in good stead for his subsequent career success.

“I gained expertise in studios that were as good in 1990 as the 6PR studios are now in 2019! The opportunity to go into a studio, turn on the microphone and broadcast was a gift. One I didn’t even realise at the time that was putting me so far ahead of my competition it was not funny. It was a remarkable opportunity and one that still exists at university,” he said.

He added that possibly the most important thing he learned at Murdoch was the importance of resilience.

“I learned the value and benefits and joy of it. As I have discovered on my journey, and other journeys I have observed, you don’t have to be the best, the smartest, or the funniest. Sometimes you just have to be the most determined person to be there, to be there again, get knocked down, but continue and just keep going, because so many people will not.”

Speaking at the event, Murdoch University Vice Chancellor Eeva Leinonen said each of the alumni were leaders in their field, and a terrific example of the opportunities higher education can open up to the community.

“Every single student who graduates from Murdoch University leaves with the opportunity and the skills to make it to the top of their game,” she said.

“The personal journeys of the five recipients are both inspiring stories and a reminder of how the curiosity and passion that Murdoch University ignites can lead to pioneering careers that make such a difference to our world.”