Fitting honour for man of the skies

Alumnus Sam Todhunter (BSc General Studies 2003) has just been awarded a Member of the Order of Australia in the 2021 Australia Day Honours for service to aviation.

Now based in the sunshine state of Queensland, we caught up with Sam who’s still flying, physically and metaphorically, and remains a living exponent of the power of lifelong learning.

He was born in the country town of Margaret River in 1932, some 35 years before Vasse Felix opened as the region’s founding wine estate. Early life was shaped by the backdrop of the second world war, which ended when Sam was 13.

“The war was a dominant factor in how youngsters viewed the world and its heroes. Career decisions were formed against this wartime background. Communication was basic: gravel roads, a railway line, a few cars, and telephone lines with not everyone having a phone. Our horizon was permanently elevated by the tall trees surrounding the small town, and we only glimpsed the true horizon on our wonderful visits to the beach,” said Sam.

Education at Margaret River was a dedicated undertaking. The local school was made up of forty students and two teachers who commanded the utmost respect. Sam is eternally grateful to the sacrifices his parents made which enabled him and his brother Tom to receive an education. This involved leaving home at 13 to attend Bunbury High School, where he secured his Leaving and Matriculation certificates before seeking work.

“Work opportunities were abundant just after the war. I took two opportunities with the Postmaster-General's Department (PMG) before my basic passion took hold and I became an RAAF pilot.  The Korean war had started, and I began a wonderful segment of my life. Teaching and instruction was a significant part of my operational activity. I remained in the RAAF for 17 years, then resigned my commission after serving in two wars. This decision was prompted by an opportunity to join the Department of Civil Aviation where I spent 18 wonderful years. This took me to Papua New Guinea and into the Central Office in Canberra where my enthusiasm for aviation was upheld.” 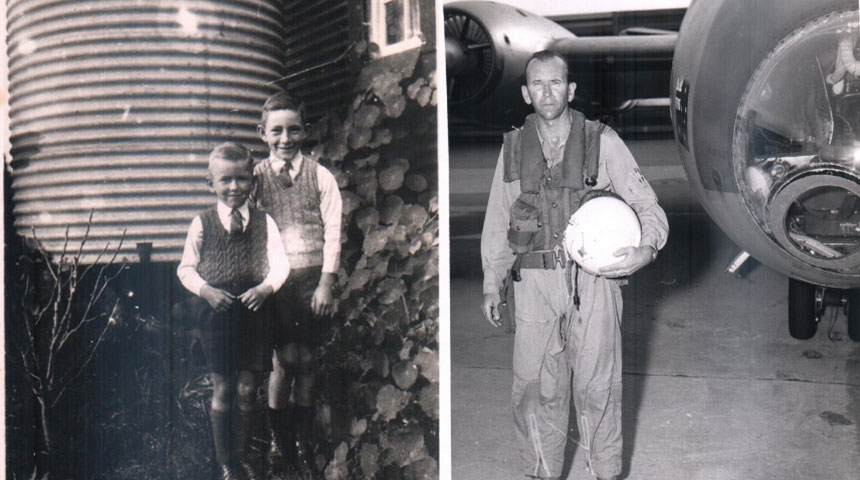 Shortly, Sam’s urge to return to WA was energised by an old RAAF friend. Joining forces, they started AVWest, an aviation training school and charter business at Jandakot. Sam's son Robert followed in his footsteps becoming a pilot working for the company and Sam also trained his grandson Stewart, who continues the family's aeronautical lineage.

Outside of his professional life, Sam has always been keen on study and harboured a desire to attend what he saw as the epitome in learning – a university. At the turn of the millennium this became a reality as he embarked on a Murdoch degree as an external student.

“This too was a wonderful and very enlightening experience. I enjoyed every moment and was buoyed by great people such as Penhale Martin and Professor Mike Calver. Having their confidence was wonderful support and visits to the University always filled me with awe. Murdoch has provided me with stability and confidence in the latter days of my life,” said Sam.

Graduating at 71 years young, Sam remained active in aviation throughout and continues to teach young pilots to this day.

With his children based on the east coast, Sam and his wife headed over from Perth to be closer as a family but sadly, shortly after, he became a widower. His daughter Sharon recounted how she had observed his thirst for knowledge over the years.

"I recall him coming home to Perth after the war and we would all go to the WAFL on Saturdays to watch Perth Demons play with my mother's parents and Dad would have his study notes with him at the game, concentrating on some math problem or other that required his attention, regardless of the fierce barracking going on around him.  I've never known him not to be studying something. He's just enrolled at the University of Southern Queensland for another series of algebra and calculus," she said.

With periodic trips back to WA to teach aviation, Sam’s life took another twist nine years ago following a chance meeting with an aviator who ran the Lismore Flying Club in the northern tip of NSW.

“We became firm friends and I have been spending two to three days each week ever since at Lismore, involved in flying training. I know I have been fortunate to have been given a good start to my life and know the importance of good health. Keeping one’s mind active is important in retirement. The OAM gives me great satisfaction and confirms that my life has been well spent so far.”