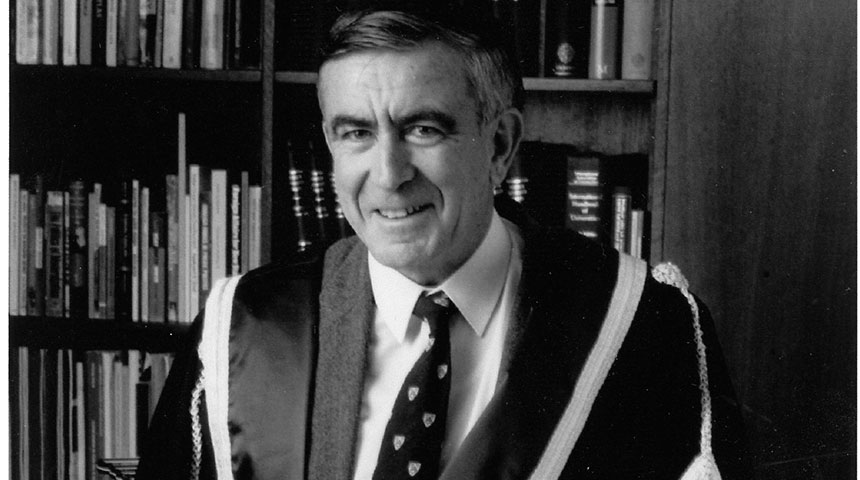 The Murdoch University Community is mourning the loss of former Vice Chancellor Emeritus Professor Peter Boyce AO, who passed away at home in Tasmania on 7 August 2021.

From 1985 to 1996 he served as Murdoch University’s third Vice Chancellor, following which he was awarded visiting fellowships at two Oxford colleges. He was the first Australian-born Vice Chancellor to lead a WA university.

As Murdoch’s longest serving Vice Chancellor, Professor Boyce oversaw enormous expansion in both university infrastructure and the teaching curriculum.  Student enrolment more than doubled from 4,000 to over 9,000 and Murdoch University became a truly international university, not only in terms of its international student numbers, but also in terms of the number of exchange agreements and its research performance. The University's pace of growth was reflected by the number of new buildings that were built during these years including the Economics, Commerce and Law building, Science and Computing building, Administration building (The Chancellery), Loneragan science building, Amenities building, Gymnasium, and major extensions to the Library.

Two years into his tenure the University established the Asia Research Centre which was subsequently award a grant of over $6 million by the Australian Research Council in 1990. While Vice Chancellor, Peter managed the establishment of Murdoch’s School of Law in 1992 and a year later celebrated Murdoch’s first overseas graduates, when 128 Singapore students received their testamurs at Murdoch’s very first international graduation ceremony.

“When Peter Boyce was appointed to the position of Vice Chancellor, I was Deputy Vice Chancellor and Business Manager, so we had a close and harmonious working relationship until I left Murdoch in June 1989. I had known Peter previously as we both attended Wesley College at the same time although he was a few years ahead of me.  I recall how highly he was respected at Wesley being both school captain and dux, so I knew Murdoch was fortunate to have an outstanding academic as Vice Chancellor,” said Professor Nairn.

Following his move to Tasmania, Professor Boyce became an Adjunct Professor in the University of Tasmania’s Politics and International Relations Program and was an Honorary Research Fellow at the University’s School of Government. He also served as President of Australian Institute of International Affairs (Tasmania).

In 1995 Peter Boyce was made an Officer in the Order of Australia “for services to education, international relations and the community.”

Professor Boyce’s contribution was invaluable to the growth and development of Murdoch University. The University doubled in size during his first six years at the helm and research income went up fivefold during his Vice Chancellorship. Professor Boyce’s vision and progressive stewardship took Murdoch from an uncertain adolescence, through to a solid and highly respected maturity, all under a cloud of possible amalgamation with another WA university.

At his leaving function outside the Chancellery in 1996 he commented that universities should always be places of ‘liberty, learning and light’.  Thanks to his significant personal legacy, the university continues to flourish and strive for those succinct and noble ideals.