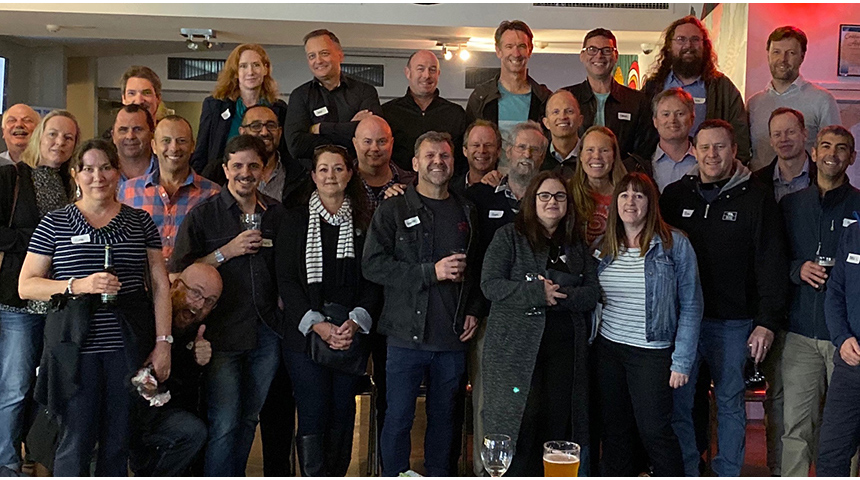 Rather than be ‘haunted’ by a return to the hallowed halls of Murdoch University, on a cold, wet and blustery Halloween night, a large group of Murdoch Metallurgists braved the elements to celebrate 25 years (or near enough) since graduation.

Many had not stepped foot on the campus since, so what better place to congregate than the Murdoch Tavern.

The group of around 45 former Murdoch Metallurgy students and lecturers, who began their studies in 1992/93 were drawn from far and wide for the occasion. It provided a great opportunity to reacquaint, reflect, reminisce and retell favourite stories. Bonds forged during the trials and tribulations of yesteryear were quickly reaffirmed. Complemented by a slide show of photos and even an old inter-year football match (flannel shirts and long hair was the common theme), the hours passed quickly concluding with a commitment to ‘do it all again’.

For those that were extra keen to relive their student experience, the reunion was preceded by a tour of the current chemistry, mineral processing and engineering laboratories, a real blast from the past!

Special thanks go to Gamini Senanayake and his team for facilitating the tour, the Murdoch Alumni Relations team for supporting the catering and tracking down some of the more elusive contact details of this cohort. We also thank Simon Turner and the friendly staff at The Tavern for putting up with the former students and lecturers – although based on some of the stories spun on the night, they are evidently not quite so rowdy as they once were.

If you would like to organise an alumni reunion for your peers, Simon has some valuable tips to help get it off the ground.

1.   Have a group socially tight enough to want to have one of these in the first place. It isn’t something that can be manipulated.

2.   Have someone from your group take the lead, and then get secondary support from other key influencers in your year.

3.   Build the momentum, commitment, buy in and then create a sense of fear of missing out among the fence sitters

4.   Deliver it with the help of others. For us, it was good that there were no road blocks and that it was a simple event that was relatively easy to organise.


If you need some assistance with your reunion, please get in touch with the Alumni Relations team who can help with event logistics such as invitation distribution and catering support.