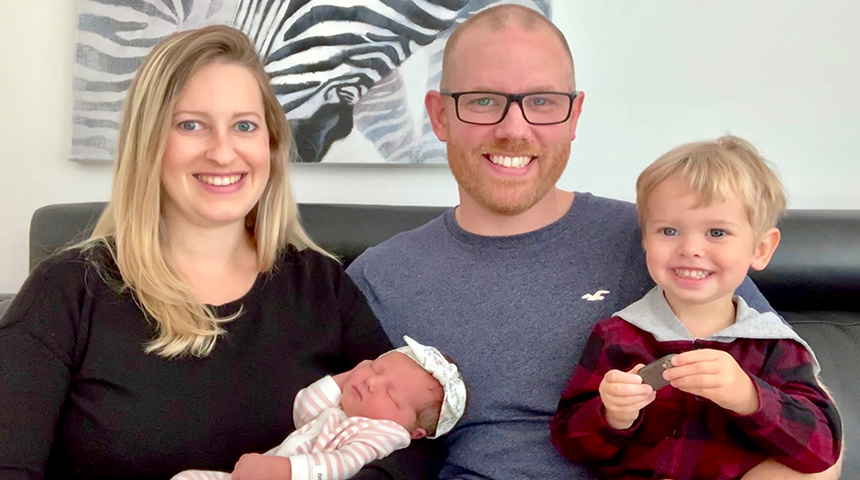 Alumnus Martin Isaksson is a chiropractor, lecturer, and the current medical advisor for RockTape Scandinavia. Working alongside his wife Sarah, Isaksson is also the owner and manager of a chiropractic clinic based in Falkenberg, Sweden.

Martin (BSc, 2013) and Sarah (BSc, 2013) met while studying Chiropractic Science at Murdoch University, and graduated the same year. They married in 2016 and have since welcomed two children, Alexander and Katelyn, into the world.

When discussing why he chose to study the chiropractic discipline at Murdoch, Isaksson said it was the quality of the program and teaching staff that really drew him to Perth.

“I applied to Murdoch because it was at the forefront of academic teaching for a chiropractic program,” he said.

“I consider myself lucky to have had such an amazing line-up of highly respectable academic chiropractors teaching the program. That was the biggest selling point for me to study in Australia.”

Treating a range of patients, from infants through to geriatric patients, as well as several high-level athletes who attend the clinic for their check-ups, Isaksson draws from a wealth of experience and says that serving his community is the most rewarding part of his job.

In fact, it was his own experience on the treatment table that first inspired him to study chiropractic science.

“The first time I received chiropractic treatment I was 18 years old,” he said.

“I was having a lot of trouble with my knee. I had been going to a physiotherapist for six months and seen many specialists without relief for my complaint. Eventually I saw a chiropractor who, 15 minutes into taking my history, said that he could easily help me get rid of the pain. 10 minutes later, I got off the treatment table and my knee issues were gone.

“He told me that all things in our body are connected, but that we often don’t look close enough to figure out where the problem is, and that most of the time the problem isn’t actually where we feel the pain or dysfunction.”

Since graduating from Murdoch, Isaksson has been hard at work trying to improve as many lives as he can.

“In 2014 I founded the Swedish Chiropractic Sports Council and still serve as the president,” he said.

“I’ve volunteered as a chiropractor at 27 international and national sports events. My biggest achievement would have to be when I served in the polyclinic at the 2016 Rio Olympic Games.”