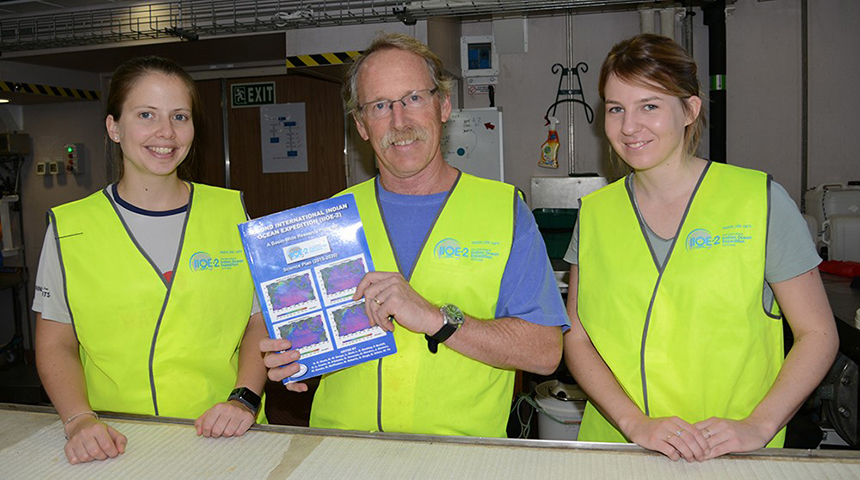 Three Murdoch University graduates were on board the CSIRO vessel RV Investigator as it headed off on a 32-day voyage to explore the environment of the Indian Ocean basin last month.

Returning on 14 June, the voyage was part of the second International Indian Ocean Expedition (IIOE-2) and investigated the impacts of climate change and rising sea temperatures on our ocean’s biodiversity.

The expedition was the second of its type in history, with the original carried out almost 60 years ago between 1962 and 1965. The study combined the forces of researchers from 18 different institutions with data collected approximately 500-600 km offshore of the west coast of Australia.

Professor Lynnath Beckley of Murdoch University was the Chief Scientist on this voyage of the IIOE-2. She was joined by Honours student Daniel Cohen (B Science, 2018), and alumni Danielle Hodgkinson (Hons Science, 2018) and Claire Davies (M Science, 2007) who were among 40 marine scientists and technicians on board collecting water samples and studying organisms found in the deep oceanic waters of the Indian Ocean.

When asked about their experience on board the Investigator, all three agreed it was the opportunity of a lifetime.

“The voyage has been a great opportunity for me and working with eminent scientists such as Professor Mike Landry and Professor Raleigh Hood has allowed me to broaden my knowledge,” said Claire.

With the multidisciplinary approach to the voyage, the wide range of samples and data collected and the level of collaboration planned, the outcomes and publications should be outstanding.”

“Exploring the Indian Ocean on the Investigator was a truly incredible experience filled with the excitement of each net haul, the challenge of long days of hard work and the satisfaction after a successful day at sea,” said Daniel.

"The experience and knowledge I've gained through this expedition is invaluable,” said Danielle.

I've been involved with and witnessed all disciplines of marine science from biology to physical oceanography and bio-optics all in the one voyage, and I've enjoyed every aspect of this once in a lifetime opportunity."

Data from this voyage will be compared to that of the original in order to determine changes to the marine environment over the last 60 years.

More information on the second International Indian Ocean Expedition can be found at the expedition website.

If you'd like to learn more about anything discussed in this article, please contact our Alumni Relations team.