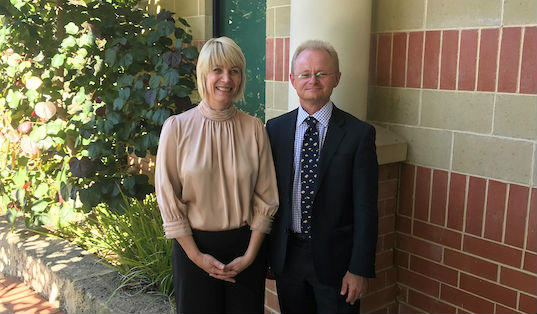 Chief Veterinary Officer of Australia (ACVO) and alumnus Dr Mark Schipp visited Murdoch University in May to discuss the responsibilities of the role, the choices that led him to the position of ACVO and some of the issues facing today’s vets.

Since graduating from Murdoch in 1989 Dr Schipp has built a decorated career.

Appointed Chief Veterinary Officer of Australia in 2011, he started his career as a District Veterinary Officer servicing the Geraldton area before moving on to export abattoirs in Western Australia, Victoria and Tasmania. His primary role in the abattoirs was to ensure the welfare of livestock due to be sent overseas and company compliance with legislation.

From the abattoirs Mark headed off to North Asia, where he lived for six years. Based first in South Korea and then China, Mark opened the Agriculture Counsellor post in Beijing and negotiated market access for Australian exports.

After returning to Australia, Mark took up the Chief Veterinary Officer of Australia role, first in an acting capacity during the Indonesian live export ban and then permanently.

During his tenure he has also been appointed Australian Delegate at the World Organisation for Animal Health (OIE) in 2013 and was later elected President of the OIE World Assembly. While representing Australia Mark has endeavoured to strengthen member countries engagement and participation with OIE standards.

The primary objective of the ACVO is to advise the Australian Government on all matters relating to the maintenance and improvement of Australia’s animal health status and the systems that support it. The work includes a focus on addressing major animal health issues of national interest such as the threat of antimicrobial resistance.

As an OIE Delegate, Mark aims to protect Australia’s biosecurity, represent Australia’s trade interests and influence the development of international standards and policies.

In an earlier interview with Animal Health Australia, Mark reflected on the twists and turns of his career trajectory.

“Sir Walter Murdoch, the prominent Australian author and philosopher after which Murdoch University was named, once reflected on his inability to pursue studies in medicine: ‘There are probably people alive, who would not be alive if I had been their physician,” said Mark.


I think the same can be said of me not entering clinical practice – there are probably animals alive today that would not be alive if I had been their veterinarian!

When discussing future challenges facing veterinarians Mark highlighted the need to combat antibiotic resistance, citing overuse in livestock and the connection this has to resistance in humans.

“When veterinarians are engaged in understanding and combatting emerging infectious and zoonotic diseases they ensure better human health too,” he said.

Mark concluded his presentation by outlining the ways in which his office can work more closely with Murdoch University in the future. These included the promotion of Government vet career pathways and establishing the University as a focal point for national and international animal health issues.

If you'd like to learn more about anything discussed in this article, please contact our Alumni Relations team.