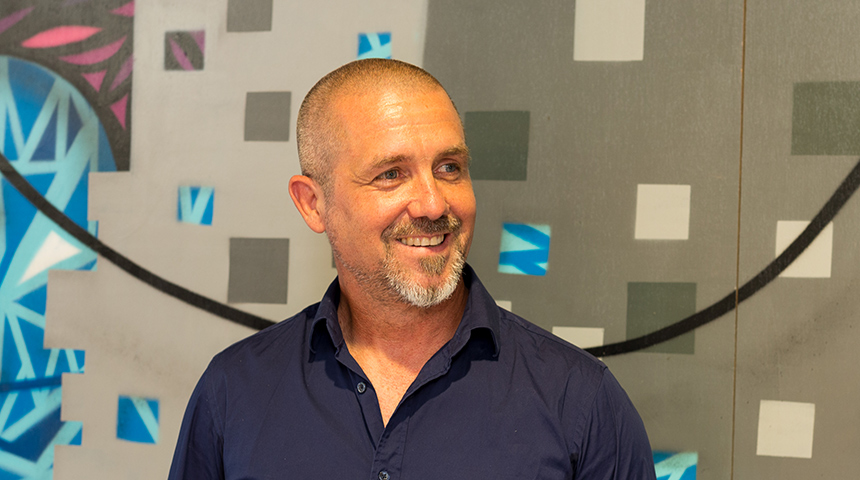 A senior lecturer in politics and international relations with a specialisation in South East Asian politics and society, Dr Ian Wilson is the Academic Chair of Murdoch's Global Security program, and a Research Fellow at the Asia Research Centre.

Dr Wilson's passion for South East Asian culture and Murdoch has been a lifelong endeavour.

"Prior to studying a Bachelor of Arts with honours in Asian Studies at Murdoch, I spent some years living and travelling through Indonesia, including a period studying and later teaching the Indonesian martial art Pencak Silat.

"I represented Australia in the 2001 Pencak Silat World Championships and its history and politics would later become the subject of my PhD."

After completing his PhD in 2003, Dr Wilson began working at Murdoch soon after in 2004, where he has been ever since.

"I also have a long family connection to Murdoch via my late father, Sir Ronald Wilson, who was Chancellor of Murdoch from 1980 to 1995."

A central theme in Dr Wilson's research work in South East Asia has been the relationship between power, violence and representation, pursued through two major interrelated research agendas.

The first of these agendas has been focused on what is referred to in Indonesia as preman, a colloquial term for thug or gangster, but more broadly understood as a particular kind of politics involving coercion and extortion.

"Through an examination of political gangsterism I have attempted to outline a broader theory of power and state formation and transformation, particularly in Indonesia’s post-authoritarian era.

"Of particular interest has been how and why the poor and socially marginal communities have been drawn into often violent and repressive organisations. As I have found, many do so ‘strategically’ out of a quest for material needs and as protection against various social and economic risks.

Dr Wilson's second research agenda has focused on the politics of poverty in Southeast Asia, a project he has pursued in collaboration with colleagues Associate Professor Jane Hutchison and Associate Professor Caroline Hughes, with support from an ARC Discovery Grant.

"We approach poverty not as a measure of daily income but as an unequal social relation in which the poor are dependent upon the more powerful for basic needs. This produces particular kinds of strategies, relationships, actions and political logics that are frequently misunderstood, overlooked or exacerbated. We argue that the poor have a distinctive kind of politics that is engendered by the conditions constitutive of poverty.

"If we wish to address poverty and help the poor, we need to understand this. Poor people are already operating politically in everyday struggles to survive and prosper, so efforts to ‘empower’ them need to take account of the political processes they are already engaged in, and which they cannot easily exit."

At the core of both of Dr Wilson's project is an aim to produce new understandings and insights into complex areas of socio-political life, with the hope of contributing to a more just and equitable world.

Research with a real-world impact

As one of Murdoch's leading academics and researchers, Dr Wilson strives for his research to have an impact in the real world.

"One of my most satisfying achievements to date has been seeing my work engaged with as a part of important public discussions and policy debates. My work on Jakarta’s urban poor and the political economy of urban policy for example, became a part of debates in Jakarta’s elections."

According to New Mandala, an online journal which provides anecdote, analysis and new perspectives on Southeast Asia, Dr Wilson's article Jakarta: Inequality and the Poverty of Elite Pluralism, “set the terms of the debate over what Jakarta’s gubernatorial election was about”.

The Indonesian translation of Dr Wilson's book The Politics of Protection Rackets, which was published in Indonesia in 2019, has also received significant attention, becoming a ‘go to’ source in discussions regarding political gangsterism.

"Having several hundred people turn up to my book launch events, enthusiastically asking questions and debating with me about my work, was both exciting and humbling.

"I feel very strongly that as academics we should endeavour to make our work accessible to the broader public and contribute to public discourse."

A self-described lifer at Murdoch University, Dr Wilson has long appreciated it's focus on small classes as both an academic and former student.

"One of the benefits of smaller-size universities has been the student to staff ratio, which allows for more direct engagement between students and teaching staff than you’ll experience at larger or ‘sandstone’ universities. This has been something I’ve enjoyed at Murdoch as both a student and now as an academic.

"Another highlight of teaching at Murdoch has been Murdoch’s historical commitment to social justice and social transformation. This has been something of a family tradition, and one I am proud to be an active part of."

"Note-taking is a really crucial skill that is more than simply writing down what you think you need to know for exams, but a process by which you make knowledge your own. Good notes are an invaluable resource.

"Asking questions may seem obvious but students can often be hesitant or embarrassed to ask what they fear will be a ‘stupid’ or ‘obvious’ questions. The bottom line is you won't know, until you ask."

Dr Wilson's top 5 tips for making the most of your university experience:

1. Plan. We all have busy lives with competing demands on our time and attention. Developing study routines and planning ahead for assignments and busy periods is crucial for keeping on top of things and doing well.

2. Seek advice. There are lots of resources available to help students in every aspect of university life. Take the time to see what’s available and what may helpful for you.

3. Find something that sparks your interest/imagination. We live in interesting but uncertain times with societies, markets and our lived environment changing rapidly. Pursuing an area that really captures your imagination, stimulates curiosity or drives you is perhaps the ‘safest’ bet when it comes to being successful, be that in terms of a job, career, your own self-development or making a contribution to the world.

4. Don’t be afraid to mix things up. It’s a truism that some of the most creative and insightful thinking comes from unexpected or unusual interactions and cross-fertilisations. If there is an area or unit that looks interesting but may seem peripheral to your main degree, go check it out.

5. Take time out. Doing things that you enjoy, are relaxing or fun isn’t a waste of time, and helps clear your mind and keep things in perspective (except if you have an assignment due tomorrow!).