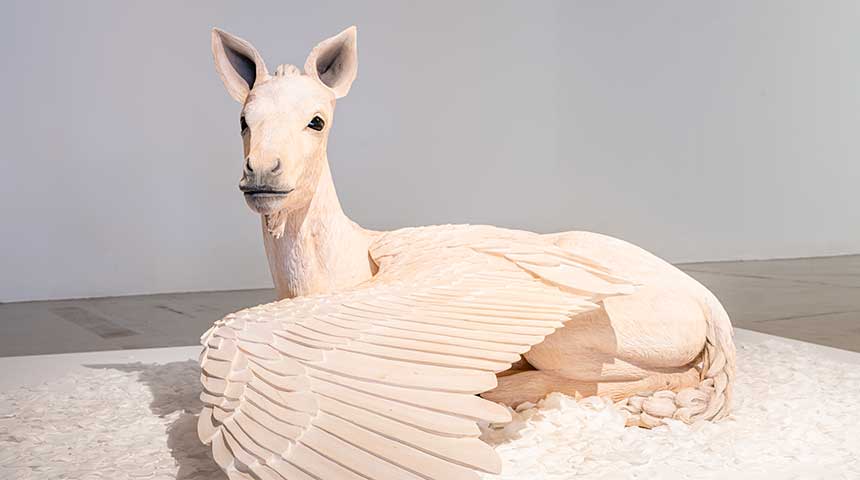 The latest acquisition to the Murdoch University Art Collection is a stunning carved wooden sculpture that evokes the plight of migrant populations.

Created by nationally recognised artist Abdul-Rahman Abdullah, Buraq depicts a striking, winged horse named after an enigmatic figure of Islamic lore. The name is said to have derived from the Arabic word for lightning, something that is vividly real, yet fleeting and immaterial.

Alluded to in the Quran, Buraq is best characterized as the beautiful, winged horse-like creature that transported the Prophet Muhammad in a single night from Mecca to Jerusalem and ascending to the heavens beyond, described in the Surah-Al-Isra (The Night Journey).

The creature and the journey undertaken have been elaborated upon over the last 1400 years. Buraq has been depicted in many ways, most commonly with a human head.

For the children of migrants, there is often a mythologized journey at the core of their outlook. Family histories of relatives undertaking a fraught passage that has shaped current circumstances.

Abdul-Rahman’s family is no different, whether it be the arrival of his mother in Australia, or the migratory journeys of his ancestors between the Malay peninsula and the islands of Sulawesi, Borneo, and Sumatra.

Reflecting on these waves of migration, Abdul-Rahman explained that “when people are required to commit themselves to a seemingly impossible journey, a divine precedence may offer the necessary wings.”

This is Murdoch’s second acquisition of the artist’s work. In 2013, an earlier example of Abdul-Rahman’s sculpture titled ‘I’ve been assured that you’re going to heaven my friend’  was purchased by Murdoch University’s Art Curator Mark Stewart from the artist’s first solo exhibition at a commercial gallery. 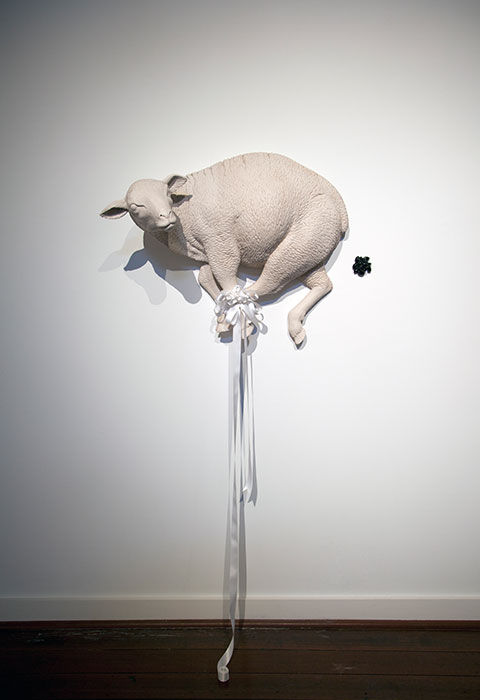 In this artwork, Abdul-Rahman conveys a childhood memory of growing up as part of a Muslim family and witnessing the cultural practice of halal slaughtering, carried out on a lamb by his father in the backyard of their Victoria Park home during the 1980s. Through a child’s lens, Abdul-Rahman poetically depicts the lamb as a spiritual being floating off the wall and ascending to the sky above.

Mark Stewart notes that although these acquisitions were made seven years apart, there is a fascinating dialogue between the two sculptures. Aside from the obvious comparison in their subject matter of animal archetypes, both sculptures share a narrative relating to a physical and spiritual journey ascending from earth to the heavens and beyond.