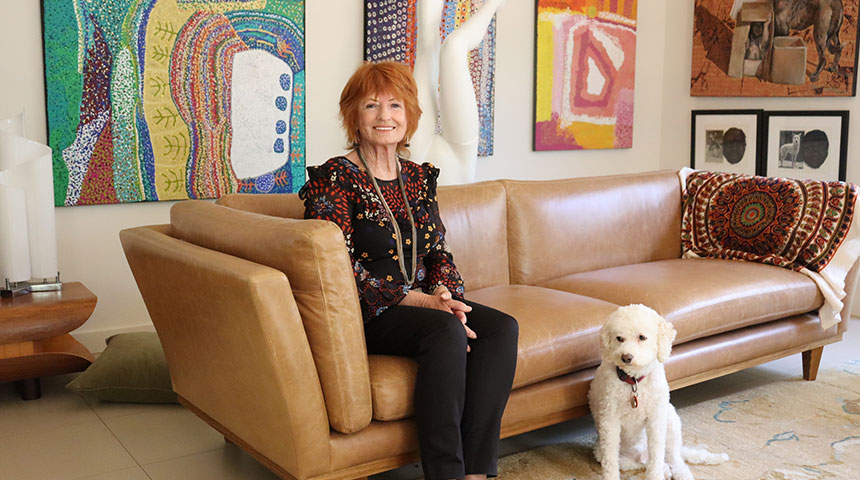 The Murdoch University Art Collection owes a considerable debt to the generosity of its donors. Art lovers whose altruism over the last 46 years has added a richness and unforeseen diversity to the work. ​

One such philanthropist is Kate O’Brien who has enjoyed a long and rewarding association with the University over many years.

Admitted to legal practice in 1977, Kate spent the first 20 years of her career as a criminal lawyer.

A strong commitment to equity led Kate to take up roles as Counsel Assisting the Royal Commission into Aboriginal Deaths in Custody and the part-time position of Deputy President of the Equal Opportunity Tribunal (WA).

Through her Presidency of the Criminal Lawyers Association and the Law Society of Western Australia, and as State delegate to the Law Council of Australia, she played a vital part in shaping the progress of WA’s legal profession.

Kate was a member of the Murdoch University Senate for 7 years and during that time she was elected as Pro-Chancellor for a number of years.

“Being on the Senate opened my eyes to the enormous job of running and governing a University.  It was very rewarding to work with people from disparate backgrounds and experience.  I was impressed by the Senators’ diligence and rigour in addressing quite complex and, sometimes quite controversial matters,” said Kate.

In addition to her Senate responsibilities, Kate was a key member of the Murdoch University Art Board for over a decade and oversaw a significant expansion in the scope of the collection.

“During that time the collection grew not only in size but also in strategic direction.  That is a measure of the wide knowledge and experience of the Art Board members.  We worked as a cohesive group and strictly followed the governance procedures which were developed during my time on the Board.  Perhaps the best thing we did early on was to employ the Collection's first full-time curator. Mark Stewart’s enthusiasm and eye for quality art helped the Board enormously,” she said.

Currently a member of Murdoch’s Banksia Association and the Vice Chancellor’s Banksia Association Advisory Committee, Kate’s exemplary legal career and service to higher education saw her receive the highest honours from Murdoch. In 2008 she was awarded an honorary Doctorate of Laws and an honorary Doctorate of the University at the annual graduation ceremony.

It is highly unlikely however that you’ll see these accolades on her wall as nearly all corners of Kate’s beautiful home are filled with art. The colourful rooms reflecting a personal taste that evolved during her years in the legal profession which often took her to some very remote locations.

“I started off collecting figurative pictures.  I’ve been fortunate to travel to many remote Indigenous communities which stimulated my attraction to Indigenous art.  It’s beautiful to see the artists at work in their own communities and to see their spectacular country and their Tjukurpa reflected in their art,” she said.

When pressed, Kate found it difficult to shortlist her favourite artists, but did express her appreciation of a fellow Murdoch honorary degree recipient.

“I really admire the work of Julie Dowling (Doctorate of Literature 2006). Her vast output centres on her life and that of her extended family and her Aboriginal heritage.  Her work is not only beautifully painted, but each painting tells a story.  The stories are very moving and her painting is exquisite.”

When considering the question of why she donates art to Murdoch in particular, Kate summed it up with a concise vision and clarity that no doubt graced many a courtroom over the years.

“The element that distinguishes Murdoch from other universities that I have been connected with is the ambience and the care that the staff take for the students of this beautiful campus. When I was on both the Senate and the Art Board, there was a real inclusivity about the way that everything was handled. The art is a significant part of the public face of the University. The students and staff see it, relax in front of it, and talk about it. Since 2002 I have enjoyed an affectionate and ongoing association with this university that has enriched my life.”

Presently, Kate spends her time in retirement volunteering as a legal member of the Mental Health Tribunal and as a coordinator and tutor with Read Write Now, an organisation which supports adult literacy.  Kate also is taking piano lessons over 50 years since her last lesson at school and is learning tap dancing which she says will never secure her a role in A Chorus Line, but which is great fun. 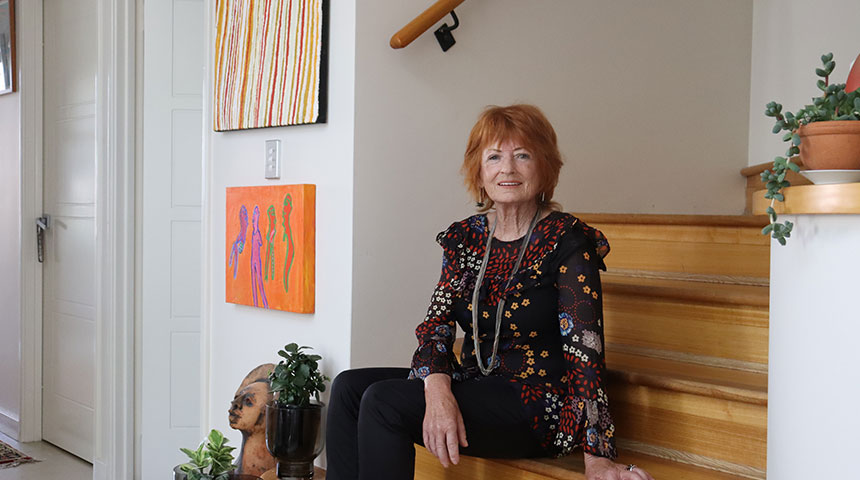