From Bristol beatnik to Bali and the Biennale 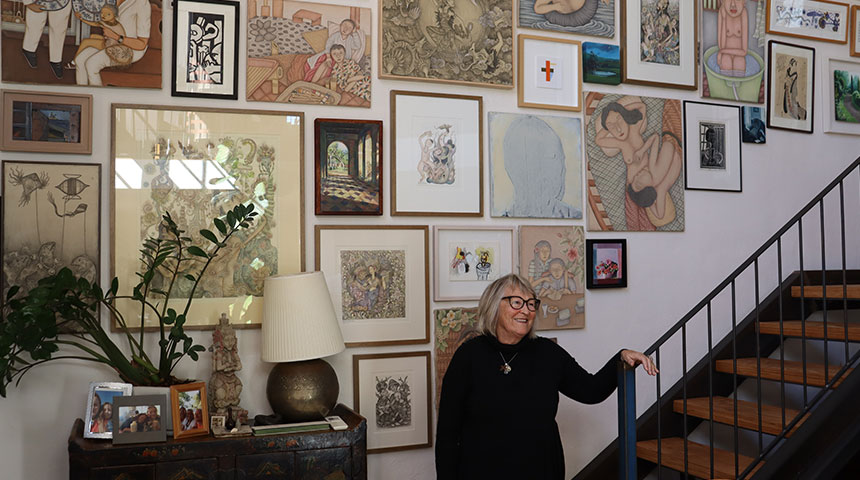 The colourful life of Mary Hill

Growing up the youngest of four daughters in rural Yorkshire, Mary Hill could not have imagined the rich, art-immersed life she would ultimately share with her late husband Chris, in a city over 14,000 kilometres away. Heading off together in the 1960s, to a land where they knew no-one, the ten pound Pom couple became well connected and much-loved figures of the WA artistic community.

Mary’s global journey had its very first steps at the tender age of 16, with a year spent in Germany. She had completed her school ‘A’ levels, but was still too young to be accepted into any university, so headed off to Germany where she soon becoming fluent in the language. A clear proficiency for languages saw Mary accepted into Bristol University upon her return, where she studied German, French and Old English.

Mary’s choice of university changed the course of her life, for not long after she met Chris Hill, who was working at Harvey’s, the local wine merchant business of ‘Harvey’s Bristol Cream’ fame. They were an unlikely couple, coming from vastly different backgrounds.

“Back then I was a bit of a beatnik. I wore a bowler hat, smoked a pipe, and hung around with all the male students. This was around the time The Beatles first emerged in 1962. The first time Chris picked me up to meet his family, I had a charcoal roll-neck sweater dress on, and Chris politely suggested I maybe get changed ha-ha. I had no idea about his family background, or the huge country estate he was taking me to!” said Mary. 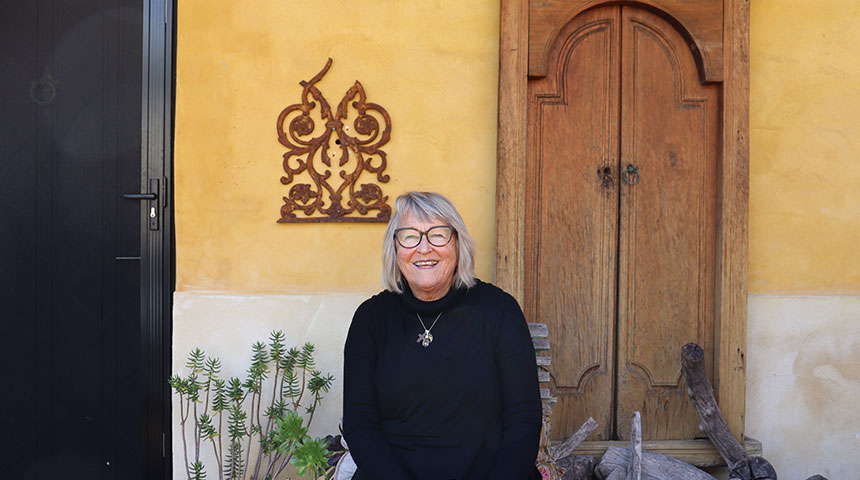 Despite the contrasting upbringings, the two of them hit it off immediately and decided to make a fresh start together. They got married and headed to Australia, first settling in Claremont in 1968. Mary got a job immediately, teaching languages at the South Fremantle High School and Churchlands SHS, but had to leave when she became pregnant.

“I tried to get back into the education system when my son John was around 1, but they said no, we won’t employ you. You are a married woman with children. That’s how it was in those days. I was ultimately accepted by the Methodist Ladies College (although private education went against all my ideals) because the Principal was very open minded, but even then, he telephoned Chris to check if he could cope ok with the kids!”

Shortly after, the world of art entered their lives. It started when Chris began visiting Galerie Dusseldorf during his lunch hour. He became interested in art and became good friends with the gallery’s owners, Douglas and Magda Sheerer. The couple had opened WA’s longest established private art gallery in 1976, on St George’s Terrace.

This was when Chris and Mary first began collecting, acquiring their first contemporary works by paying in instalments. They began with abstract artists, WA artists such as Howard Taylor, acquired  Aboriginal work and Chris also began collecting Ian Hamilton Finlay, a Scottish artist, poet and writer.

The Murdoch connection first began when Chris joined as a staff member in the Library in the mid-1980s and during that period he also served as a volunteer on the University’s Art Acquisition’s Committee and was responsible for caring for the Art Collection before a curator was employed.

In the same period, Mary and Chris moved to Fremantle, into a house next door to the Sheerers. Vibrant social gatherings ensured they met all the leading figures of the WA art world of that period. They began taking trips to Bali, which was the catalyst for a new direction to the personal collection when they acquired works from the local artists such as Wayan Tohjiwa, Putu Sana, Mokoh and Ubud painter and healer Ketut Liyer (who gained international fame following the release of Eat, Pray, Love in 2006). They became great friends with many Balinese artists and Chris decided to further pursue their passion by researching Balinese village painters in a Masters at Murdoch under Associate Professor Carol Warren. This culminated in Chris producing a book, Survival and Change: Three generations of Balinese Painters, which was published in 2006.

Professor Warren was also instrumental in bringing Mary to study at Murdoch when, in the early 2000s, she undertook a postgraduate course in Asian studies (Indonesian). 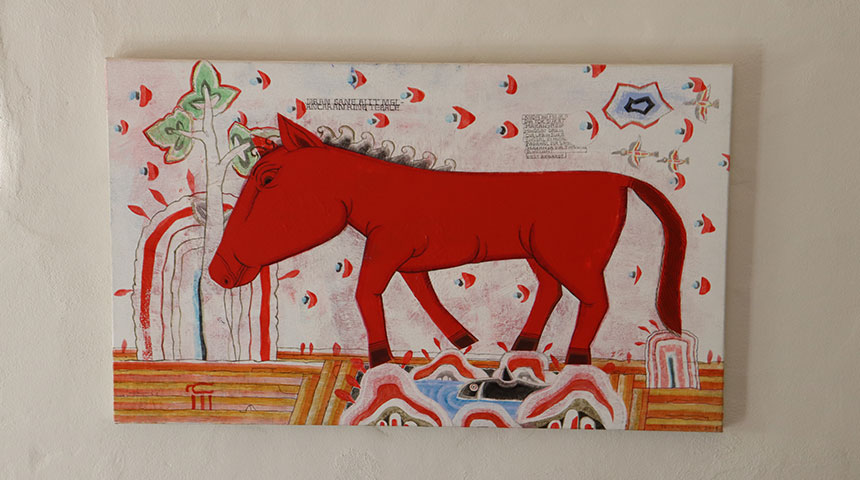 Following Chris’s sudden death in 2014, Mary continued their philanthropic work, including event sponsorship, donations, supporting artists and financial contributions to the Murdoch Art Collection for the acquisition of artworks.

The vision and generosity of Chris and Mary has been an invaluable boost to the scope of the Murdoch collection. It’s clear that over the last 17 years Mary has forged a very strong bond with the Murdoch Art Collection Curator, Mark Stewart. A relationship that began back when Mark was first interviewed by Chris for the curator position back in 2004.

Instinctively knowing which work would be perfect for the collection, she has often called Mark  when she feels it is time for a piece to leave her Fremantle residence and find a new home on campus. Mark, in turn, has worked closely with Mary as she attempts to catalogue the overwhelming amount of work Chris had accumulated over the years.

“Mark came to the house and helped me with a cabinet overflowing with work that I couldn’t face.  I simply could not have got it sorted without him,” she said. This close partnership just enabled Mary to make her very latest donation, 56 Ian Hamilton Finlay works that she has just gifted to the Art Gallery of Western Australia.

To honour Chris’s love for public art and their home city of Fremantle, Mary became involved in Fremantle Biennale, the biannual festival of contemporary art. She supported the visit of Felice Verini in 2017, the Swiss-born artist who transformed the city’s streets with his yellow geometric optical illusions. In 2019, she was a benefactor for the work of Dutch artist Daan Roosegaarde. In Daan’s Waterlicht, cascading waves of blue light soared throughout Esplanade Park, simulating a virtual flood and calling attention to the world’s climate crisis. While in WA, Daan was Murdoch University's inaugural International Creative Visitor and gave an enthralling lecture on his studio's global work at the South Street campus.  In 2021, she is the patron for AC4CA's contribution to the Biennale, continuing Chris's association with this group.

Aware of her extensive Balinese collection, Charles Darwin University approached Mary in late 2014 and she was able to gift many artworks for Taksu – their special celebration of the art of Bali, which took place in 2019. Her support of Balinese artists included sponsoring artist Wayan Upadana and allowing him to share her Chalmers Street residence in Fremantle and use a section as his studio.

Mary purchased Wayan’s work, The Desire of Gravity, which featured in Cottesloe’s Sculpture By The Sea in 2018, and ultimately donated it to All Saints' College to ensure many hundreds more could enjoy it in the years ahead.

This gift is arguably the perfect illustration of her passion and commitment to ensure art touches as many people’s lives as possible.

Her children, Joanna in London and John in Fremantle, also have homes full of art!

“Art collecting is fun, but I believe it should be in the public domain and think art is for everybody to enjoy. Yes, you can have your own personal collection at home, but I feel it is important to share the joy with as many people as possible,” said Mary.

It is this shared sentiment which has deepened her long relationship with Murdoch. Mirroring Mary’s view, Murdoch’s ethos is to integrate its collection throughout the campus and continue to have satellite art spaces woven throughout the landscape, both man-made and natural. As you traverse the campus, artwork is integral to the environment and gets intertwined into everyday lives.

Pressed for details of her next goal, or next chapter of a full and inspiring life, Mary remains open to any possibility.

“Frankly, I am very open to what happens next. Maybe I will finally find some time to write, that’s something I haven’t done enough of, but hey, I am just enjoying Fremantle and enjoying just being alive.” 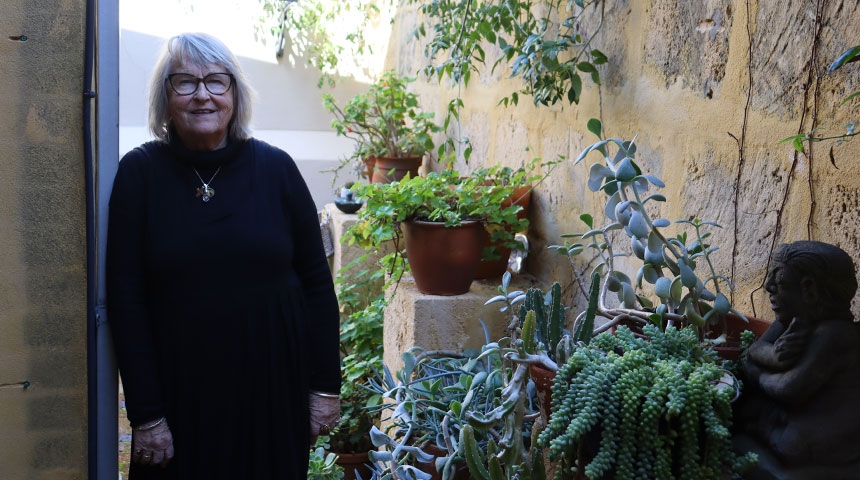