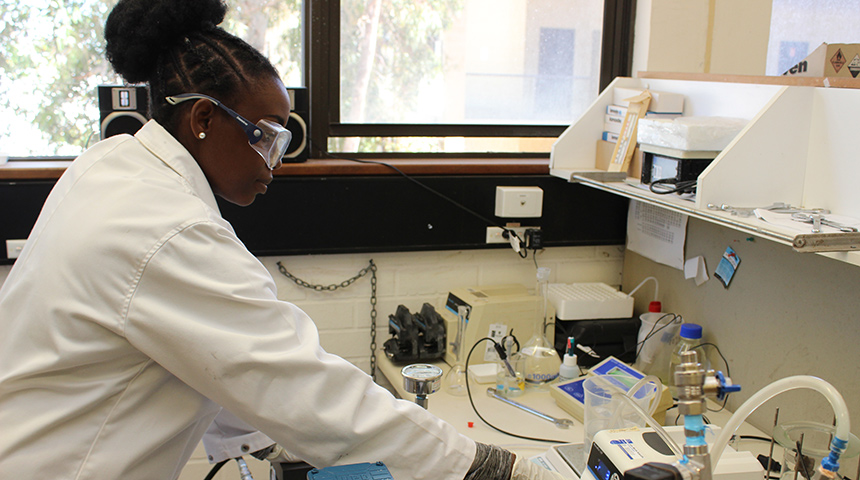 Leaving her family behind in Zimbabwe was just one of the challenges Ivonne Tshuma faced in moving to Murdoch. But her big move is paying off – in the lab and outside of it.

The concept sounds amazing. Considered in isolation it might even seem far-fetched. But then the story of one of the researchers behind it is rather remarkable as well.

In 2016, Ivonne Tshuma was a teaching assistant at a Zimbabwean university, with dreams of studying abroad and a hope to put her chemical engineering knowledge to real-world use.

By the end of 2019 she'll graduate with a PhD from Murdoch University, having developed a commercially applicable version of the self-desalination technique and forged a settled life in Perth for her family, including the daughter she initially had to leave in Zimbabwe as an infant and her son.

Her daughter was only nine months old when Ivonne left to take up the study offer she'd applied for at Murdoch.

"Oh my God that was tough. At the same time I was a little bit prepared for it because when you make these applications it doesn't happen in a split second.

"I think I had the interview with Murdoch University professors when she was only two weeks old. I went through all these application processes when I was pregnant, so I had prepared myself mentally to say that this was for the best.

Adapting to Australian life wasn't always simple. English is widely spoken in Zimbabwe but not always in the same way due to colloquial language and unique expressions.

"People would say, 'How are you going?' and I'd say, 'I'm going by foot or by bus' or whatever it was," Ivonne recalled.

More daunting were some of the cultural differences. Accustomed to busy Zimbabwean streets where you might buy your fruit and vegetables on the roadside and seamlessly strike up conversations with strangers, Ivonne instead found Perth less engaged, with commuters at bus stops seeming more inclined to bury their faces in smartphones than engage in a chat.

To begin with, Ivonne said it made her sad. But over time the culture shock of Perth dwindled.

She had ready access to basic tenets of life, namely food and shelter and personal safety, that were less-than-guaranteed to a great many in Zimbabwe (where poverty in some regions topped 90 per cent, according to UNICEF data).

When she would ask people for directions, she invariably found they would smile and help her out. She also soon realised she was far from alone.

"One of the PhD researchers used to organise trips over a weekend. He'd say, 'Today we are going for a bushwalk to this area,' so I would just jump in and go.

Ivonne has since been joined in Perth by her family, her husband (now also studying at Murdoch) and his son.

In January of 2017, she became a permanent resident of Australia and is now working on a project that she hopes will eventually help address drinking water issues in communities around the world.

Put in layman's terms, the research Ivonne is undertaking, built around a concept developed by Dr Ralf Cord-Ruwisch and Professor Liang Cheng, removes the need for electricity in the desalinisation process, instead relying on pressure generated by highly-concentrated salt brine to push brackish or seawater through a membrane.

The end result is fresh water and the potential, in a drought-prone Australia surrounded by oceans and with an abundance of remote salt lakes, is obvious. Already, half of Perth's drinking water is being supplied by traditional desalination plants located in the south of the city.

Last year, officials from Cape Town visited Murdoch and saw a demonstration of the technology as their "Day Zero" approached, while the brackish Caspian Sea (in reality the world's biggest Salt Lake) could become a drinking water source via the process.

There are also environmental benefits through recycling of brine and reduction of carbon emissions.

"My target is not big plants because everyone has to start small then grow. So, my target is to have something that can help a small family then later on upgrade to a larger scale.

"The purpose of doing research is to have a positive impact on the community.  This kind of work is something that we just can't keep to ourselves, we need to explore and see how beneficial it might be.

"Because of climate change we can't just rely on rainfall, we need to find other ways of generating water.

"These days there is big push to go greener and my process also reduces carbon emissions. When you use electricity some of it comes from coal, but I'm just using water."

Making the most of university support

Having originally worked with Wendell Ela in Zimbabwe, Ivonne has linked back up with the water quality management expert in his role as Professor of Desalination and Water Treatment at Murdoch.

The familiar face was welcome but only a small part of the staff support system she says helped her settle in.

The admin and supervisors are very involved in the student's life and assist with whatever struggles you are going through.

"Despite the challenges it's worth it... you'll learn a lot of things here. You'll also have that strength of having changed from one culture to another.

"That gives you an upper hand wherever you go, people will be keen to hire you because it demonstrates someone who is able to take a risk and adapt to change.

"The benefit of coming to live in Australia is that your mindset changes and the challenges you meet mould you to become a better person.

"Wherever you are in your country, it's a comfortable place to be. The moment you leave your comfort zone it creates this challenge and by the time you finish you have achieved something and overcome circumstances. It makes you who you are."

Ready to step outside your comfort zone and explore new ways of thinking? Explore our courses to get started.
Series: