What's happening in Perth this September 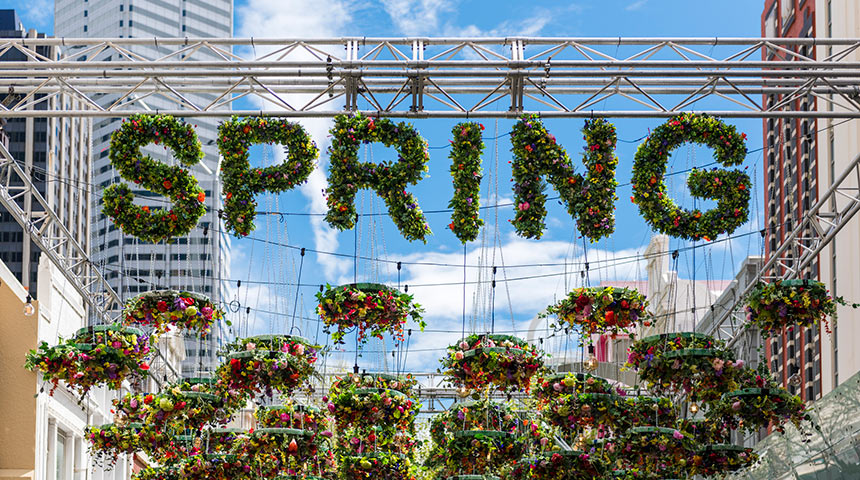 The weather is finally warming up and there's plenty to see and do in Perth to celebrate! Take a break from study and get out and about at one of the many events on in Perth this September.

Join in Western Australia's largest wildflower display at the spectacular Kings Park and Botanic Garden. The month-long festival program features an extravaganza of events and activities for lovers of wildflowers, gardens, conservation, art, local culture and the beautiful natural landscapes of WA. Learn more about the festival.

Called the best musical of this century by The New York Times, Book of Mormon follows the misadventures of a mismatched pair of missionaries, sent on a mission to a place far from their hometown of Salt Lake City. With sold out productions in London, on Broadway, North America, Melbourne and Sydney, The Book of Mormon is finally coming to Perth. Get tickets.

Now in its 21st year, Perth Fashion Festival is one of Australia’s premier fashion events and has cultivated an international reputation for fostering some of Australia’s most sought after creative talent. See some of WA's most exciting creatives in the flesh and get your tickets now.

To celebrate the release of their record-breaking 6th number one album The Great Expanse, Hilltop Hoods are back with 'The Great Expanse World Tour'. Their first headline tour since 2016, the Hilltop Hoods will be joined by special guests Mojo Juju, Shadow and DJ Nino Brown. Don't miss out on seeing one of Australia’s most loved live acts. Get tickets.

Ten years since forming in Perth and releasing their first few indie albums, Birds of Tokyo have become a household name, enjoying 16 APRA Award nominations, more than any other band in history, and making the triple j Hottest 100 11 times. Their Good Lord Tour is proudly presented by Channel [V] and is your chance to see this iconic band live. Buy tickets.

September 14 | Spring in the City at Yagan Square

Perth Makers Market is bringing their array of talented stallholders to Yagan Square for a spring event so that you can shop local year-round! Pick up a beautiful gift for a friend, or a mid-semester treat for yourself! More info.

Perth’s original and biggest quarterly market handcrafted wares, Perth Upmarket, brings together over 180 of Perth’s most talented artists, designers, craftsmen and gourmets all under one roof at The University of Western Australia’s Winthrop Hall. Parking and entry are free with three ATMs onsite. More info.

Perth-raised Troye Sivan is returning home to tour his sophomore album, Bloom, featuring the US Top 100 and ARIA double-platinum smash hit My My My! Coming off the back of co-headlining and co-hosting the inaugural Go West Fest in Los Angeles with Charli XCX to celebrate Pride week, Troye is expected to bring his A game. Get tickets.

Sound On Festival is Perth’s only festival for high schoolers! With some of the hottest live performances in Australian music including Peking Duk (DJ set), Ruel, G-Flip, Stevan, and FlexMami, plus heaps of free experiences including a glitter bar, gaming zone and photo booth, there's plenty of fun packed in. Tickets are sold out but you can subscribe for updates here.

A 35km challenge from South Perth to Cottesloe Beach, The Bloody Long Walk aims to raise funds for the Mito Foundation. A debilitating and potentially fatal genetic disorder that impairs the body's ability to convert food into the energy, one Australian child born each week suffers a severe or life-threatening form of Mitochondrial disease (Mito). Join in on Sunday September 22 and walk, jog or run to raise vital funds to help find a cure. Sign up now.

English pop mavericks The 1975 return to Australia for the first time since 2016. This is your chance to see a band at the absolute peak of their powers, as they show off new material from their wildly popular and critically adored second record I Like It When You Sleep, for You Are So Beautiful yet So Unaware of It. Buy tickets now.

The Perth Royal Show is Perth's biggest community event, attracting 350,000 every year. There's plenty to see and do including cuddling animals at the Animal Nursery, sampling delicious local food, sideshow fun, rides and of course, showbags. More info and tickets.

Listen Out is Australia’s premier dance music event, bringing quality dance music to four spectacular inner-city venues across Australia this spring. Taking place at HBF Arena, Listen Out is host to some of the hottest artists right now, including Flume, Cosmo's Midnight, Diplo and Young Franco. Get tickets.