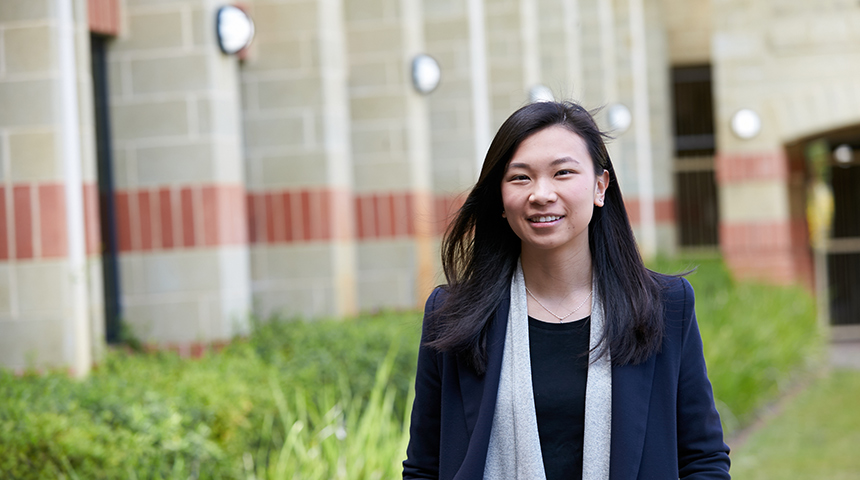 Originally from Indonesia, international student Andra Julinar found home in the beautiful city of Perth and in the multicultural family of Murdoch.

Finding the right fit at Murdoch

A self-described people person since a young age, it was a natural choice for Andra Julinar to pursue a Master of Human Resources Management.

"I always enjoyed playing team sports growing up, especially basketball as well as tennis and badminton.

"I chose Human Resources because it is quite related to my previous degree and who I am and what I love."

After careful research and taking word of mouth recommendations into account, Andra ended up choosing Murdoch as her preferred university, and hasn't been disappointed.

"I have several friends who studied at Murdoch and I received good feedback from them. I love the trees and nature side of Murdoch. I love just sitting down under the sun.

"I have really enjoyed meeting classmates from different professions and levels of experience. I love hearing their comments and arguments in class because it helps me to broaden my understanding."

Initially struggling to settle into her new environment, Andra greatly benefited from Murdoch's support services, and encourages future students who may be having issues to do the same.

"I had a great experience with a team member from Student Support during my struggles at university. I think it is a very important point to raise because often people are often afraid to ask for help, especially if they come from an Asian background as it can be perceived as being incompetent and shameful.

"I'm lucky that Murdoch really encourages students to ask for help if they are struggling."

The capital of Western Australia, Perth is a prosperous and thriving city based on the shores of the Swan River. Making the most of the warm, dry summers and cool, wet winters, Perth residents have everything they need with a large shopping district offering a cosmopolitan mix of cafes, restaurants, pubs and thriving nightlife.

While not as populous as our east coast rivals, our low cost of living (Perth is the most affordable capital city in the country in which to live and study according to The Economist Intelligence Unit, Worldwide Cost of Living Survey 2019), chilled out vibe, and beautiful coastline (we're home to Cottesloe Beach - rated Australia's best beach), made us the ideal study city for Andra.

"I love that Perth is less crowded than both Melbourne and Sydney. I also love the beaches and the clear water."

With a beautiful Mediterranean climate (average summer high of 31°C and average winter high of 18°C) and more daylight hours a year than even the Sunshine Coast, Perth also gives students like Andra the opportunity to make the most of their study experience.

"My favourite thing about Perth is the accessibility, convenience and freedom.

"I love being able to just go to a park and have BBQ in a very good weather because it's impossible to have that in Indonesia."

Making friends from all over the world

A welcoming multicultural community, Perth is ranked in the top 30 in the world for best student mix (QS, Best Student Cities 2019), and choosing Murdoch allowed Andra to take full advantage of this diversity.

"Murdoch has given me the amazing opportunity to mingle with people from different cultures.  While other universities have a high number of students who often they mix with their own race, Murdoch gave me the opportunity to socialise and not be boxed in with other Indonesians.

"I think this is really important for all students, especially international students. Mingling with the ‘same kind’ of people won’t benefit us and won’t teach us anything, but by exposing ourselves to different people and cultures we can broaden our view and understanding of the world.

"That’s why I love Perth so much and feel like it is my home."

Learn more about joining Andra and thousands of other students who have come to call Perth and Murdoch home.