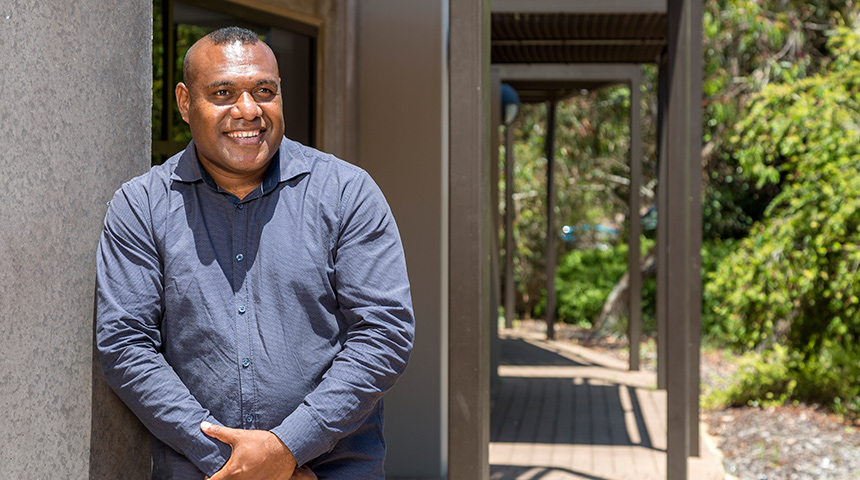 Since coming to Murdoch University on an Australia Awards Scholarship in 2017, Papua New Guinean Benson has excelled in his studies and used his knowledge to improve life back home.

Proud Papua New Guinean and father of four, Benson Hahambu made the move to Perth in 2016 to progress his career.

"I was working in the development sector in PNG before resigning to take up the Australia Awards Scholarship.

"I attended the Australia Education Road Show where I met a Murdoch professor who guided me through my choices, which led me to putting Murdoch as my first preference in the Australia Awards Scholarship application process."

With an aim to contribute to the development needs of Australia's partner countries in line with bilateral and regional agreements, The Australia Awards Scholarship provides opportunities for students from developing countries, like Benson, to undertake full time undergraduate or postgraduate study at participating Australian universities and TAFE institutions.

Once they've completed their studies, students return to their own countries to drive change and contribute to development.

After carefully considering his options at Murdoch, Benson eventually settled on a Master of Development Studies.

"After looking closely at the various units offered in the program, both core and electives, as well as studying the profiles of the course unit coordinators, I was convinced that the course was for me.

"In particular, I was impressed by the flexibility in choosing electives that contribute to professional growth and development post studies."

Making the move to Perth

A daunting prospect for anyone, the move overseas was smooth sailing for Benson due to the support of Murdoch University and the welcoming atmosphere of Perth.

"The International Student Services team at Murdoch was very supportive and the orientation program really assisted. There was also continuous academic and social support offered throughout my two years of studies.

"I love that Perth isn't as busy and more friendly than other Australian cities. The loving atmosphere is everywhere."

At Murdoch, Benson excelled in his studies, making the most of every opportunity, including interning at WA Parliament House and being the recipient of the prestigious Student Partnership for Impact Award.

Benson and his Australian study partner, Stephanie Matulin, teamed-up to develop the project called Papua New Guinea Education Network for Disaster Risk Reduction. One of only five pairs from across Australia to be short-listed for consideration at the 2017 Research for Development Impact Network Conference, Benson and Stephanie received a $10,000 grant to help implement their idea in rural regions of Papua New Guinea.

The pair impressed the judging panel with a plan to address how little knowledge people living in rural Papua New Guinea had of disaster risk reduction strategies. They aimed to do this by targeting teaching networks for specialised training.

Since graduating in 2018, Benson's career has gone from strength to strength, and is currently Deputy Directory of Callan Services National Unit (CSNU), a national coordinating and capacity building agency.

Made up of 21 institutions, Callan Services work in collaboration with churches, non-government organisation and development partners to strengthen the work of inclusive education and community-based rehabilitation services in Papua New Guinea.

Benson credits Murdoch University for giving him the foundation for his success.

"The university and career advisors assisted me a lot in shaping my career pathway. I would recommend Murdoch to other international students because of the friendly academic environment and assistance offered by both academic and ancillary staff members."

Are you ready to follow in Benson's footsteps and join a global community of independent thinkers who are working towards building a better, more sustainable future?

Find out more about becoming an international student at Murdoch.