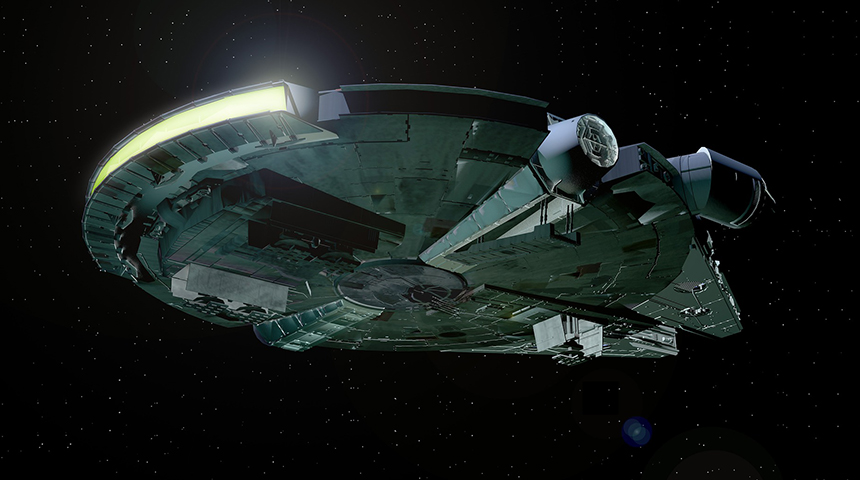 Star Wars may be fiction, but we can dream, right?

We got thinking how cool it would be if the tech used in Star Wars actually existed, and here’s our wish list:

Why not start with the most iconic piece of tech in Star Wars? Nothing looks better than a lightsaber twirling around in battle. But apart from having a bit of great kit strapped to your waist, imagine the possibilities if lightsaber crystal technology could be developed. It would revolutionise everyday applications in engineering, medicine and manufacturing.

We could all do with droid assistance in our lives, whether it’s transporting secret holographic messages, performing medical tasks, or translating Bocce. If this technology could be mastered to match the capabilities in Star Wars, a droid could assist us with sophisticated requirements, store and process complex information, reduce human labour costs, and perform tasks considered dangerous for humans.

Imagine where you could go on a weekend with this type of technology! Jumping between solar systems at lightspeed would be amazing, although we’re not too keen on what that level of jet lag would look like. Hyperdrive travel would dramatically change where we could go and what we could discover in an instant.

Bruised and battered from battle? No worries! Just get yourself in a bacta tank. A full submersion in one of these bad boys allows your skin, muscles and nerves to repair fully so you can live to fight another day. It remains strictly sci-fi for now, but if this regenerative tech could be developed it would revolutionise the medical world.

Ever wondered why Boba Fett is the most badass character of the franchise? It’s because of all his cool tech! Fett’s wrist mounted MM9 rocket launcher is unreal, offering stun grenades or regular wrist propelled explosions at the touch of a button – definitely the weapon of choice for any serious bounty hunter (anyone trying to kill him in Battlefront will agree).

While we probably have the technology to develop Blasters in real life, the problems involving possibly burning or ripping an arm off makes us happy to leave this one in sci-fi land with Boba.

TIE (Twin Ion Engine) fighters have two solar panels which provide not only large scale propulsive energy, but also power up the TIE’s laser cannons. This same concept is used on NASA’s Juno Space Craft craft (minus the cannons). Who would have thought the Dark Side would use renewable energy for evil?

I know what you’re thinking, “Surely the deflector shield can’t be real?” Well, you may be amazed to learn that in 2015, Boeing built plasma-based force fields in order to stop vehicles being harmed by explosions. When Boeing’s force field detects an explosion it quickly heats up the air or water in between the vehicle and the blast to create a plasma shield. It can be used on land or in water to lessen the damage to boats or subs.

How good is Luke Skywalker’s Landspeeder, not to mention the hover bikes in Return of the Jedi? As it turns out levitation by these methods does exist! The Maglev Train in Japan floats above the tracks using two sets of magnets, one to push the train up and the other to move it along. There’s also the Malloy Hoverbike which claims to use turbofans to lift it 10,000 ft (304m) in the air and reach 173mph (278kmh) in horizontal speed!

‘Help me, Obi-Wan Kenobi. You’re my only hope!’ Remember Princess Leia beaming out of R2-D2 in Star Wars to tell Ben Kenobi the rebellion was in trouble? This was holographic technology and although we’re not quite at this level yet, it’s closer than ever before. Smart Phones are now being created with 3D holographic technology, with the first one recently launched. Imagine Princess Leia beaming out of your phone!

Did we mention Boba Fett had the best tech? His fast and nimble Z6 jetpack not only gave him an edge when tracking targets, it could maintain sustained flight and provide short bursts of lift during combat. While a jet turbine powered backpack capable of vertical take-off and landing has been developed, it doesn’t look as cool as Boba’s or stay in the air for a sustained period… yet.

Interested in creating tech to make a difference to the economic and social well-being of our society? Why not study a Technology or Engineering degree and make revolutionary ideas happen.
Series: