Will travelling at warp speed ever be possible? 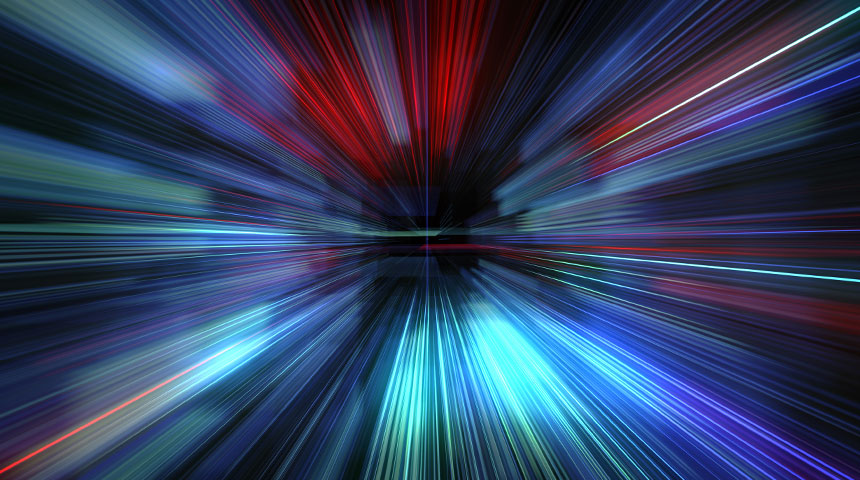 Spaceships travelling faster than the speed of light has been the domain of science fiction writers, but could we actually make it more than scientific possibility?

We have an issue with the cosmic speed limit, otherwise known as the speed of light - nothing can travel faster than it. Plus, even if we could travel at the speed of light, it would still take us years to get to the closest star.

Science fiction writers have solved this dilemma by inventing the warp drive, a gadget that magically propels ships across the vast expanses of the solar system faster than the speed of light. It’s just as well, because at the current speed of our fastest rockets it would take Captain Kirk 100,000 years to boldly reach the next star system!

Travelling faster than the speed of light continues to capture the imagination of many scientists, who believe bending the laws of physics may allow us to break the universal speed limit. Several theories have been proposed, including the Alcubierre warp drive theory. Instead of trying to beat the speed of light, which is physically impossible, the Alcubierre warp drive would go around it by warping space-time itself, Star Trek style!

According to the theory, the travelling spaceship would sit within a warp bubble surrounded by a ring of negative mass. This would enable you to shrink space-time in front of the spaceship and stretch space-time behind it, enabling it to travel through space at ten times the speed of light.   While inside the bubble, the craft would remain within the universal speed limit and general relativity would remain intact.

There is only one small issue - it would need enormous mass energy to make the warp drive work.  To propel the spaceship at this speed you would need the mass equivalent of Jupiter, the planet! If you take Einstein’s equation, E=mc2, that is a ridiculous amount of energy, more than any source found in the universe could ever provide.

Solving this negative energy requirement is something that Dr Harold Sonny White, a NASA mechanical engineer and physicist, is researching. He believes by finding loopholes in the physics, the mass energy requirement of the Alcubierre theory can be brought way down. He even suggested we might be able to change the shape of the ring of negative mass to achieve a mass requirement to about 700kg. That’s more like it!

White led a team of engineers and physicists at NASA to build what is known as the White-Juday Warp Field Interferometer. It’s a beam splitting interferometer, which detects and even generates a tiny warp bubble. This creates a microscopic instance of the phenomena that would be required to get us somewhere unthinkably fast, without the adverse effects. Inside the bubble, there would be no tidal forces so you wouldn’t feel any acceleration. It won’t get us over to the Andromeda Galaxy in the near future, but its baby steps in the right direction.

So, when are going to start warping around the galaxy? Unfortunately, not in the next few years - extensive future research is still required as there are still many issues to solve. The first problem is we don’t actually know if negative mass exists in the universe. There’s evidence that it does, but it’s never been directly observed.  Secondly, although the energy mass requirement would now be much lower than Jupiter, it’s still incredibly high. 700kg of mass energy represents way more energy than even the most powerful atomic bomb detonation.

Though significant, these problems are not necessarily impossible to overcome and some scientists even think this technology will be a reality within the next 100 years. If they’re correct, this technology would absolutely revolutionise the human species, as we know it. Imagine travelling the universe at ten times the speed of light. We'd become an interstellar species boldly going far beyond anywhere humans have been before.

Does the possibility of studying such life-changing technology thrill you? You never know where in the universe your problem-solving and analytical skills might take you if you decide to think beyond the obvious.

Thinking of a degree in technology? Visit our technology course page. Discover our study options for international students.
Series: