With the help of citizen scientists, 61 baby southwestern snake-necked turtles were released into Bibra Lake as part of an important incubation project by Murdoch University researchers aiming to bump up waning numbers.

Harry Butler Institute scientists, City of Cockburn representatives and more than 15 turtle-trackers joined forces to release the baby turtles into the wild after being given the all-clear by lead researcher and Honours student April Sturm.

The southwestern snake-necked turtle (Chelodina oblonga) lives across the Perth metropolitan and the south-west regions, but population numbers appear to be in decline due to threats including roads, ravens, and foxes. 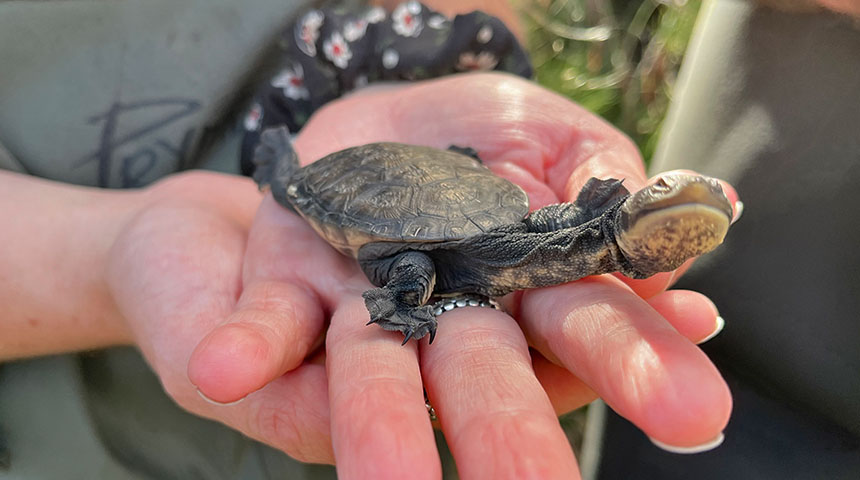 Turtle ecologist Anthony Santoro who has studied the species for over six years found that most populations are missing juveniles and becoming male-biased.

He warns the species is in danger of going extinct unless action is taken to protect them.

“If this isn’t rectified, populations will continue to decline as older turtles die and aren’t replaced by juveniles – likely resulting in populations becoming locally extinct.”

To give the populations a helping hand, University researchers established a new egg incubation program in conjunction with the City of Cockburn that involved 120 turtle eggs.

The program investigated how to maximise the hatchling success of incubation in an artificial environment by simulating natural conditions, including temperature and humidity levels.

Over the course of five months Ms Sturm welcomed 61 hatchlings, between 2-3 cm in length, and weighing 3-6 grams.

After eight months of being nurtured and cared-for by Ms Sturm and fellow Honours student Liz Whatmore, the hatchlings were ready to be released into the wild. 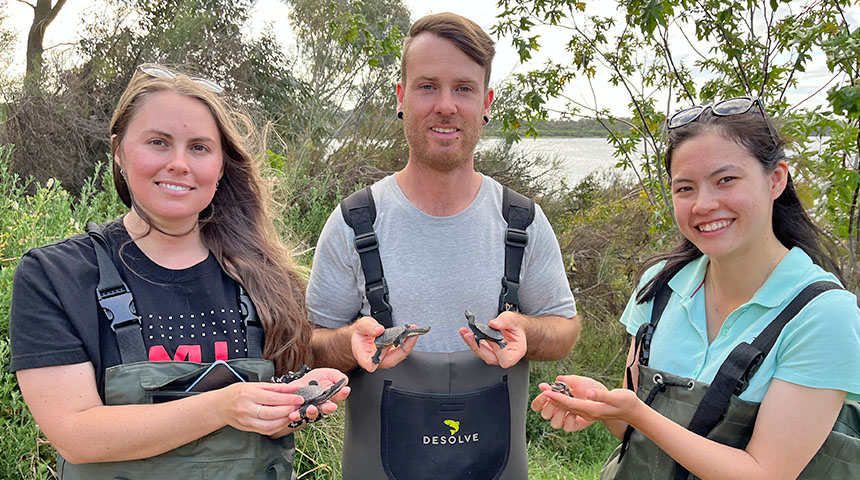 Ms Sturm said the release of the healthy turtles was a tremendous step forward in the conversation of this species and it was a great privilege to watch the hatchlings get stronger each day as they embarked on their journey towards release.

I’ve been with them from the first day, so releasing them into the wild was an incredibly emotional and rewarding experience. But this is what the conservation program has been designed for – to hopefully see an increase in juvenile numbers."

The next phase of the project is being led by Ms Whatmore and involves tracking the hatchlings using radio-telemetry to understand their movement and habitat use behaviours, as well as post-release mortality.

“We attached a tiny VHF radio tracking device onto each hatchling’s shell using a flexible aquarium sealant which allows the shell to grow unaffected,” she said.

Over time, the trackers will fall off as the hatchling sheds its scutes as the shell grows. Each tracker weighed just 0.5g to ensure they did not affect their movements.”

Although Ms Sturm had no favourites, she was especially fond of ‘Gerald’ the turtle – the first Murdoch University turtle to hatch, and who was the focus of a community-wide naming competition earlier this year. 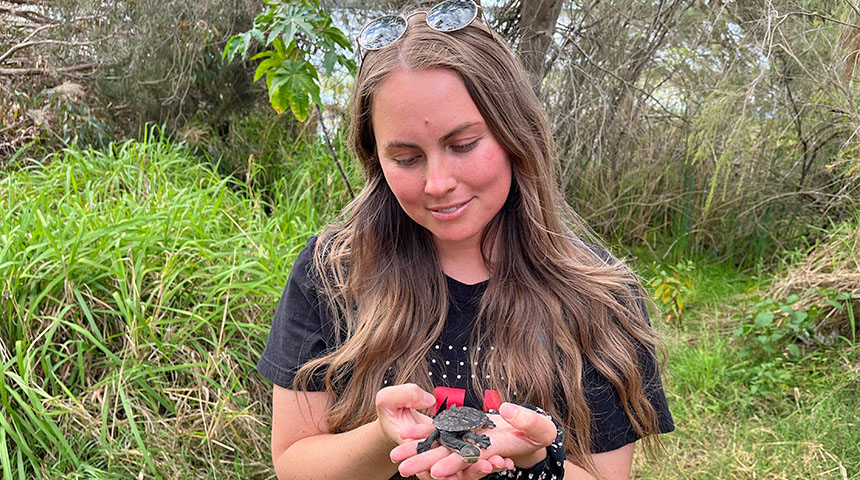 “It was tough saying bye to Gerald, but it was a special moment being there as he took his first look around his new home,” she said.

As I let him go, it was a reminder that he’s part of a significant project that may help a population severely depleted of juveniles.”

Conditions at Bibra Lake were monitored to ensure a suitable environment before the release date.

Turtles were released into a sheltered position at Bibra lake, safe from birds, and surrounded by plenty to eat including macroinvertebrates, tadpoles and fish.

The information being gathered on the movement patterns of the hatchlings will help to guide the protection and restoration of habitats favoured by hatchlings not only in Bibra Lake, but also other wetlands around Perth.

In another effort to conserve turtles, community volunteers are being trained by Murdoch University experts through South West Corridor Development Fund Inc’s Saving Our Snake-necked Turtle project. Funded by Lotterywest, along with contributions from numerous Local Government partners, citizen scientists are being trained to track nesting female turtles and protect their nests, as well as inputting data via the TurtleSAT App.

The program will help to develop specific management plans for the species in each of the partners wetland.

Find out how you can play a part in stopping the species from joining the endangered list here.

How we can fight the fires of climate change