Flatbacks turtles are a much-loved Australian species, but they are considered vulnerable and poorly understood.


A large part of the research is being performed using animal-attached biologging tags, built by Customised Animal Tracking Solutions (CATS) Australia, that feature the same technology found in Fitbits or smartphone activity monitors.

“The tag captures the turtle’s 3D body movements, such as flipper beats, and monitors underwater activity in great detail almost like an electronic diary. They also include a high-definition camera that lets us see life from the turtle’s point of view like never before.”

“This technology allows us to learn more about the behaviour and ecology of free-ranging wild animals – like flatback turtles – that would have previously been limited to studies on captive animals,” said Ms Hounslow.

Ms Hounslow explained we need to assess the anthropogenic threats, and the extent of them, faced by flatback turtles, such as marine debris, coastal industrial development, recreational vessel use and the effects of climate change, to help ensure they are not disturbed at critical foraging habitats.

“This is why we first need to understand their behaviour. However, as with any animal that spends most of its life underwater, it is difficult for us to observe their behaviour for extended periods without disturbing them or biasing our observations,” she said. 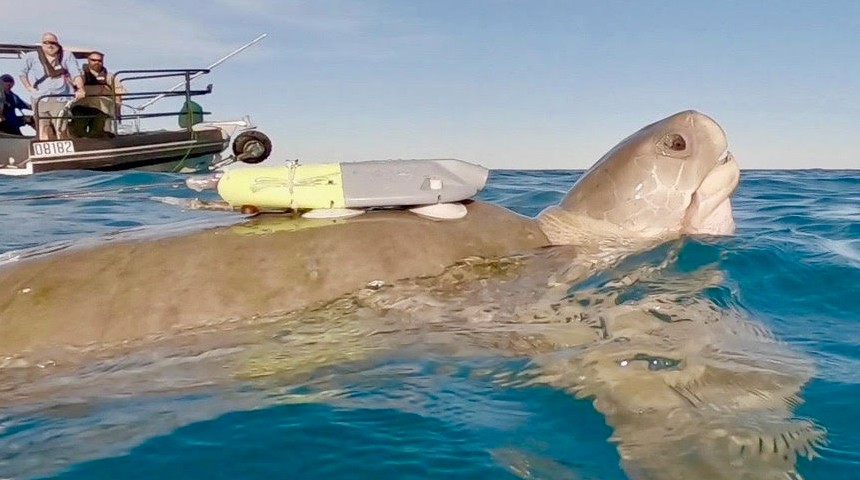 Ms Hounslow said most scientific research to date has been done on nesting female turtles and hatchlings, due to ease of access from nesting beaches.

“This represents only a tiny period of a turtle’s life. They spend most of their life at sea away from nesting beaches and only the adult females return to their nesting beaches every 2-3 years,” she said.

“The project is in its early stages but we have already tagged 29 flatback turtles at Roebuck Bay, both males and females. In 2018, in collaboration with the Department of Biodiversity, Conservation and Attractions (DBCA) and Yawuru country managers sharing traditional knowledge on Yawuru sea country, we caught the first adult male flatback turtle for scientific research. This male turtle weighed over 80 kg and was the first turtle tagged for my PhD research.

“We released the turtle where we caught him, and the tag popped off after a couple of days recording continuous activity and environmental data, giving us over 8 hours of video and a turtles-eye-view of underwater life in Roebuck Bay for the first time.


“We saw the turtle foraging on the bottom sediment on small invertebrates and foraging in the water column eating sea tomato jellyfish as well as resting, swimming and taking breaths at the surface.”

Ms Hounslow first gained experience using the biologging technology with other aquatic species, including sharks, through volunteer work throughout her undergraduate and honours degree at Murdoch’s Centre for Sustainable Aquatic Ecosystems.

Ms Hounslow’s research with the Harry Butler Institute is part of the North West Shelf Flatback Turtle Conservation Program (NWSFTCP), a much larger multi-year project administered by the DBCA aiming to conserve and protect flatback turtles in Western Australia.

“Each day we’re learning more about where and how much time flatbacks allocate to different behaviours, what the flatbacks are eating, as well as how they interact with other turtles and their habitat,” said Ms Hounslow.

“However, we still very much lack an understanding of what flatback turtles are doing at-sea, which is why we need to study all stages of an animal’s life history, so we can continue to design effective conservation and management tools to keep these beloved underwater creatures around.”

Learn more on research from the Harry Butler Institute.