How modern science and ancient knowledge are saving the sawfish

Researchers at the Harry Butler Institute are working with Indigenous rangers in the Northwest to identify ideal habitats of critically endangered freshwater sawfish in Western Australia’s Fitzroy River.

Freshwater sawfish are an iconic species of Australia’s north, which is home to nurseries of global importance. These incredible animals, with their long rostrums, grow to around seven metres in length and are amongst the largest living fish.

Although sawfish numbers appear to be healthy in some small pockets of northern Australia, they have seen drastic decline globally, ranking them amongst the most endangered fishes worldwide.

Researchers at the Harry Butler Institute are working with Indigenous rangers in the northwest to identify ideal habitats in Western Australia’s Fitzroy River in the hopes of saving this critically endangered species. 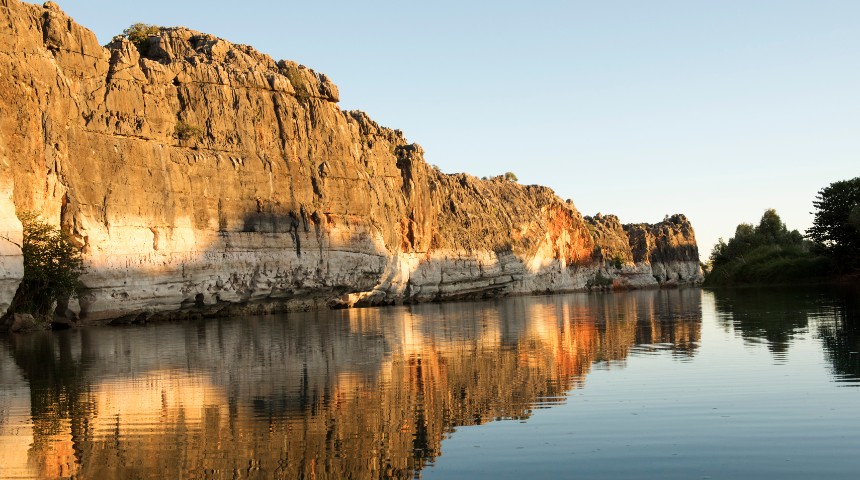 Dr David Morgan and Dr Adrian Gleiss have been identifying the environmental conditions that need to be considered in conservation and management decisions for the waterway.

“While deep pools and shallow environments of Western Australia’s Fitzroy River are important habitats for the freshwater sawfish, restriction of flow or altering of river pathways could jeopardise these environments,” said Dr Morgan.

The team have been tagging the endangered animals with electronic tags to understand what they’re doing, where they’re going, how much water they need and how that impacts their growth.


“We’re trying to understand how variations in conditions in the river – how big of a wet season we have, how much water is in the river at any time – impacts the ability of these fish to survive and grow to full maturity,” said Dr Gleiss.

“To provide an idea of just how important the Fitzroy River is to these guys, we can cast a single 15-metre net and catch 30 to 40 sawfish in some years. Whereas our colleagues in other parts of northern Australia would have to fish for days to catch one. So, for this species, it’s a globally important nursery.”

The research team continue to work closely with the Department of Water and Environmental Regulation (DWER), providing evidence to inform water planning policy.

The goal is to balance the agricultural and economic needs of the communities that draw water from the Fitzroy River with realistic water targets that are not going to be detrimental to the animals. Only at certain thresholds will DWER allow water to be taken from the river. 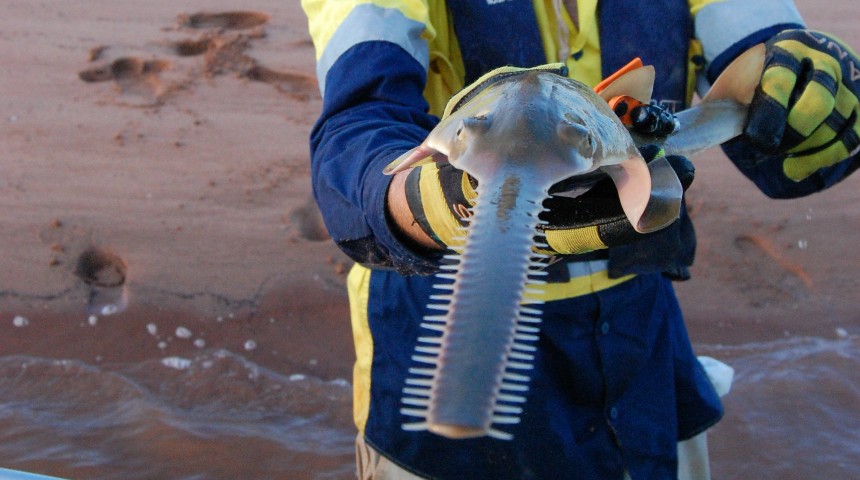 Preserving languages in the Northwest

Dr Morgan is not only conserving some of the world’s most endangered fish species, but his work has helped in preserving some of history’s oldest languages – working with traditional owners on country in Western Australia’s remote Northwest.

“I started working with the elders there on mapping and surveying the all of the fish species which inhabit this rugged and remote region ahead of a proposed damming of the river,” he said.

“We recorded all of the fish species in the area, over 100,000 square kilometres and the resulting findings have identified Western Australia as an area of global significance for four of the world’s five most endangered species of sawfish,” he said.

With the help of the elders, the Kimberley Land Council and Kimberley Language Resource Centre, Dr Morgan and his team developed maps of the fishes of the Fitzroy River along with their Aboriginal names.

“Some languages are in danger of disappearing altogether, so it was important to record them. The maps have since been distributed to primary schools and throughout the communities, raising awareness of these valuable links to culture and heritage,” he said.

“Although the work started over 20 years ago, we find people still have all the posters we produced. In the different languages. And, these long-standing partnerships and friendships have really helped to build many different projects throughout the last couple of decades.” 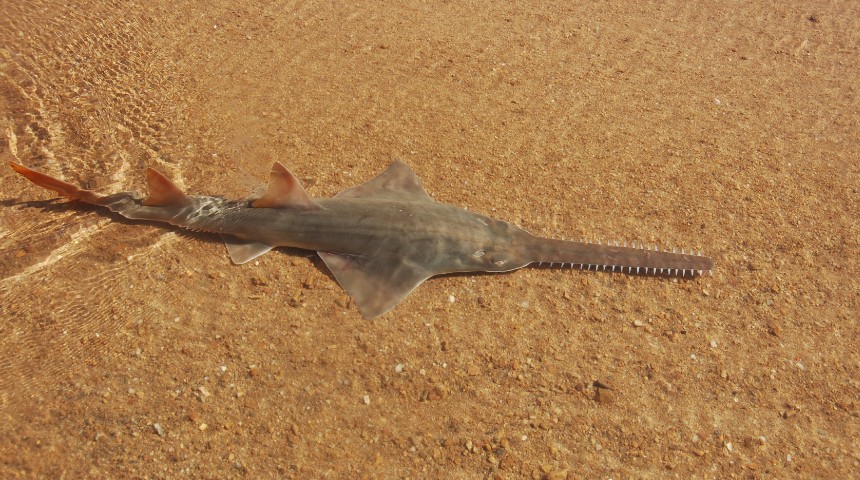 Why the work is far from over

While both Drs Morgan and Gleiss have spent significant time conducting research in WA’s northwest, the pair believe the work is far from complete.

“We’re talking about one of largest fish in the ocean, growing up to seven metres, that are fast disappearing. But they still use this river as a nursery and it’s on all of us to protect places like this,” said Dr Gleiss.

Dr Morgan added there is plenty of surveying work still to be done. The Kimberley is the last frontier, with poorly surveyed lands and rugged, impenetrable terrain.


With the help of our contacts in the communities up there, we hope to continue our work in bringing attention to this environmental jewel.”


We acknowledge the Traditional Owners of the land in which our research takes place, with thanks to collaborators Stephen Beatty, Karissa Lear, Jeff Whitty, Travis Fazeldean and the Nyikina-Mangala Rangers. Footage from the above video has been filmed on Nyikina-Mangala and Bunuba country.

Learn more about research at the Harry Butler Institute.