Western Australian scientists have been central to another leap in modern crop breeding technologies around the globe.

The Western Crop Genetics Alliance was a key contributor to the recent detailed DNA sequencing of world-wide barley genomes by an international consortium.

The research by the Alliance, a partnership between Murdoch University and the Department of Primary Industries and Regional Development (DPIRD), had additional co-investment from the Grains Research and Development Corporation (GRDC).

Mapping the barley ‘pan genome’ – the entire set of genes from a wide diversity of strains within the species – provides a blueprint to breed the next generation of high performance varieties.

The work builds on the Alliance’s contribution to the first mapping of the barley reference genome in 2017.

“Every barley variety is different and so is its genome,” Professor Li said.

“As a result of this new knowledge we have been able to determine that about one third of barley genes are highly variable, also that about five per cent of genes are unique to individual varieties.

“These variations are critical to understand and manipulate key performance traits, including yield, quality, disease resistance and adaptation to different environments, to assist plant breeders to develop new improved varieties.”

A notable discovery, was that about 15 per cent of all barley genes have a variation of DNA copy numbers, which have a major influence on the performance of individual varieties.

One of Australia’s most widely sown barley varieties, RGT Planet, was used in the research.

The scientists also uncovered that RGT Planet had the largest number of gene inversions – or genes arranged in different orientations – across all barley varieties, which could eventually be used to incorporate desirable traits in new varieties. 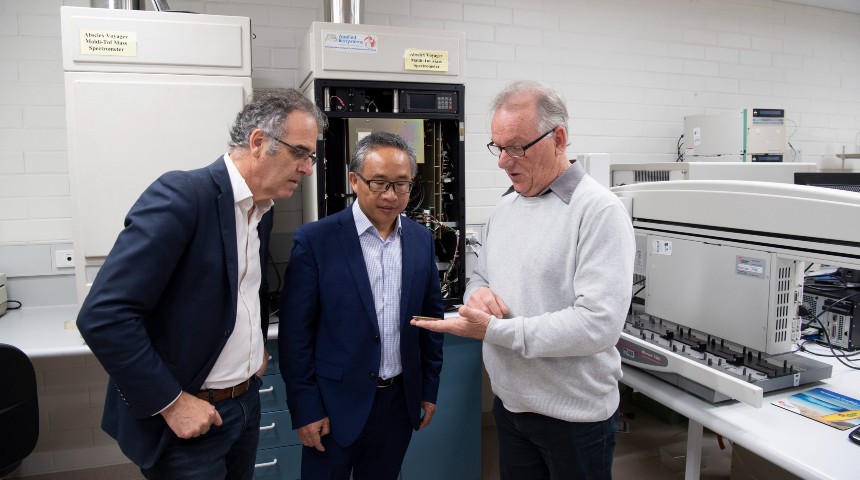 Professor Li used the example of a brick in a wall to illustrate how these variations in copy numbers and orientations could be used to target key traits for new varieties.

“Every brick – or gene – can look similar but different numbers of bricks put together will form a new structure,” he said.

During the research, the scientists also discovered this characteristic originated from a mutation from a European parent of this variety, which was created using gamma radiation in the 1960s.

“No one knew for half a century that this had happened. Now this inversion mutation has been identified, plant breeders can use it to breed new varieties or examine the use of gamma radiation to explore its influence on other functions,” Professor Li said.

To facilitate the use of the barley pan genome, the Alliance is developing computer software that makes the information more accessible to commercial plant breeding companies.

The DNA breeding tools developed by the Alliance from the barley pan genome have already been transferred to Australian commercial plant breeding companies, which have applied it to their breeding programs.

Professor Peter Davies, Pro Vice Chancellor for the Food Futures Institute, commended the Alliance for its continued contribution to science.

“This small team is punching above its weight, building on its achievements, like developing the doubled haploid CRISPR technology recently, to advance breeding technology and applications that boost sustainable food production.”

The International Barley Pan Genome Consortium is comprised of seven countries and included contributions from the Western Barley Genetics Alliance, the University of Adelaide and Agriculture Victoria.

Learn more about research from the Food Futures Institute.
Posted on:

Perth has distinct dolphin communities and they each need different protections

Unlocking the development of superior lupins