Dubbed the world’s ‘happiest animal’, there’s still a lot we don’t know about quokkas that is needed to secure the survival of the species. This is especially true for how we manage quokka habitat for mainland populations.

On the mainland, the quokka is restricted to a number of small, scattered populations in the Northern Jarrah Forest. These populations face threats, including reduction of habitat, decreasing rainfall, competition with feral species, and bushfires. These threats, along with low numbers of quokkas in fragmented populations, can be devastating.

In collaboration with the Department of Biodiversity, Conservation and Attractions (DBCA), researchers from Murdoch University’s Harry Butler Institute are conducting research to better understand quokkas’ use of habitat during prescribed burns (planned fire) and how a range of threats influence quokka recovery after prescribed burns are undertaken.

In the context of this research it is important to recognise that prescribed burns are an important management tool to protect and enhance quokka habitat.  They are needed to regenerate old vegetation and to reduce fuel, helping to minimise bushfire intensity.

Leticia Povh, PhD candidate at Murdoch University, is using tracking collars and motion sensing cameras to track the animals and study their response to prescribed burns to determine the impact of fire on their habitat and survival.

The research, funded via a compensation arrangement between Alcoa Australia and the DBCA through the Forest Enhancement Committee, will help develop effective conservation strategies to better manage mainland quokka populations and refine management practices.

“Studies have shown that mainland quokkas prefer mosaic habitats - those with different stages of vegetation growth providing food and refuge for them. But little is known about how they behave during and after prescribed burns,” she said.

We want to know how quokkas survive these prescribed burns and how the animals use the landscape after the burns are carried out.”

The research also focuses on the presence of potential predator (fox) and feral (pigs and cats) species, and their impact on quokkas. 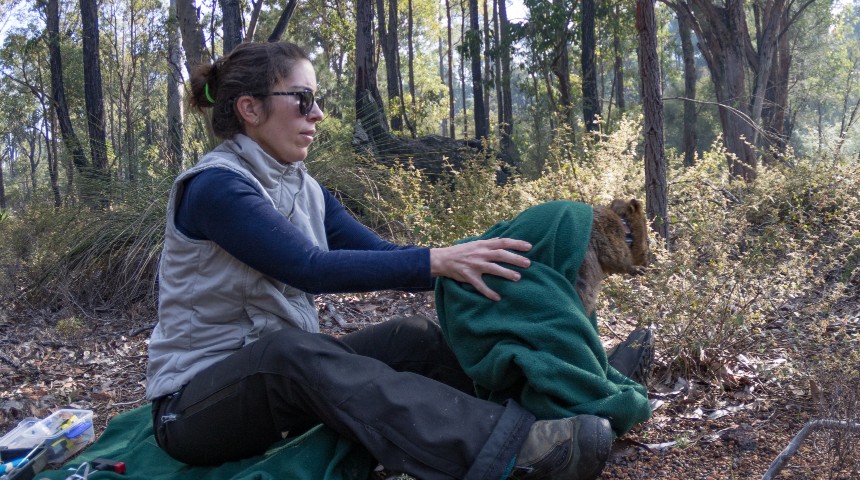 “The VHF collar emits a signal, so when I get close to a quokka, I can hear the beep pattern through my receiver connected to an antenna. Once I hear the ‘beep’ pattern, I have to find the stronger signal direction, and then manually estimate the animal’s location taking bearings with a compass.”

The GPS collars communicate with satellites to take the animal’s location at pre-determined times so there’s no need to estimate location in the field with a compass and the animal’s position is collected throughout the day.

“We are also testing whether quokkas may have to change their diet, and quantifying vegetation regrowth post-fire.”

Lab-based studies of quokka dung before and after prescribed burns will help to identify quokka diet. Plant material, including seeds, is separated and collected to compare against an archive of potential plant species that they could be eating.

It’s all part of the rich tapestry of research that will help develop a better understanding of the mainland quokka, and ultimately protect its fragile habitat that will enable them to persist into the future.

Learn more about research at the Harry Butler Institute
Posted on: