The next generation of forensic scientists

Dr Paola Magni has been recognised in the 2020 Women in Tech Western Australia awards for her work advancing investigations into crime-related deaths in water, while guiding the research of her Honours students.

Today, Dr Paola Magni is a shining example of female leadership and an advocate for women in STEMM.

Dr Magni now adds a 2020 Women in Tech Western Australia (WiTWA) award, including the special ‘First Among Equals’ trophy to her list of accolades this year – Young Tall Poppy, 40under40 and being selected to take part in the Homeward Bound project.

WiTWA brings together outstanding leaders and companies in tech and inspire action towards diversity and equality in the workplace.

Always an early adopter of technology, Dr Magni is well-known for incorporating cutting-edge tools to the field of forensic science to vastly improve the crime-busting abilities of investigators and law enforcement officers around the world.

She has developed a forensic entomology smartphone app to assist law enforcement agencies and pathologists at crime scenes, "SmartInsects", which has been downloaded more than 40,000 times.

“While we still imagine a forensic investigator holding a magnify lens, the reality is that technology can promote method standardisation, information exchange and educational development,” said Dr Magni. 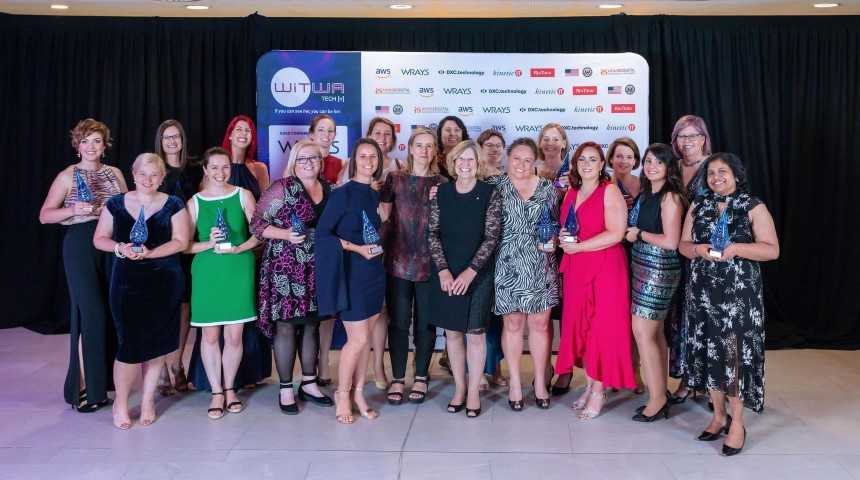 But for the award-winning forensic scientist, it is guiding the young minds of females in the field that she counts as her highest honour.

“I have dedicated my entire career to championing a brave new breed of forensic scientists who are using insatiable curiosity, innovative technology and nature to solve the most evil crimes,” said Dr Magni.

She has been conducting world-first research with Murdoch University Honours students, Elysia Tingey and Elsie Beales, to advance investigations into crime-related deaths in water.

Ms Tingey’s research focused on the identification of the marine fauna – like barnacles – growing on clothing made of satin, velvet, cotton and neoprene. The project in collaboration with Dr Jennifer Verduin and Dr Nicola Armstrong was recently published in Forensic Science International.

“These materials are often present in the outfit of a victim displaced in the ocean, and the identification and the ageing of the sea-creatures can provide precious information to an investigation,” said Dr Magni.

“However, we found sometimes sea-creatures do not colonise the clothing. That’s where Elsie joined with a spin-off and high-tech approach to overcome this limit.”

In collaboration with Dr Almantas Pivrikas, Ms Beales is using hyperspectral imaging, a technique able to collect information not visible to the human eye, to investigate what happens to satin, velvet, cotton and neoprene while underwater.

“We looked at the effects of the marine environment on the fabric structure and composition, and whether the time spent in the water is demonstrated by changes in their reflectance level along the electromagnetic spectrum. There is the potential for this technique to be helpful in future forensic investigations,” said Ms Beales.

Dr Magni explained studying the clothing recovered alongside a corpse in aquatic crime scenes has come under focus for many real-life investigations.

“There really is insufficient research in this field. When the photo of the MH370 wing that was found went viral online, everyone was captivated by the wing. However, it was the small barnacles I could see growing on the wing that amazed me,” she said.

“It was pretty clear to me that our research could not only be useful to the investigation, but perhaps people don’t know that barnacles can be used to back track the origin and the time the item had spent in water.”

Dr Magni and Ms Beales will present their finding at the Australian and New Zealand Forensic Science Society conference, and the upcoming American Academy for Forensic Science.

An ally for women in STEMM

Dr Magni has forged a reputation for a highly engaging and inspiring teaching approach which is challenging the next generation of scientists to think more boldly and deeply.

“Criminal cases can happen in many forms and shapes, and in several cases, the investigation is challenging because there are still a large number of questions to be answered and a widespread lack of qualified graduates that can apply STEMM skills to forensic issues,” she said.

If a student is naturally curious and able to think out of the box and in a multidisciplinary way, I believe forensic would be the best path for them!”

Ms Beales added she was keen to work with Dr Magni, being a pioneer in female led forensic science research.

“Her projects are cutting edge, innovative, and fascinating, and I consider myself very honoured to work under her guidance,” she said.

“She is not only incredibly clever and driven by her work, but also compassionate and understanding with addressing the needs of her students, such as maintaining good mental health alongside the project workload. I greatly hope to continue working with her in the future.”

How we're preparing for our fiery future