New research from the Harry Butler Institutes has identified new drone techniques to survey wildlife more intensely and accurately, and at a cheaper cost.

Dr Christophe Cleguer and Dr Amanda Hodgson worked with an international team of collaborators to develop a novel survey approach, flying small drones in small grids to record and categorise marine sightings, in this case, dugongs.

The multirotor drones were launched from a boat in the remote waters of the Pilbara in Western Australia during three field seasons across two years. 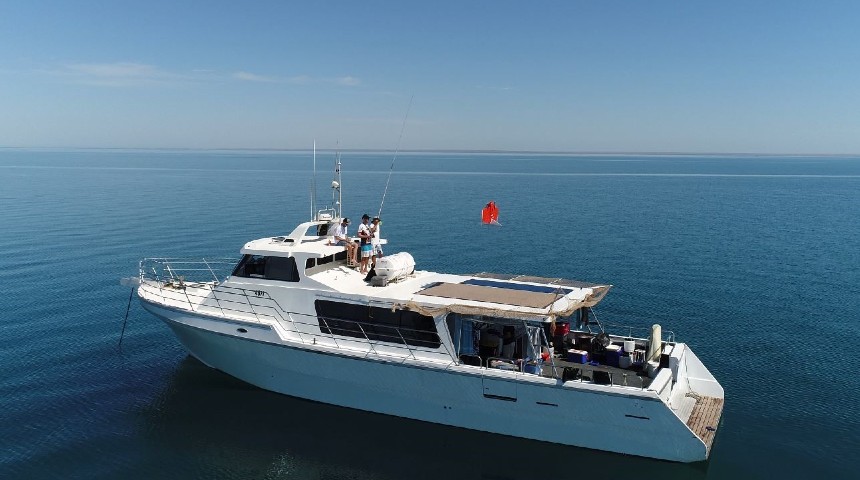 “We looked at normal aerial survey methods and designs – which are based on using planes flying over large areas – and adapted it to small drones that are limited in range and endurance,” said Dr Cleguer.

“Instead of using a horizontal flight path consisting of long parallel lines up and down the entire survey area, we tested a grid-based system where you could survey one or more grid cells at a time using smaller drones.

“The technique required minimal movement since you only needed to anchor the boat at the intersection of the grid, while keeping the drone in visual line of sight from the boat.” 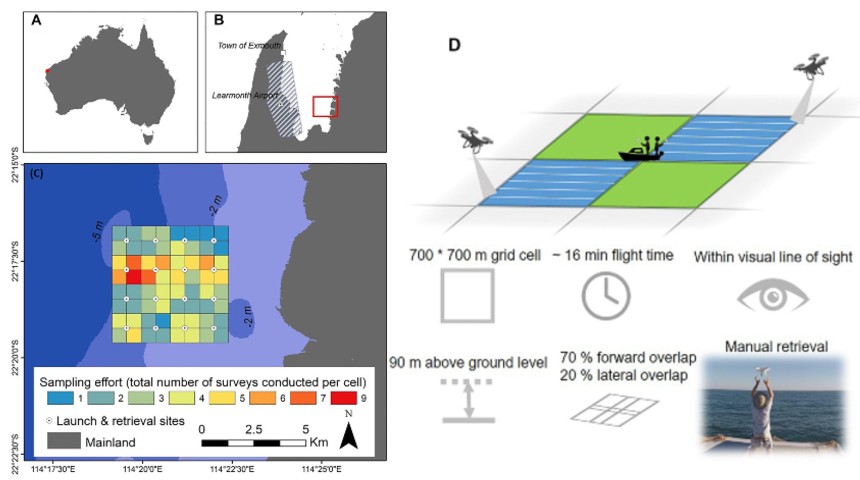 Figure 1. (A,B) Study site location (in red; hashed polygon represents controlled air space); (C) survey grid and sampling effort (the blue shaded layer represents the bathymetry); (D) diagrammatic representation of a grid survey operation and flight parameters, the green and blue cells can all be surveyed from the same launch and retrieve location (the vessel location); in this scenario the blue cells are surveyed simultaneously by using two UAVs.

Overall, the team conducted 240 flights and sighted a total of 149 dugongs, with up to 17 flights conducted covering up to 11.36 km2 per day.

Dr Cleguer said the affordability and availability of small drones had always made them an ideal tool for marine surveys, but limitations such as short flight endurance, and in many situations, aviation regulations, had constrained its use in survey applications.

“Using our grid system, we can now survey areas very intensely and very accurately and it’s a cheap operation," he said.


"This way you can afford to re-survey an area several times to understand how a species’ distribution and abundance changes over time, despite the time of day, tide or season.

“We have been able to use the aerial imagery data to correct imperfect detection of previous animal sightings in the area to develop spatially-explicit models of dugong distribution off the Pilbara.

“This a major step forward in the spatial modelling of animal density distribution. These advances are an exciting development for wildlife managers who so often rely on spatially-explicit outputs to support effective management actions.”


Dr Hodgson said undertaking research into animals like dugongs in remote locations has always been a difficult exercise.

“The method we’ve developed provides solutions for real-word applications because of its feasibility, ease of implementation, and achievable surface coverage.

You can use it to track any marine megafauna that can be seen at the surface, or indeed, terrestrial animals in a range of environments.”

“Importantly, it has potential to be used in a wide range of applications, from community-based local-scale surveys to long-term repeated/intensive surveys, and impact assessments and environmental monitoring studies.”


This project is in collaboration with Nataly Kelly from Australian Antarctic Division, Department of Agriculture, Water and the Environment Tasmania, Julian Tyne from Centre for Sustainable Aquatic Ecosystems, Harry Butler Institute, Murdoch University, Martin Wieser from Independent Researcher in Photogrammetry, David Peel from CSIRO Data61, Kelly Waples and Holly Raudino from the Department of Biodiversity, Conservation and Attractions Western Australia.

Learn more about research from the Harry Butler Institute.
Posted on: