A midnight swim to France

In the early hours of Saturday, July 30, Fiona Cullinane (20) stepped off the beach into the cold water of the English Channel to complete a goal she set when she was 11-years-old.

Pitch black; 15 degrees outside, 17 degrees in the water; she swam away from the white cliffs of Dover towards her pilot boat and onward to France.

After a false start the day before, Fiona got the ‘go’ call on Friday evening.

“They said it was probably going to be the same so not to worry too much,” she recalled.

“Then at about 7pm I got another call saying that I was going that night and I had to be up and getting to the marina by 10pm. I had a quick two-hour nap then got my stuff together and ran down to the marina.

“I think having that false start helped get rid of most of my nerves the day before. At the time I felt quite frustrated but now I think it was kind of a good thing.”

Swimming the 32km English Channel is a fickle business, especially if you have to travel from the other side of the world to do so.

Swimmers book a one-week window in which to complete their swim, and are reliant on their pilot vessel’s captain to advise when the weather and water will be obliging enough to let them cross.

The Channel is notoriously inconsistent, with tides, swell and low temperatures to contend with. Some swimmers go home without even attempting the crossing if the conditions aren’t in favour of a swim during their window.

Fiona swam on a spring tide which often has unpredictable and changing weather. 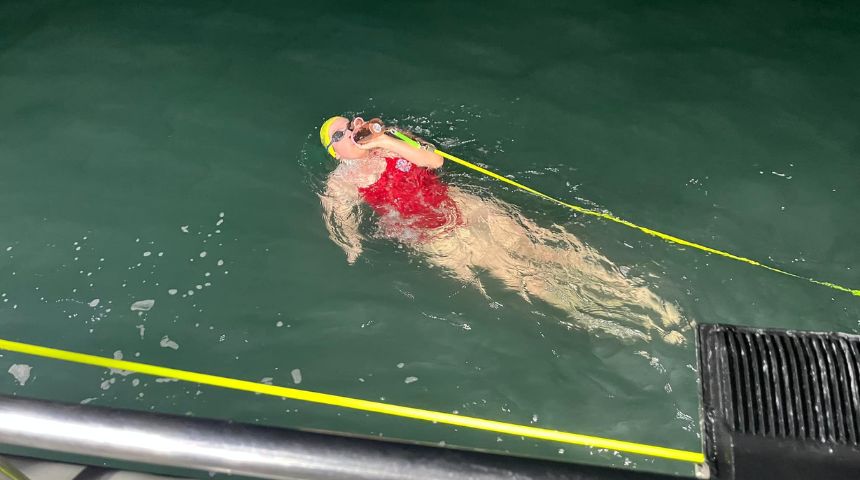 “I had to move to the opposite side of the boat to avoid rough weather for a while,” she said.

“It only got worse the closer to France we got - the tide got a lot stronger and the wind was picking up.”

But she said the swim went really well considering the conditions.

“I started the swim at midnight so for the first few hours I could see nothing but the boat next to me and the jellyfish that had been lit up underneath me by the spotlights onboard the boat.

“At times it felt like I was swimming in a washing machine and just not moving anywhere, especially when I got to the French tide.

“I was just full of anger because you look up and can see France but it doesn’t look like it’s getting any closer.”

A look at the map of Fiona’s swim confirms this was true. 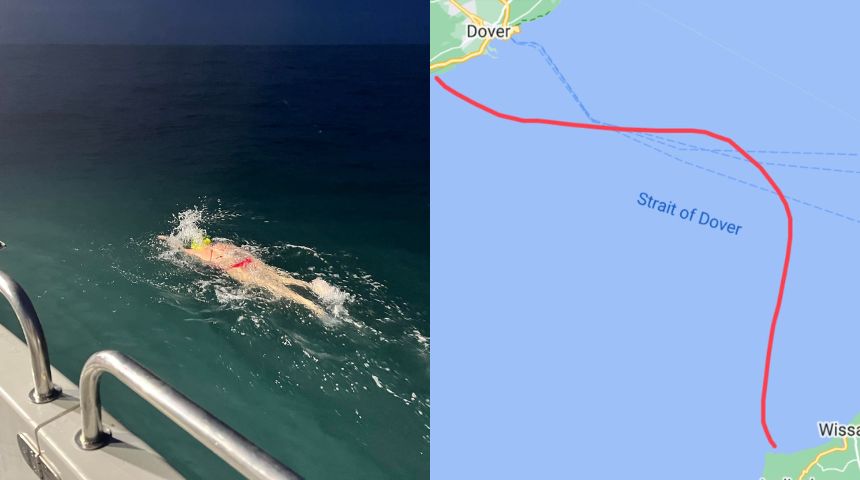 No one who makes the crossing does so in a straight line.

The experienced pilots know the Channel inside out, and work with it, easing their swimmers up and down the tides, sometimes taking them perpendicular to their destination so they can find an opening to get in to shore.

“At about the seven-hour mark my shoulders began to hurt and the last four hours was just pain management with anti-inflammatories, pain relief, anything,” Fiona said.

As well as her usual training in the pool, the National open-water medallist did cold-water training in the ocean and Swan River every week during winter, the temperature sometimes as low as 9°C.

“This was to help acclimatise my body just swimming in the cold and being exposed to those temperatures for long amounts of time,” Fiona said.

“I also did a few long swims including two, six-hour cold water swims that were used as evidence for my application to swim the Channel.

She also completed the 36km Derwent River swim in Tasmania.

“He and the club have been so supportive and have supported me through my preparation,” she said.

Eoin couldn’t make the trip to the UK, but Fiona had an experienced crew from RedTop Swim to guide her in his place.

“I had one of their coaches on board, monitoring, supporting and feeding me during the swim,” she said. 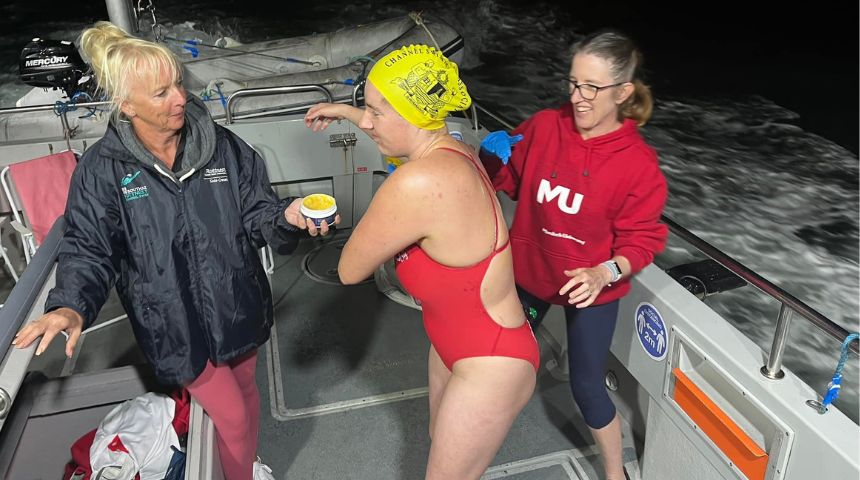 Also on board was Fiona’s mum, and her first swim coach at the Rockingham Swimming Club, former elite open water swimmer Bridget Young, who she cites as her inspiration to complete the swim.

“When I first started swimming, my coach Bridget had told us that she had completed the Channel back in ’84,” Fiona Said.

“She had been number 11 in the world in open water at the time and I decided there and then that I wanted to complete the Channel as well.”

“As I began doing 1.25km and 5km races I realised just how hard attaining this goal was going to be, so I set up smaller goals along the way like qualifying for nationals, completing the Rottnest Channel swim and others like that.

“After ticking off all of those other smaller goals, the English Channel still felt so out of reach, but it was the last one on my list - I had to go for it!

“I was so lucky to be supported by Bridget and she came over and was on my boat, encouraging me the whole way.”

Reaching France after 11 hours and three minutes of swimming, one would expect to see champagne waiting on a glorious, sandy beach.

Not so for many Channel swimmers who, like Fiona experienced, literally climb ashore wherever they end up.

“I had to scamper across some incredibly sharp submerged rocks and I ended up covered in cuts and bruises,” she said.

“But I was so happy to be done. There was a little family just off in the distance watching and as I stood up to finish, they started cheering for me.”

After very short rest, Fiona was back in the water again to swim back to her pilot boat, the Viking Princess II, and head back to the UK – crossing international boarders, no matter how you get there, requires passports and visas, which are not easily carried in swimming costumes.

“For the first few days I couldn’t move my arms above my waist,” she said of her recovery.

“It took me about four days and a few sport massages later to be able to get a full range of movement - within two weeks I was back to swimming 2km laps of Dover harbour.”

And just weeks later she is already setting her sights on new challenges. 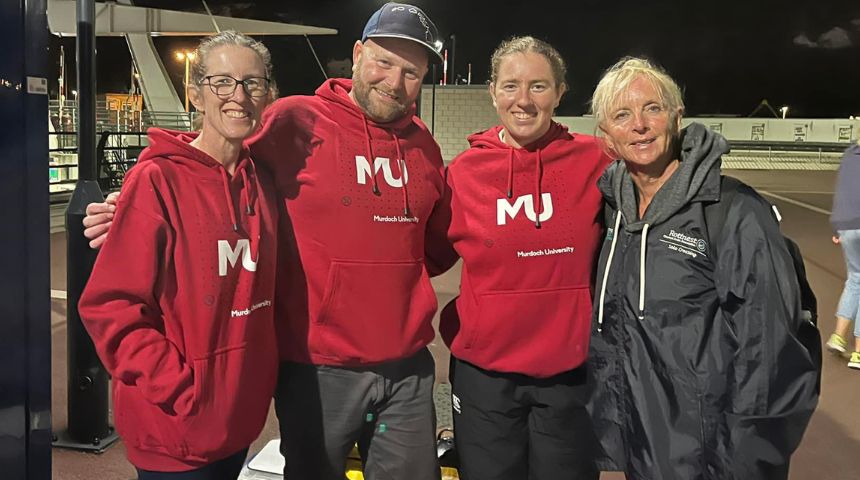 Swimming has always been a passion for Fiona.

“It’s always been where I felt my happiest - I have made so many great friends through Swimming, met so many amazing people with incredible stories.

“It is such an amazing community that I love being a part of, everyone is so supportive no matter your goals.”

As an elite open-water swimmer, Fiona juggles uni-life with her sporting commitments, but thanks to Murdoch’s Elite Athlete Program and funding opportunities, she feels supported and encouraged.

“One time I had a flight on the same day that my assessment was due and my unit coordinators were able to adjust my due dates to they didn’t clash with my travel or racing,” she said.

“I am so thankful for all the support Murdoch University has given me.”

Balance your study with your sporting commitments with Murdoch's Elite Athlete Program.
Posted on: