From South Street to San Diego, Mumbai and beyond 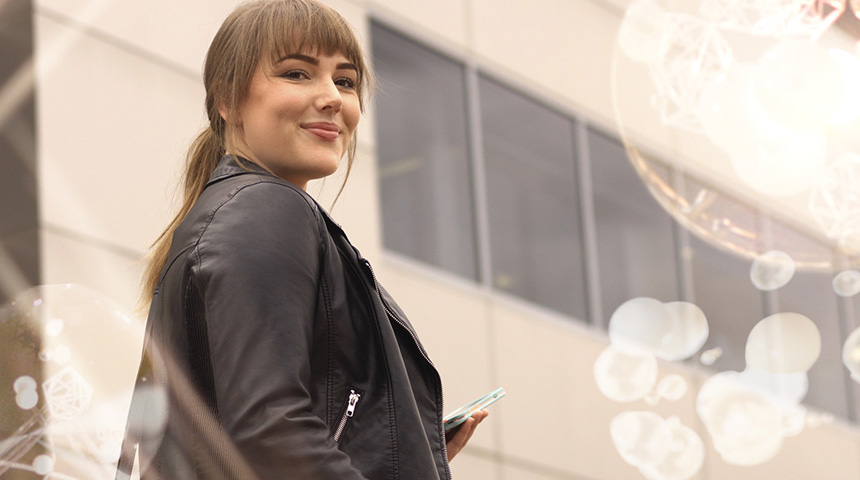 What kind of thinking does it take to face the unjust, the confronting and the heartbreaking and not run away from it, but instead work to fix it?

“It was hard. It was probably the hardest two months of my life. It was physically and mentally gruelling. There were times where I’d go into the slum to interview sex workers in a brothel and hear the most intense and awful things all day. It meant meeting people who had gone through so much to get where they were. Many of them started in sex work when they were just six or seven years old, so some were trafficked.”

Currently studying a double major in Security, Terrorism and Counter Terrorism and Criminology, Lucy is working towards a career that tackles some of society’s biggest and most confronting issues.

During the third year of her degree, she was selected as a New Colombo Plan scholarship recipient. The experience saw her spend two months in India, including navigating her way through Mumbai’s slums and brothels on behalf on an NGO to help increase health awareness, education, alternative employment and empowerment.

“There was also the challenge of actually getting people to open up because it’s so personal. Especially when I’m some young foreign girl with my fancy laptop and my iPhone. It’s not like I’m very close to what they’re experiencing. I know how much easier I’ve got it.

“There were times when I thought I was done, I’d had enough. I wanted to come home. But I thought no, I’ve got to stick it out and it did get easier towards the end.”

Lucy’s way of thinking pushes her to venture beyond our campus and make the most of the opportunities – both the uplifting but also challenging – that are on offer. While staying within her comfort zone would be easy, stepping outside it has helped her to gain different perspectives on crime, corruption, over-population, human trafficking and poverty.

“I believe that if we’ve been lucky enough to receive an education, we should be finding ways that we can improve society and make a positive impact in the world.”

Lucy can relate to that familiar feeling many of us have at some point in life, whether it’s at high school or once we’ve been working a while, where we want to pursue a meaningful and rewarding career, but we don’t quite know what it is yet.

“In high school, I had absolutely no idea what I wanted to do so I tried everything once to see if I liked it. If I wasn’t happy with one scene, I’d skip ahead to the next. Eventually I found the things I loved doing.

“In year 10, I was into novels, podcasts and shows about crime, forensics and investigations. I knew it was something I was interested in but I didn’t really know what opportunities there were to study it. I was researching courses and discovered Criminology and also Security, Terrorism and Counter-Terrorism so that’s when I realised I could translate that interest into a career that I can be passionate about.

Sometimes we just need to follow our instincts and that first inkling that we’re onto something to find the right direction. When we enjoy what we’re studying, it becomes that much easier to work out what path we want to take.

“Since joining the Murdoch community I have been amazed by how many practical learning experiences have been offered to me. In addition to my internship in Mumbai, I’ve been lucky enough to intern at the Evidence Based Policing Division of the WA Police and I’ve been on exchange to the USA where I explored the criminal justice system in a whole new context.”

“I spent six months at San Diego State University and I did work experience at various juvenile detention facilities across San Deigo, including at East Mesa, a maximum security facility for boys and girls near the Mexican border.

“It was definitely a ‘lightbulb moment’ when I was working with the kids in prison. I realised I really enjoy working with them and it’s something I’m passionate about, particularly vulnerable kids that are incarcerated or in detention centres.”

Fuelled by social justice, with a healthy dose of gratitude

From being drawn to books and TV shows about crime but not knowing what career to pursue, to securing internships and facing some of society’s most confronting and challenges issues, Lucy has let her drive for social justice fuel her.

“Sometimes I think I’m just never going to change people’s mind about crime. It can be really frustrating and disheartening. But it also motivates me and pushes me to learn more and try to raise awareness about these issues because I think education is the key to change for the better.”

It’s through Lucy’s own hard work and dedication that she’s successfully forging her own path, but she also knows that appreciation for the support received along the way helps too.

“It wasn’t until much later in my teenage years that I realised what a hard time my Dad had growing up, but he managed to move past all the obstacles and lead an incredibly successful life. He worked so hard to ensure my brothers and I receive a fantastic education and live in a happy, loving household. The contrast between how he lived and how we live still shocks me and makes me appreciate what I have even more.

“That’s why I’m making the most of my time at uni. Murdoch’s the place where you get that community vibe and you’re not just a number. It’s really important because I wouldn’t have been able to do the things I’ve done without this level of support and flexibility.”

Back yourself and just give it a go

When we’re trying to find our place, sometimes the best advice is to just start exploring.

“Give everything a go. That’s something my parents have taught me. Whenever I’ve tried to give up and said something is too hard or I won’t stand a chance, they give me a stern talking to and tell me that’s the worst attitude to have because the only way you’re going to get anywhere is by trying.”

“So that’s what I’ve done. I’ve applied for basically everything that’s been presented to me so at least I’ll know I’ve tried. And it turns out that a lot of the time I’ve been successful – I’ve gone on these amazing overseas trips and done incredible things and it’s purely because I thought I’d just give it a go.”

We’re glad Lucy did just give it a go because it’s this type of thinking --- the type that takes the leap and explores new territory – that just might make the world a safer place one day.

Where will your thinking take you?

If you'd like to learn more about anything discussed in this article, please contact our Student Ambassadors.