Why Scotland native Carlos can't get enough of the WA outback 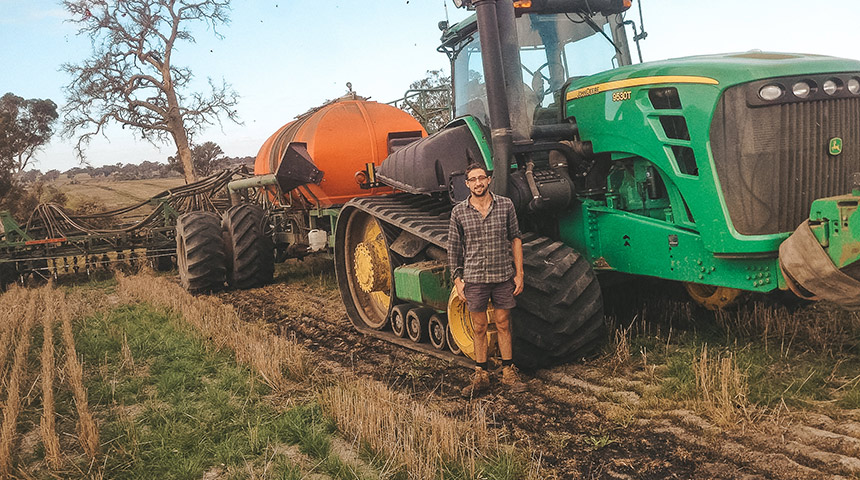 Carlos de Sancha grew up exploring the countryside on the other side of the globe, but it's in WA's wilderness that he has found his niche - and a reason to study at Murdoch.

A Scotland born-and-raised tree surgeon, Carlos can now be found driving around WA's South West in a ute with a dog in the back.

Originally from Glasgow, the 33-year-old had been working in WA for several years as an arborist when he realised he wanted to know much more about his 'patients'.

"It was a bit of a light bulb moment for me - both of my parents went to university but at no point did either of them push me to follow in their footsteps.

"Running my own business there were lots of things I didn't understand about the environment I was in. If trees got sick I wanted to know why, or even why they were growing the way they did.

"I'd done a fair bit of farming out in the Wheatbelt when the arborist work was quiet and out on the farms I would ask more questions about the landscape.

"I had this moment where I realised I needed to go and study so that I could find the answers. It's been a long road to get here as I didn't have much of an education. I left school when I was 16 and went straight into the workplace.

"I studied across the road at Challenger TAFE and used to look across at Murdoch University and think in the back of my mind, 'I want to be over there'.

"Because it's been such a long road, I feel a sense of appreciation of the opportunity to study at university. Being a bit older also means I can relate to what I'm being taught through past experiences."

Carlos strongly considered studying environmental science at Murdoch, but eventually decided on agricultural science due to his experience of working on the land.

"Environmentally, farming has been far more destructive than any forestry or mining. But I also love going out into the Wheatbelt and shooting foxes, driving tractors and helping with harvests.

"If I'd studied environmental science, I could have missed out on that connection with the people on the ground."

Ongoing conservation work with the Parks and Wildlife Service at the Department of Biodiversity, Conservation and Attractions keeps Carlos in close contact with the WA forest system, although he worries about the loss of the northern Jarrah forest due to bauxite mining.

"We are losing more than 1,000 hectares of premium Jarrah forest every year - that's an incredible amount of lost biodiversity.

"As an arborist I look at the young trees in the rehabilitation areas post mining and most of them will never resemble the majestic tall trees that once grew there.

"It may take millennia for the forest to recover and that's without even bringing climate change into the equation. I fear future generations may have some serious questions for us."

Sticking around in Australia

After welcoming his first child in December, Carlos suspects he'll stay Down Under for some time to come.

"Australia as a whole is so unique to me - it's so natural, in a sense, especially coming from the UK where the human imprint is very evident.

"Then you come to Australia and see an environment that is so pristine, especially in Western Australia.

"There's such a small population over here and I can go out and catch my own food -  fish and roos and those kinds of things - and just immerse myself in that ability to go out and do my own thing."

Ready to make a difference and help the natural environment? Explore our range of science courses to find your path. Interested in moving to Western Australia to study science? Check out our study options for international students.
Series: