VIDEO: Vishnu powers his PhD with a renewable focus 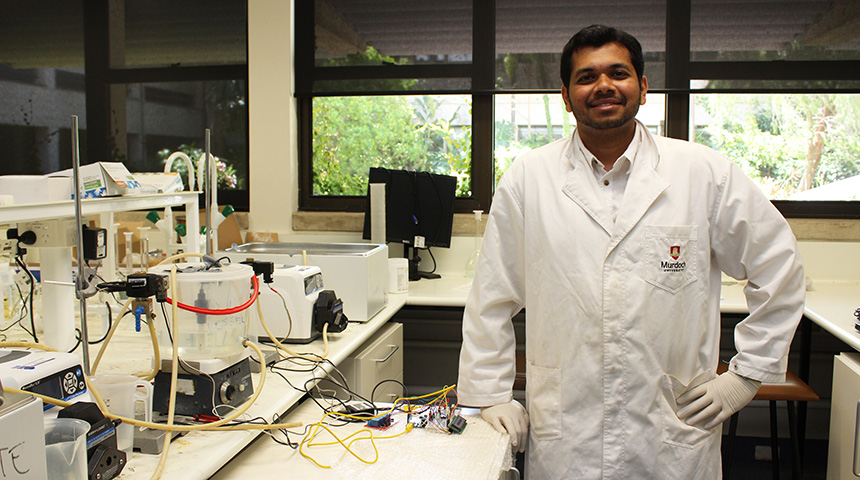 The potential to create a fresh and reliable supply of water in remote communities has Vishnu Ravisankar working on a passion first ignited thousands of kilometres away.

Vishnu Ravisankar was a still a high school student when he realised he wanted to forge a career looking for alternative ways to create and harness energy.

"During school back home in India we would have power cuts two to three times every day," he explains.

"In summer it's very hot and demand is very high. The power cuts were one of the main reasons I got interested in renewables."

In an Indian academic environment where environmental concerns are not always top of mind, Vishnu initially put that interest on hold when he started his undergraduate studies a decade ago, selecting a bachelor's degree in electronic engineering.

But since leaving his home country, initially for the University of Arizona and then on to Murdoch University, Vishnu has revelled in the opportunity to explore renewable energy and the potential benefits it could bring for desalination.

Large-scale commercial desalination plants already deliver half of Perth's drinking water but it's small outback communities that Vishnu hopes will be helped by his recently-completed research project 'Improving Energy Efficiency of Membrane Distillation'.

"Large-scale desalination relies on reverse osmosis, which requires continual and good electrical supply. Remote communities in Australia are mostly off the electricity grid but they do have plenty of solar," Vishnu outlines.

"The technology I'm working on for desalination is membrane distillation. It's not pressure-based but thermal-based and those remote communities also have plenty of heat.

"The membrane costs are very high still but the research is good. It's proven at a lab-scale and a pilot-scale.

"I do see a future where groups of small communities in the outback can have a desalination plant and some technical expertise given to them, so they can operate and maintain it."

Feeling at home in Australia

From his native India, to the Tucson desert and now Perth, there's a common theme to Vishnu's travels: naturally arid landscapes where long-term access to fresh water is a crucial challenge.

He says he got a crash course in adjusting to American university life at Arizona, but describes the 15,000km move to Murdoch in 2015, where he linked up again with world-renowned desalinisation expert Professor Wendell Ela, as an easier one.

"The only real difference I found was driving on a different side of the road to America - and in India we drive on the same side as here, so it actually feels closer to home.

I do find the professors to be friendlier at Murdoch. Any time I need to speak to them I can just pop them an email - sometimes they just give me their whole week's calendar and say to just pick out some time.

Vishnu's next move will be to step outside the Murdoch environment and put his PhD in environmental engineering to use professionally.

He's looking forward to the challenge and is grateful for the exposure Murdoch has already provided to the industries in which the 28-year-old will be seeking employment.

"I'm going into industry purely because after 10 years in academia, I'd like a small break. I've been to certain industries through Murdoch and the work they do is very similar to here - just scaled up.

"I think I will feel right at home."

Whether you're looking to make difference through your current career, or through a new one, our range of postgraduate courses can help to get you started.
Series: