VIDEO: Swapping the dream of a Baggy Green for Paris 2024 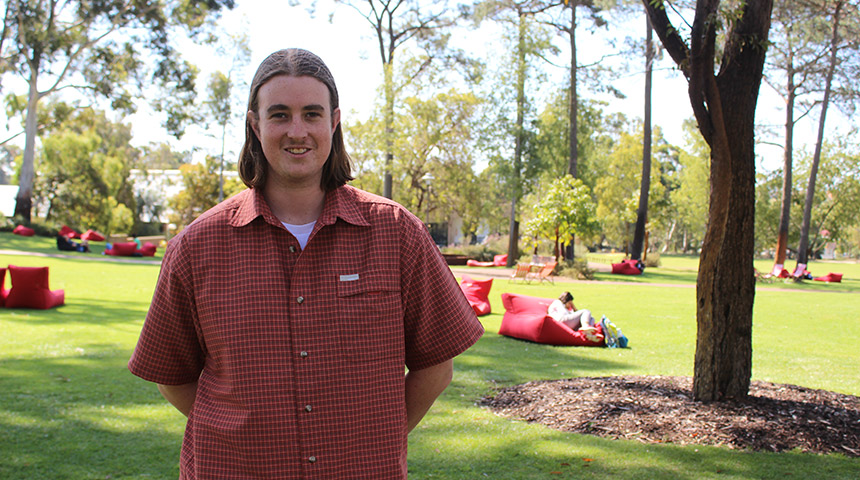 Aspiring sports journalist Jackson Barrett is proving you don't necessarily have to be in it to be a winner.

If everything goes to plan, Murdoch University student Jackson Barrett will be at the 2024 Olympics.

Not, as he once would have liked, as a competitor. But he still hopes to be heavily involved in documenting the triumphs and tribulations as some of the best athletes on the planet gather in Paris.

Having mostly shelved his own on-field ambitions, aside from weekend cricket outings for South Perth, Jackson is planning on a career in sport by realising a long-held aspiration to be a journalist and commentator.

A multi-pronged Bachelor of Communication course is his first formal step towards that goal.

"Sports journalism is what I've wanted to do since I was eight or 10. Coming out of high school I was pretty sure I wasn't going to get a Baggy Green and I looked at the cricket media landscape and saw it was pretty much all either elite writers or ex-players.

"My ATAR was OK, so I decided to put a sports science degree in with journalism…to have that bit more than just being someone who enjoys sport. I'm now doing a Bachelor of Communication, with a major in journalism and a secondary major in exercise science.

"I look at Gerard Healy, who I know is Brownlow medallist, but he's also a physio and I really liked the way he's incorporated that into his media work and commentary."

When dedication leads to that first gig

While exercise science studies will equip 19-year-old Jackson with technical knowledge that might help him decipher rotation policies of Australian fast bowlers or the latest string of injuries in the AFL, he's already been getting real-world experience in his field of dreams.

A chance opportunity stemming from a careers event in his home town of Bunbury two years ago led to an unexpected radio debut on ABC South West.

"I was in a phys ed and my teacher said to me, 'This lady wants to talk to you and you need to call her back before lunch.'

"It turned out she was filling in as ABC breakfast host and she wanted someone to talk about sport. She said, 'If you can prepare something for Saturday morning I'll give you 20 minutes to talk about it.'

"I hadn't really thought about radio at that point but two days later I was in the studio."

Two years on from that first gig and Jackson is still a regular on the airwaves south of Perth talking all things local sport, plus a mix of national and international headlines.

One thing that has changed is his location, with his family making the move up to the city while he studies at university.

What hasn't changed is his determination to break into an industry where opportunities can sometimes be in short supply.

From Bunbury, to Murdoch then onto the Olympics

Jackson believes his Murdoch journalism studies, including specialist training in digital journalism, will equip him with skills he can take straight into a newsroom.

That might involve starting his career covering rounds other than sport, but Paris 2024 will remain firmly in his mind.

"Being a general news reporter is something I've thought about and I'm keeping options open - and that's something you learn at uni.

"I knew going into Year 11 and 12, that I would do human biology, phys ed, English and maths, but by doing something like politics and law and history as well, I would be better positioned to write about other things than sport.

"If I was asked to write about something else I know I'd be able to go and find the information and sources that I needed.

"Just watching the 2016 Olympics, what blew me away was the volume of the coverage - and I knew that I wanted to get there one day.

Whether you're aiming for Paris or Perth, our wide range of courses can help to get you started. Explore where your thinking could take you today.
Series: