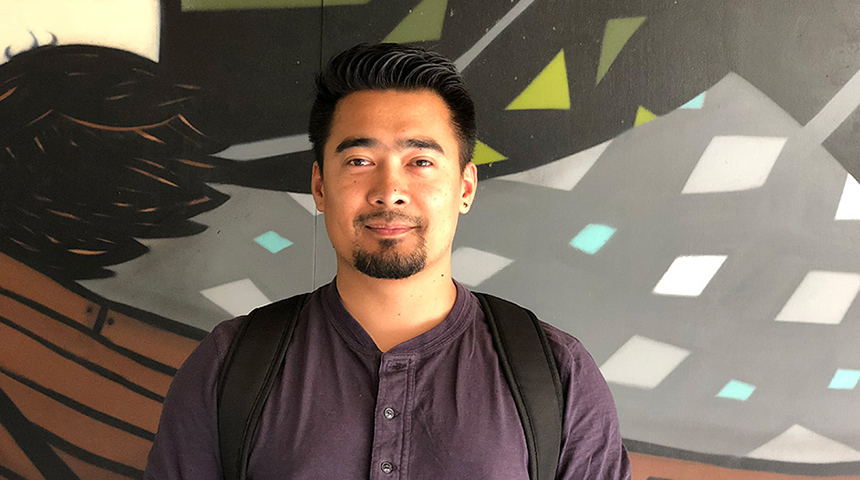 From the mountains of Bhutan to the sunny beaches of Perth, Sreej Pradhan is on a mission to help.

He comes from a country perhaps best known for adopting gross national happiness as an official measurement, but it was unhappiness that led Sreej Pradhan to travel from Bhutan to attend Murdoch University.

Not his own, but that of the biochemistry students he taught in secondary school at home, who would come to him with problems outside the classroom environment which he was unsure how to deal with.

"There were times when they came to me to seek help with their lives and I wasn't in a position to help them because that wasn't my role as a teacher.

"There was a growing need for counsellors as mental health was an important problem, especially in a small country like Bhutan.

"At the time we didn't have an institution that offered a counselling course, but I had heard that Murdoch did."

And so Sreej swapped his tiny landlocked home of just 38,394 square kilometres, with an average altitude of more than 2,000 metres and a strong claim to the world's highest unclimbed mountain, for the beaches of low-lying Perth and the expansive 2.65 million square kilometres of Western Australia.

Helping others while studying abroad

It reached 30 degrees on the Friday he arrived in February 2017, dropping to -5 in Bhutan on the same day, meaning climatic and culture shocks were early issues he had to deal with.

English was a second language for Sreej in Bhutan and he was also accustomed to an academic environment where there was a distinct divide between teacher and pupil.

"Lecturers and professors, you are almost on the same level and wavelength as them in Australia, whereas in Bhutan it's different because of the way we look at discipline and respect.

"I have a couple of friends back in Bhutan who are interested to undertake the course that I'm taking and I've been telling them how approachable the lecturers are and how different it is.

The university really helped me to adjust to life here as well, organising events where I could interact with the locals as well as the international students. That helped me develop a network.

A strong Bhutanese contingent at Murdoch also assisted Sreej in adjusting to life in Australia and he enjoyed the chance to return the favour for some of his compatriots in his work at the on-campus Caladenia Counselling Clinic.

The Clinic provides safe, supportive and affordable counselling for people who are experiencing challenges in their lives or dealing with difficult situations.

"I had the opportunity to counsel fellow Bhutanese in my language, which was a great – and a bit of a surprise for them."

While Sreej downplays his English abilities, he's so fluent in conversation that he will be completing a practical placement counselling vulnerable youth at the YMCA in Leederville.

With the theoretical part of his Masters in Counselling completed in late October, the 31-year-old is relishing the chance to help out the kinds of youngsters who once came to him for help in Bhutan.

"The clients at the YMCA come from a range of backgrounds and the most common thing I think is that they will be experiencing anxiety and stress, often with relationships.

I feel quite privileged in the sense I can help my clients navigate through their problems – there is a real sense of satisfaction to help them through.

"Having gotten this chance I now I think I'm in a better position to be able to go back home and render this kind of service there."

But a return to Bhutan can wait for a couple of years, Sreej hopes.

"I'm planning to apply to a couple of places to get the real-life hands-on experience in working as a counsellor – that is my top priority."

He and his wife Renu have fallen in love with Perth's proximity to the ocean. Swimming – a pastime rather less en vogue in Bhutan – might be next on his agenda for his Australian learning experience.

"I would also like to take some time off and fully enjoy Perth. My favourite thing is the beaches and so I'm looking forward to going there and spending some time with my family."

Ready to put your drive to help others into action? Explore our range of courses to start a new career path or expand your current one.
Series: