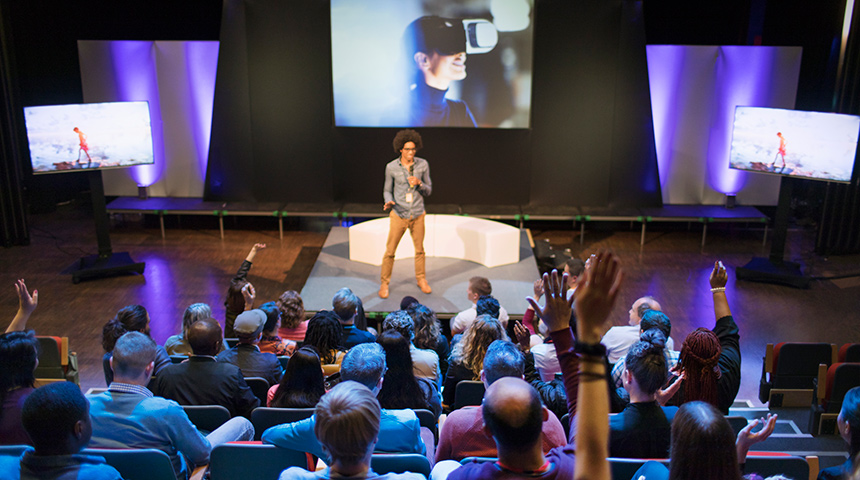 Talking to a big crowd is a scary thought for many of us. But with the help of Jethro Schoeman, some of Murdoch's international students are learning to do it in a language that was once completely foreign to them.

The fear of public speaking is so real that for some people it's considered more terrifying than death. There's even a clinical term for it: glossophobia. So you can imagine the challenge that might confront anyone who has to address a crowd of people in something other than their first language.

That was the thought in third-year philosophy-law student Jethro Schoeman's mind when he established a program at Murdoch University aimed at helping international students become more comfortable speaking English in public.

"There's just a really big fear of looking stupid in front of lots of people. When I thought about those issues, I figured the best way to help the students was to start a public speaking workshop.

"We broke it up into two streams, students who had a really big confidence problem and those who didn't have so much of a speaking problem, as they did stylistic issues.

"For the first stream, we had them come up and do impromptu speeches. This got them used to speaking and messing up in public, allowing them to learn how to recover well.

"The second stream addressed stylistic errors like excessive blinking, throat clearing or saying 'um' too much."

Jethro, together with his close friend Loic Munso, were recipients of a Murdoch Students as Change Agents in Learning and Teaching (SCALT) grant, which they used to fund their public speaking program.

The topic was close to both of their hearts, with Loic hailing from Mauritius and speaking Creole, French and English, and Jethro coming to Perth eight years ago from South Africa. He's a native English speaker but that didn't stop some befuddling moments in his early days in the country.

"When I came to Australia it was hard to understand what people were saying due to all the slang."

Currently vice-president of the Murdoch Student Guild, Jethro has been in a good spot to observe the changes that have taken place to activate the Murdoch campus.

"What I really like is every day is different - I might be helping a student one day, the next I may be negotiating with the uni.

"But the biggest thing is being able to help people. I wouldn't have been able to set up the international public speaking course without my guild role.

"It's also been great to see how much Murdoch has changed over the past two years with the Student Hub and so many more places popping up to enjoy and interact in.

"I think Murdoch is doing the activation aspect really well and it's going to be a space to watch."

Jethro is also looking forward to watching progress of students who have passed through his public speaking program. The 23-year-old's pride in his achievement is obvious, as he reflects on how far some of them have come.

"We had two students so shy they could barely say their name and what they were studying. In the last session, they were able to present a two-minute argument as to why everyone in the room should stop what they are studying and switch to their degree.

"It's an extremely difficult thing to do and their confidence and progress showed me that we were actually helping people."

Are you ready to join a global community of independent thinkers who are working towards building a better, more sustainable future? Find out more about becoming an international student at Murdoch.