VIDEO: From ‘Murder She Wrote’ to murder she solved 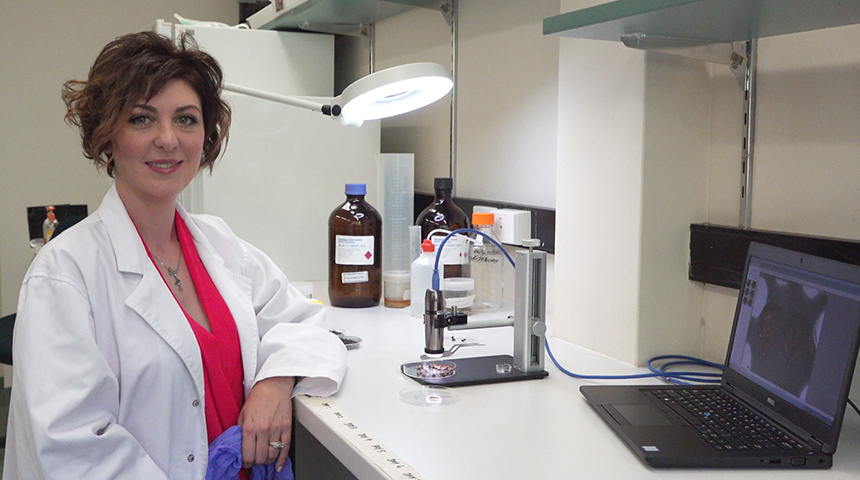 While Jessica Fletcher, the star of ‘Murder She Wrote’ has long since disappeared from our screens, Murdoch lecturer Dr Paola Magni is helping put the real science of forensics in the spotlight.

By her own estimation, a young Paola Magni watched just about every episode of 'Murder She Wrote' - the long-running crime-drama series that became a world-wide TV staple throughout the 1980s and 1990s.

While Angela Lansbury's weekly crime-solving was largely unscientific, it helped trigger Paola's keen interest in the detailed "who, what and when?" of criminal activities. This curiosity still burns strongly in her roles as a forensic science lecturer at Murdoch and expert witness in court cases.

"My field of work is forensic biology - specifically forensic zoology. Basically I work with the little creatures found at crime scenes to investigate different aspects of the crime itself. This includes where the crime happened, who the victim is if they're not found at the crime scene, what happened and who the people involved in the crime are.

"The perpetrator and the victim have some control over themselves, but the environment cannot be controlled, especially when it comes to the little creatures. Using biology, a creature's presence or absence at the crime scene can allow me to work out things like time of death and the presence of drugs or toxins."

Those little creatures can be everything from insects to millipedes, seashells and barnacles. One of the crimes Paola worked on involved fireflies, another revolved around a tiny bit of plankton.

From the courtroom to the set of CSI

Her experience and unique skill set means she has been in demand not only to testify in court cases, but also as a technical adviser to the worldwide TV hit: 'CSI'.

Paola spent eight years working on the Italian version of the series and says the science presented on screen is as realistic as it can be.

"I was involved for eight seasons in not only making up the cases, but also showing how we would solve the cases. Sometimes the science was too involved for TV, but it's all based and presented like real science.

"It was really good, I had the chance to work behind the scenes and also instruct the actress playing a forensic entomologist on how to move in the lab."

Forensics around the world

Originally from Italy, Paola moved to Perth to complete her PhD and believes it's vital her students are given the opportunity to experience the forensics world outside of Australia. She also studied in the United States of America at the 'body farm' Anthropology Research Facility.

While juggling court work with time in the lab at Murdoch can be challenging, Paola says they go hand-in-hand.

"The classroom is a completely different world to the courtroom and I take both situations very seriously. What's good about doing both of these jobs is you can take the experience in the court and pass it on the students, teaching them what to do and what not to do but also the feeling you have during court cases.

"The teaching side is different but it's very important for the students to have a lecturer who is actually involved in actual crime scenes because one day they'll do the same. We are preparing students for forensic crimes that can happen anywhere, not just in Australia.

"We have students coming here who will go back to their countries to work in investigations and we have Australian students that can do the same thanks to the experience they have acquired here. But during their studies we also strive to provide students with international experience."

Thanks to the Australian Government New Colombo Plan, Paola has been able to take Murdoch forensic students to the Indo-Pacific area, in particular Malaysia and Singapore, for an international experience of crime scene simulation alongside local forensic students.

Due to the success of the program, Paola is now working towards establishing further relationships with overseas forensic institutions and developing an ongoing transnational forensic program.

Adding another feather to her cap, Paola produced 'The Bug Whisperer', a four-hour crime podcast in Italian for SBS, and she admits she's intrigued by the 'CSI effect' that has thrown forensic science into the global spotlight. She was also invited to discuss this aspect of the forensic sciences at the TEDx event 'Perception vs Reality' held in Fremantle in September 2018.

Her court resume includes murder cases, wildlife and animal cruelty investigations and, in conjunction with the police, aquatic crime work.

"We live on a planet that is 70% water and we are not aquatic animals, so a crime scene can happen in water even more often than a terrestrial environment. This includes natural water like seas, oceans lakes and rivers but also artificial water, like a bath tub, shower or swimming pool.

"Not much research has been done in this type of environment that can be provided to a court in an investigation. However, when we have big cases like the disappearance of MH370, it makes sense to study aquatic environments."

Are you ready to put your curiosity to work? Learn how to investigate crime from a scientific viewpoint with a degree from Murdoch. Learn more about the Bachelor in Forensic Biology and Toxicology, the only course of its kind in WA.