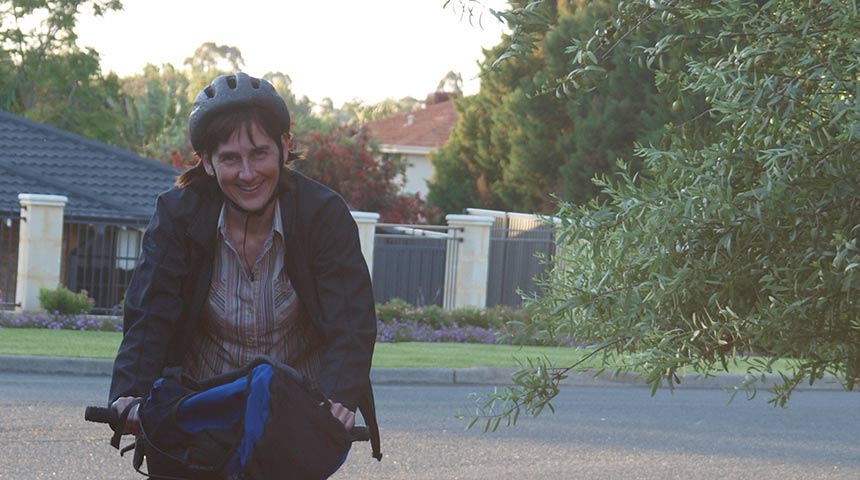 Environmental destruction on the other side of the world helped Martina Calais find a purpose in life and a career at Murdoch University.

Hiking in German's Black Forest as a teenager, a life in Perth and a career at Murdoch University never even entered Martina Calais' mind.

But it was those walks, and the environmental damage she observed, that set her on the path to becoming a champion of renewable energy research and teaching in Western Australia.

"I had a dog when I was a teenager and I'd walk the dog a lot. I'd also go cross-country skiing and I guess my family was fascinated with nature and we did regular hiking and outdoor activities," Martina reflects.

"And so we spent a lot of time in the Black Forest and we also saw the damage that was being done there.

"In the 1980s it was mostly coal-fired power stations that were not equipped with the right filters and emissions from motor vehicles that would cause acid rain. In exposed areas particularly, you could see the harm that was happening."

By the mid-1980s, it was estimated nearly half the trees in one of Germany's most picturesque and popular tourist areas had been affected by acid rain.

Martina's passion to save the forest and fight for environmental issues initially manifested itself in joining her family to demonstrate against the causes of the destruction.

It would ultimately also lead to her swapping the towering pines of the Black Forest for the bushland that skirts in and around the Murdoch campus.

But it would be a roundabout journey that involved her twice following in her father's footsteps, initially by studying electrical engineering at university and then by moving more than 13,000km to Perth.

"I really struggled," Martina recalls of her early university days, "It was very theoretical study and also very male-dominated. Out of 580 students 20 were women and that was quite intimidating. I only really continued because I was passing.

"I think the turning point was I when had the opportunity to do an internship in Perth. My father had come out here on a sabbatical and he put me in touch with a company which designed electronics for remote area power supplies using photovoltaics.

I was able to work on a power supply for a health clinic and village in Vietnam, allowing them to charge their batteries.

"I finally could see why I was studying electrical engineering. There was a connection. So when I moved back to Germany I knew that I wanted to be involved in the renewable energy application area, even though at my university there were very limited choices in that subject area."

It wasn't long before Martina would return to Perth as an exchange student at Murdoch's then-Energy Research Institute.

And although she eventually went back to Germany to complete her undergraduate studies, when it came time to embark on a PhD, another stint in Perth beckoned.

This time the move was permanent.

From PhD student to Senior Lecturer

"For Europeans coming to Perth the weather, the nature and the environment are particularly attractive.

"I found it very appealing to be able to cycle around Perth, having beautiful weather most of the year and experiencing a really exciting, different natural environment.

"Being from Europe that fascinates me. The Murdoch campus with its native flora and fauna provides an amazing work and study environment, which I enjoy whenever I am on campus."

These days Martina is not only a senior lecturer in Renewable Energy Engineering at Murdoch, but also a chief investigator in a research project in partnership with Horizon Power.

In her role she seeks to increase the use of distributed solar photovoltaic and battery systems in Carnarvon and with that, reduce the dependency on fossil-fuel generation.

A lot has changed, personally, professionally and in society, since those teenage walks and skiing tours in the Black Forest and being a female very much in the minority at Darmstadt University of Technology.

"We started off with four, five, six students in renewable energy engineering and we now have between 20 and 40 in our classes.

"We're finding that our students are getting jobs in consultancy companies, utility companies and solar system-designing companies.

"There's really a very exciting time in front of us. The electrical power engineering area, which traditionally has been very static, is now very rapidly transforming.

"Solar photovoltaic, distributed generation and battery systems are changing the landscape of industry and these topic areas are exactly what we are covering in our degree."

Ready to a make a difference through technology? Explore our range of engineering and technology courses to find your path.
Series: