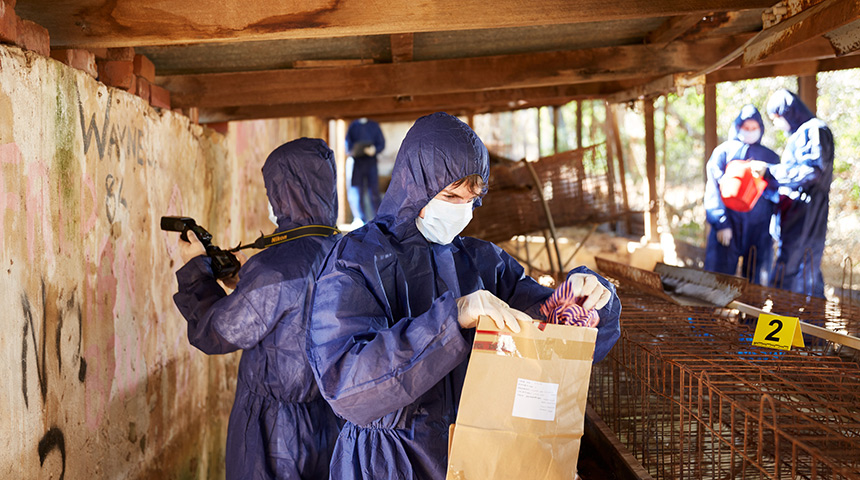 Believe it or not, WA is home to a number of high-profile missing persons and homicide cases that remain unsolved. Murdoch's forensic and criminology experts, Brendan and David, walk us through five cold cases that have captivated WA.

Murdoch Senior Lecturer and forensic scientist, Brendan, has worked on thousands of serious crimes throughout Western Australia, including the management of numerous high-profile homicide and serious assault investigations.

In addition to being a Senior Lecturer in Criminology at Murdoch, David is the director of an international research network, Researchers in Behaviour Sequence Analysis (ReBSA), and regularly consults with law enforcement organisations around the world on current and cold cases.

The following five cold cases were chosen by Brendan and David due to either their previous assistance on the cases, or their desire to work on them in the future.

This case has all the hallmarks of an episode of Underbelly. A murdered brothel madam, allegations of corrupt police and old-fashioned gangsters. The murder of Shirley Finn has remained the subject of intense attention for decades and is currently the focus of a coronial inquest.

Romuald Zak was found dead two days after he was reported missing from his ward at Graylands Hospital. While his death has been ruled a suicide, his family and a number of forensic experts from around the world believe his death to be a homicide.

19 years ago, Sarah McMahon left her new workplace in Claremont and vanished without a trace. 12 days after her disappearance, her car was found at Swan District Hospital and her phone on the Great Northern Highway. Her body has never been recovered and no one has ever been charged in connection with her disappearance.

After a night out in the city with a girlfriend, 18-year-old Kerry Turner was last seen getting into a car on Shepperton Road in East Victoria Park. Four weeks later, her body was found at Canning Dam hidden in bushland. Her disappearance and murder remain unsolved.

Mother of two, Barbara Western was last seen drinking at Irene’s Park Tavern (now Franklins Sports Bar and Bistro) on Albany Highway. Her skeletal remains were found nearly five years later in bushland near Karragullen. Due to Barbara's body displaying the trademark signature of the Birnies’ (jewellery and other items placed beside the body), they remain suspects in her killing.

Brendan and David head up Murdoch's Cold Case Review Group with an aim of re-analysing cases and working with investigators, families and victim advocates to explore evidence and uncover new leads.

Using forensic psychology, criminology, and forensic science, Brendan and David provide a unique and multi-faceted approach to cold case investigation. Together, they've worked on a number of high-profile cases, as well as assisting police departments on local cases not open to public knowledge. Their priority is in assisting law enforcement to close cases.

The Review Group also allows Murdoch students to gain training in investigating cold cases as part of their course. A key part of this training is ensuring students can critique cold case investigations, becoming aware of false leads and hypotheses proving biases. For example, students are often required to analyse Edward Edwards, a serial killer from the US.

Convicted of five murders, Edwards is also connected by amateur theorists to various unsolved cold cases including the Zodiac Killer, the murder of Jonbenet Ramsey, and the Atlanta Child Killer. While Edwards is not presumed by experts at Murdoch and around the world to be responsible for these murders, it provides an excellent opportunity to train students in critiquing the difference between scientific evidence (DNA and fingerprinting) and anecdotal evidence (assumptions and fitting data, or cherry-picking data to ‘prove’ hypotheses).

For many students, like Murdoch graduate Tiana, participating in the Cold Case Review Group is a highlight of their university journey, "Being selected to work on the cold cases is one of my greatest achievements, allowing me to work alongside both my academics and peers."

Think you have what it takes to solve and investigate crime? Check out our combined Criminology / Forensic Biology and Toxicology degree, it's the only one of its kind in WA. Or discover how you could study at Murdoch as an international student.
Series: