The 10-over cricket match was held between a group of Murdoch advisory board members, alumni, and friends, and a guest eleven from Murdoch’s cricket partner, the West Australian Cricket Association (WACA).

Coached by Becky Grundy, Head Coach of the Western Australia Women’s team, the Murdoch XI lifted the trophy for the second year running, scoring 2 for 110 to the WACA CEO XI’s 10 for 88.

Shelley Cable, CEO Generation One at Minderoo Foundation, was crowned best on ground after an impressive two wicket over, and a spectacular catch that was a game changer for the Murdoch XI.

6PR radio host Simon Beaumont was behind the microphone, treating spectators to ball-by-ball commentary during play and interviews with the players between overs. 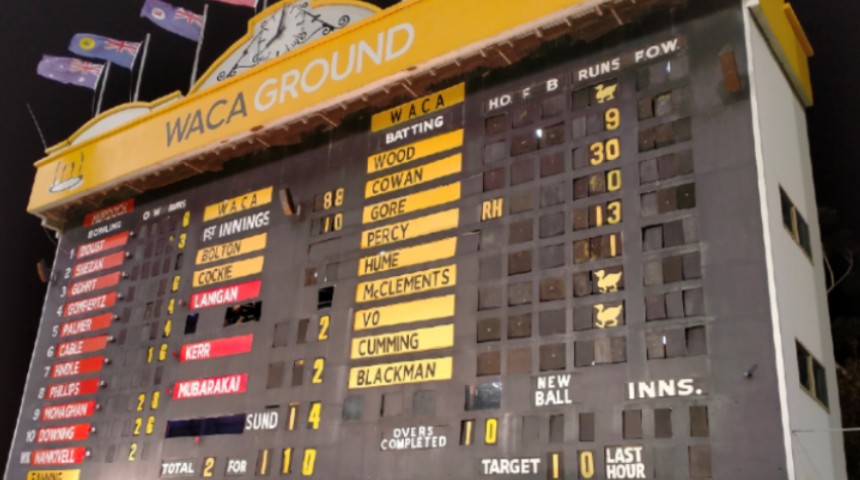 Addressing players and spectators after the match, Murdoch University Vice Chancellor Eeva Leinonen said that, despite a disrupted year due to the COVID-19 pandemic, the partnership between Murdoch and the WACA has continued to flourish.

“Five of our Sport and Exercise Science students gained invaluable experience and insight during work placements, learning from the WACA’s Strength and Conditioning staff over the course of 2020,” Professor Leinonen said.

“We had a PhD candidate placed with the WACA investigating the physical demands on fast bowlers using wearable accelerometer and GPS technology during matches and training,” Professor Leinonen said.

“This research is helping the WACA sports science staff understand when fast bowlers are starting to fatigue during a match, as well as the different demands on bowlers across T20, one-day, and multi-day match formats.”

Vice Chancellor Leinonen said she hoped the event would continue for years to come.

“I am confident the VC Challenge Match, while a comparatively new event on the cricketing calendar, will develop a rich tradition over the years ahead.”

A scene to believe in: Noongar mural encourages allyship and drives change

Murdoch University does its bit for Plastic Free July