Perth’s largest centre of excellence was a fitting backdrop as Murdoch University honoured some of its most eminent alumni last night.

The extraordinary careers and outstanding achievements of four Murdoch University graduates were celebrated at Optus Stadium in front of the University’s leading academics, alumni, and VIPs at the 2022 Distinguished Alumni Awards.

The remarkable alumni were all chosen for their demonstrated outstanding qualities and for making significant contributions to both their profession and the community.

The first recipient, Nyikina man Wayne Bergmann, was once described by The West Australian newspaper as one of the most influential Aboriginal people in Western Australia.

Currently executive chairman of the National Indigenous Times, he has been recognised as one of Australia's leading advocates for Indigenous self-determination through economic empowerment and opportunity.

Wayne has maintained a focus of encouraging Aboriginal participation in the modern economy.

Between 2001 and 2011, Wayne was Chief Executive Officer of the Kimberley Land Council.

He established the Kimberly Ranger Network which employs Indigenous land and sea managers to undertake cultural and natural resource projects to improve and enhance the unique biodiversity and cultural values of the region.

During his tenure, native title was determined over 65% - 70% percent of the Kimberley region and he was instrumental in lobbying government to grant National Heritage Listing to over 19 million hectares of Kimberley land and sea.

Wayne said studying at Murdoch had taught him to think outside the box and that it had lit an inextinguishable spark inside him.

Wayne highlighted the support he had received from the Kulbardi Aboriginal Centre and Murdoch Law School that enabled him to pursue his dreams.

“When a family knows their child is being held by someone, they feel content and they feel safe," he explained.

"Sometimes this can happen at a school when people trust a certain teacher - they feel happy to let their child go to school because they know their child will be held until they return at the end of the day.

"For me, Murdoch gave me that feeling of being held, it gave me safety and the confidence to go outside of my comfort zone and learn.” 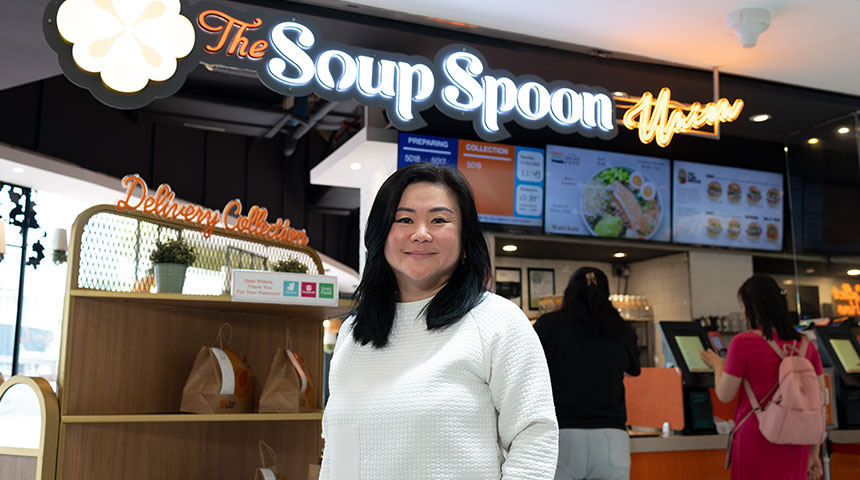 The second recipient of the evening was Singapore-based chef and entrepreneur, Anna Lim, who, in partnership with two fellow Murdoch University alumni (one of whom became her husband), created The Soup Spoon in 2001.

Opening its first store in Singapore in 2002, The Soup Spoon has since expanded to more than 30 stores in three countries.

The business has also grown through the creation of Souperfoods, which offers ready to eat meals, and satellite food and beverage outlets the company has created such as The Grill Knife, The Handburger and The Salad Fork.

Delivering her acceptance speech direct from Singapore, Anna described the confidence, resources and personal growth she gained from studying in Perth, saying that her degree in biotechnology had set her up for success, regardless of career path.

Heidi Mippy, a proud Noongar Yamatji woman, has worked tirelessly in community development for over two decades and is a leading advocate for Indigenous youth.

An author, business consultant, and coach, Heidi has developed many pioneering initiatives to enhance the lives of Aboriginal people.

The third Murdoch alumnus to be honoured last night, one of Heidi’s major achievements was establishing a unique academy at Fremantle College that has had outstanding results and benefits for Indigenous students studying there.

Curriculum based, but grounded in culture, the Djidi Djidi Girls Academy introduces students to cultural activities such as trips on country and two-way science. The Academy has seen outstanding improvements to student engagement, academic performance and mental health.

Heidi has had a broad career across the public sector including working at the WA Police Force, Department of Child Protection, and the City of Melville.

She outlined the drivers that made her such an effective agent of change and highlighted the lack of opportunities afforded to her grandparents as a major motivator in her quest for equity and equality for the people for which she advocates.

"We are fighters, we are survivors, we are capable, we are human, and we are worthy," she said.

"This award isn't about luck, it's a culmination of collective preparedness and opportunities . . .  [it] comes from the willingness of great leaders to invest in the younger generation."

Heidi said she chose to study at Murdoch on the advice of one such leader: "to complement my practical experience, to be competitive in recruitment processes and to ensure that there were Noongar people in leadership roles to affect change."

Horizon Power CEO Stephanie Unwin was the final alumnus honoured at the event. A highly respected figure in the energy industry, Stephanie is pioneering many renewable energy projects and striving to find innovative ways to support greener communities and reduce greenhouse gas emissions.

With significant Government targets set for renewable energy by 2030, Stephanie is transforming the way Horizon delivers power to regional WA customers across a service area of approximately 2.3 million square kilometres.

A member of Murdoch Law School's first cohort of graduates, Stephanie relishes a challenge and credits this trait to her time spent with "disruptor" students and academics as they embarked on Western Australia's second university law program.

"We were young people working to make a difference," she said.

"Something that I've always remembered from Murdoch is that we used to use the phrase carpe diem, which means to seize the day.

"And all I see from me and the graduates from Murdoch, in law and all the other disciplines, is that seizing of the day, and I think that's a pretty cool legacy for Murdoch to have left us all."

The four winners honoured last night join an elite group of 34 previous recipients, who have made their mark on national and international stages since departing the grounds of their alma mater.

Murdoch alumni are a vital part of ensuring our university continues to evolve and bring depth to the student experience. There are also many professional and personal rewards to be gained from continuing your relationship with your university. Discover more about being part of the Murdoch Alumni family.