A team of engineering students has presented ideas to review and improve the water recycling network in Newman.

The arid Pilbara region of Western Australia’s north is known for its dusty red soils, but a flood of ideas from Murdoch students could help keep its parks and gardens lush and green.

Three students from Murdoch University’s engineering program recently won a design competition held by the Shire of East Pilbara to come up with ideas to improve the water recycling network in the mining town of Newman.

The competition asked students to develop strategies to meet the objective of 100% recycling of treated effluent from the Shire’s sewage treatment plant.

The project began in Semester 1, when masters students from the Water Treatment and Desalination program and undergraduates from the Environmental Engineering and Environmental Science programs worked in groups to come up with concepts.

Program Chair, Dr Martin Anda, worked alongside colleagues to assess the students’ work and three groups were selected to present their design ideas to Shire staff in Newman via Zoom.

Shire staff named Vernon Phiri, Rinesh Chovhan and Hannah Hughes, the winners, and Mr Phiri and Mr Chovhan flew to Newman to present their project at a council meeting.

“This would result in the current 50% outflow from the plant to the BHP-owned site being ceased within four years as required by BHP,” he said.

The Shire’s Executive Manager of Infrastructure, Raees Rasool, said Councillors were excited by the students’ idea.

“The water balance model can now be retained by Shire staff to usefully explore other water strategies in Newman,” he said.

Murdoch graduate and the Shire’s Acting Manager of Waste, Tom Wheeler, said following the students’ presentation the Executive had asked him to consider arrangements for the retrofit of Shire houses with greywater reuse systems as a monitoring and demonstration trial.

Many households in Newman are reluctant to invest time, effort or cost into converting their large barren yards into cool gardens because of the high cost of water required for irrigation all year round."

“This is a shame because greening efforts with shade and fruit trees would result in reduction of the urban heat island effect and create a much cooler and pleasant town to live in for all residents,” he said.

Waste Sustainability Officer, Saphron Stapleton, said there are potentially more opportunities for Murdoch students to explore as part their studies.

“I am investigating increasing re-purposing and recycling of various waste streams disposed at Newman’s landfill and it would be great to have input from the students,” she said.

Dr Anda also envisions possibilities for a Carbon Neutral Newman and is already in discussions with BHP and other industry partners to develop waste-to-energy and solar hydrogen trials.

After the presentation, the students drove further north into Karijini National Park for a two night stay at the Indigenous-owned Karijini Eco-Retreat, as part of the prize for winning the competition. Students were able to hike through Karijini’s gorges and explore the beautiful Pilbara landscape. 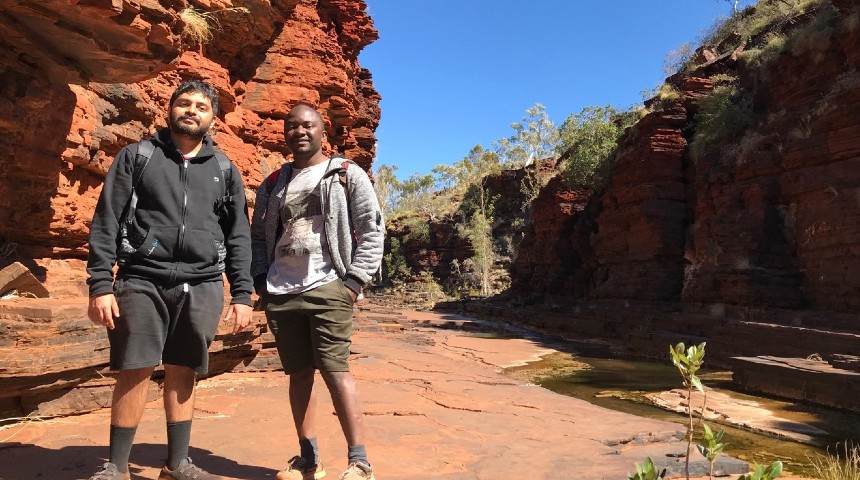 This opportunity was made possible as a result of several high-calibre Murdoch students being successfully recruited by the Shire to take up graduate positions in its engineering department, including Tom Wheeler, Saphron Stapleton and Daniel Hay-Hendry, the Shire’s most recent recruit who is working on civil infrastructure projects including a reverse osmosis plant at Cape Keruadren.

And what do all these brilliant young Murdoch graduates do with their spare time on weekends in remote, faraway Newman? Well, there’s no time for slouching about watching TV.

As soon as the most recent Murdoch graduate, Daniel Hay-Hendry, arrived he was picked up at the airport by Tom and Saphron and whisked off to the tip, where they went to collect large discarded timber boxes to convert into raised vegetable beds in their home gardens. And then they headed out of town into the wonderful Pilbara landscape to hike up Sandy Creek and end the day with a sunset swim in one of its many cool, refreshing tree-lined billabongs.

Just some of the diverse and exciting opportunities that lie ahead for Murdoch University graduates.
Posted on:

Quiz: Which engineering course suits you?

Why study engineering at Murdoch