How smarter farming is growing the flocks of the future

Researchers at the Food Futures Institute have identified how strategic feeding, smaller mob sizes at lambing and new farming practices can transform our national sheep flock.

Australia produces some of the finest lamb and wool in the world, grounded in the experience farmers have gained since the first fine-wool Spanish Merinos arrived here in 1797.

The growth and success of the industry today largely depends on farmers’ ability to breed ewes and improve lamb survival. This will feed the economic opportunity on our doorstep.

As more than 1 billion Asians join the global middle class by 2030, the demand for sheep products is expected to rise as they opt for higher-quality foods and textiles.

Meat & Livestock Australia highlights the fact sheep do not have any religious taboos or history of diseases means there is scope for major growth in Asian markets as this shift takes place.

To meet that growing demand, breeding, feeding and management must continue to improve.

Lamb survival can vary significantly between flocks, although it is commonly acknowledged that 20% to 30% of lambs born will not survive to marking (the process of earmarking, castration and tail-docking that generally happens at between two and 12 weeks).

That rate is the subject of a concerted industry effort to raise survival rates to 90%. Murdoch researchers are at the forefront of this work, developing guidelines that are already moving lamb numbers in the right direction.

Building on well-established principles like time of lambing to coincide with increased pasture growth  and providing appropriate shelter to lambing ewes, Associate Professor Andrew Thompson and his team are fine tuning these and other aspects of breeding and ewe management.

From technology that allows farmers to improve management and identify good breeding stock, to refining ewe condition score targets, Dr Thompson’s team is at the leading edge of the industry.

One of their major successes has been to understand and optimize the nutritional requirements and condition of lambing ewes ahead of lambing.

This research has involved various projects mostly on commercial farms around Australia to determine the pasture and supplementary feeding levels required to achieve condition score targets at different times during the reproductive cycle.

“We found that maternal ewes performed better than expected and were still able to achieve condition score targets of 3 to 3.5 at lambing even when there was limited food on offer during pregnancy. Their bigger capacity to eat also means that maternal ewes gain significant weight between lambing and their following mating” said Dr Thompson.

“This builds on work we’ve done to establish the optimum condition of Merino ewes around lambing time, which has already been adopted into programs like Lifetime Ewe Management and Bred Well Fed Well.

These programs have resulted in widespread improvements for productivity, profitability and welfare across the sheep industry – achievements that we’re incredibly proud of.”
Associate Professor Andrew Thompson

The Lifetime Ewe Management program is a training course involving hands-on sessions that equip farmers with best practice management principles. The delivery of the course to sheep producers has been funded by Australian Wool Innovation since 2008.

LTEM has generated an estimated $300 million in savings for the sheep industry over the last decade, in addition to delivering significant animal and farmer welfare benefits.

On average, producers that have participated in the two programs have increased the number of lambs weaned per ewes by more than 7% - representing an extra 1 million lambs per year.

Another research project looked at the benefit of lambing ewes in smaller mobs and investing in paddock subdivision to improve lamb survival and farm profitability.

The national lambing density project, which was funded by Australian Wool Innovation and Meat & Livestock Australia, involved two experiments completed on 85 farms across southern Australia to investigate the impacts of mob size and stocking rate on the survival of twin-born lambs of Merino and non-Merino breeds.

The project also collected data from about 200 sheep breeders across southern Australia which showed that reducing mob size at lambing by 100 ewes increased survival rates of single-born and twin-born lambs by 0.3% and 1.1%.

“Across the project we found that, on average, reducing mob size at lambing by 100 ewes increased lamb survival by 0.8% single-born lambs and 2.2% for twin-born lambs, regardless of Merino or non-Merino breed,” said Dr Amy Lockwood, who worked with a team of researchers across Australia. 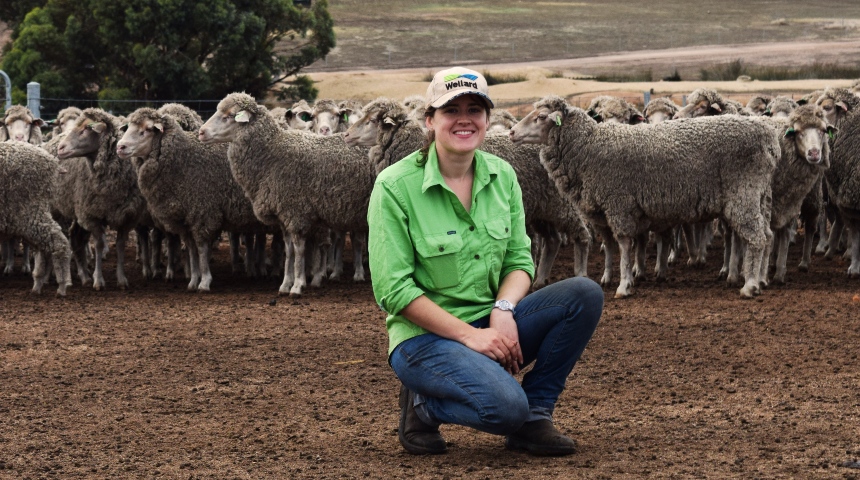 Image caption: Dr Amy Lockwood at a farm research site as part of her work with Australian Wool Innovation.

“Optimum mob size is dependent on several factors including ewe pregnancy status, the type of paddock subdivision, whether or not the benefits of improved pasture utilisation are capitalised and the target return on investment, and therefore we are unable to provide any generic recommendations for optimum mob sizes at lambing.

“Economic analysis has shown that paddock subdivision to lamb ewes in smaller mobs can be profitable and smaller mobs should be prioritised for twin-bearing ewes.”

A practical way for farmers to reduce mob size at lambing is to use temporary fencing, especially if the ewes don’t require a water supply in the lambing paddock.

To improve the productivity of a mob, you also need to select the right rams and ewes to breed.

Dr Thompson’s team is helping farmers do that by identifying the maternal pedigree of individual lambs.

As each lamb inherits half its genes from its mother, those ewes delivering more profitable offspring can be prioritised for future breeding, as can their offspring.

A recent research project used Bluetooth proximity sensors to successfully establish maternal pedigree on commercial farms, the first large scale testing of these devices. The research matched more than 15,000 ewes and lambs from 40 flocks on 21 farms across a range of ages, paddock and mob sizes. 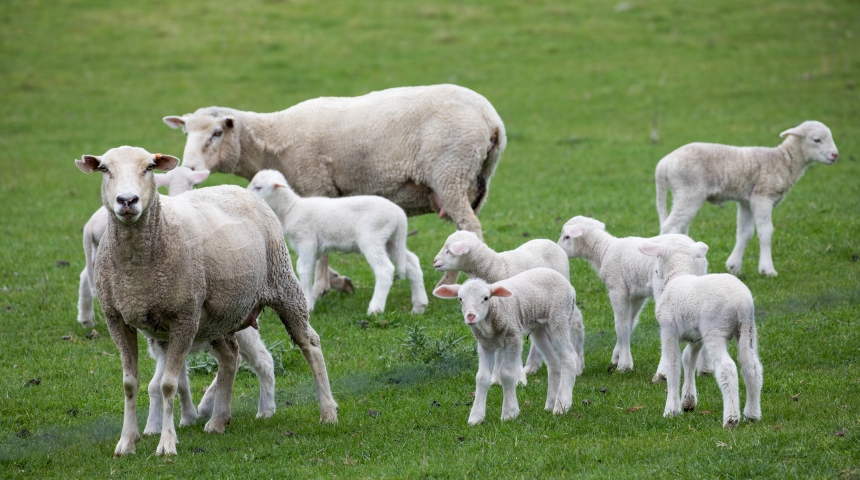 Image caption: Spring in Australia - lambs in the paddock with their mothers.
Ewes wore beacons mounted on collars around their neck and lambs wore receivers, so that lambs logged which ewes spent most time in close proximity.

These sensors were 95% accurate in matching lambs to ewes within 24 hours.

“As those lambs are grown for wool or meat, that information may be used to refine traits among their progeny,” explained Dr Thompson.

Where a farmer is looking to breed for fast growth or carcass and eating quality, or perhaps wool volume or reproductive rates, knowing the pedigree of the sheep is really valuable data.

“If we can understand where a lamb is inheriting its genetics from on the maternal side, in addition to the knowing the profile of the stud, we can get much smarter about breeding more productive and profitable lambs.”


Flocking to the research

The team that Dr Thompson and Dr Lockwood are part of is a national leader in sheep research, contributing to programs that have trained more than 10,000 sheep producers managing more than 50% of the national ewe flock over the past decade.

It’s a tremendous feat to have impacted such a large and widely dispersed industry and one that Dr Thompson credits to the collaborative nature of the participants.

“Almost all of our research is funded by industry and conducted on farms with the very people who action and benefit from the research, which means they are engaged right along the journey,” said Dr Thompson.

“So, everything we do has a clear and direct route to market, which is critical in doing research that improves the industry.”

Learn more about our research.
3