Professor Lyn Beazley AO is a distinguished neuroscientist with a research focus on preventing and repairing neurotrauma.

From 2006 to 2013, she was the Chief Scientist of Western Australia — the first woman to hold such a role anywhere in Australia.

As Chief Scientist, she advised the Government on science, innovation and technology and was an Ambassador for Science nationally and internationally.

Murdoch University Vice Chancellor Eeva Leinonen commended Professor Beazley on her contribution to the promotion and direction of science in Australia.

Lyn is a wonderful and enthusiastic advocate for study and careers in science, technology, engineering and mathematics – especially for women and young people.

Harnessing her passion for science, Professor Beazley serves on national boards and councils, as well as several state-based organisations. She is an Officer of the Order of Australia, Fellow of both the Australian Academy of Science and the Australian Academy of Technological Sciences and Engineering, a Fellow of the College of Educators and a Companion of the Institute of Engineers.

Her other achievements include the establishment of the citizen science project Dolphin Watch, in collaboration with Murdoch University scientists.

In her address on Sunday, Professor Beazley told graduates they are uniquely placed to make a real and meaningful difference in their communities.

Your training empowers you to touch many aspects of life. A good future for our planet must be underpinned by sound knowledge, but knowledge that is applied with wisdom.

Her advice to graduates was simple – be flexible, be alert to opportunities and listen to your gut. She also told graduates to back themselves.

“If you can do most aspects of a job description, don’t hold back; you can learn the rest, remember your main skill is the ability to learn, reason and problem solve.” 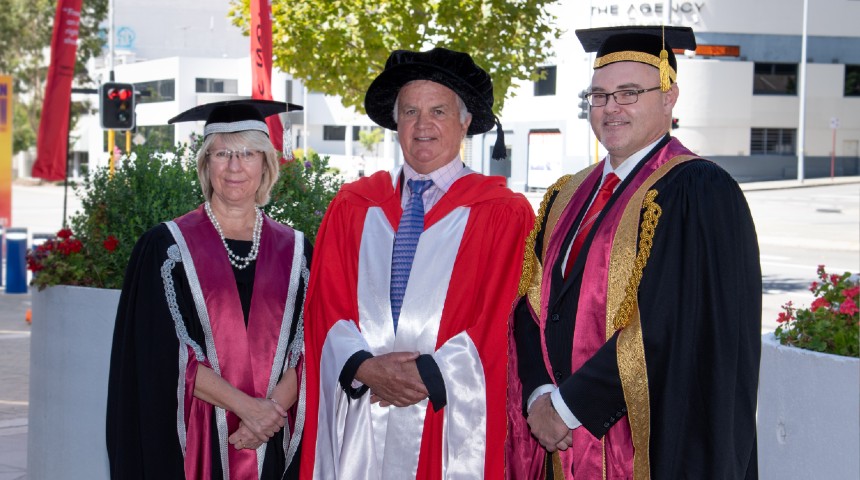 An internationally recognised conservationist, Johann van der Merwe is well respected for his work in successfully integrating business and biodiversity.

Over an impressive career spanning four decades and five continents, Mr van der Merwe has made significant contributions to conservation management of protected areas, most notably in Southern Africa and more recently, in Western Australia.

Professor Leinonen said Mr van der Merwe is well-known to the University, having helped establish one of Murdoch’s most successful research institutes.

As Director of South African National Parks, he oversaw one of the world’s largest protected areas and largest species management programs. In the process, he facilitated skills-based training as part of a broader rural empowerment and poverty alleviation project.

In this key role, Mr van der Merwe was also required to manage many of the world’s most virulent diseases, including foot-and-mouth disease, feline aids, bovine tuberculosis and anthrax.

In Australia, he has managed the world’s largest private biosecurity venture.

Barrow Island, a Class A Nature Reserve since 1908, is a place of unparalleled conservation significance and is often described as Australia’s 'Noah’s Ark’, being home to unique and rare species. It is also home to Chevron’s giant Gorgon project.

In partnership with Murdoch University, Mr van der Merwe and his team developed the Barrow Island Marine and Terrestrial Quarantine Management System that has set a new standard in environmental management – a tribute to the teams involved and Chevron’s resolve to protect the island’s conservation values.

Quiz: Which creative arts and communication major are you?

Make the most of your arts degree with a double major

Age no barrier for this Murdoch graduate