An engineer still in his 20s has designed and built an autonomous hybrid vehicle, proving the fleets of the future might be developed on our doorstep.

Government House had never hosted anything like this: a 1½ tonne metallic machine running rings around the rose beds and skillfully dodging the duck pond.

As a former Australian Minister for Defence, then WA Governor Kim Beazley was used to demonstrations of complex hardware. But this was an example of homegrown technical innovation developed by an engineer still in his 20s. 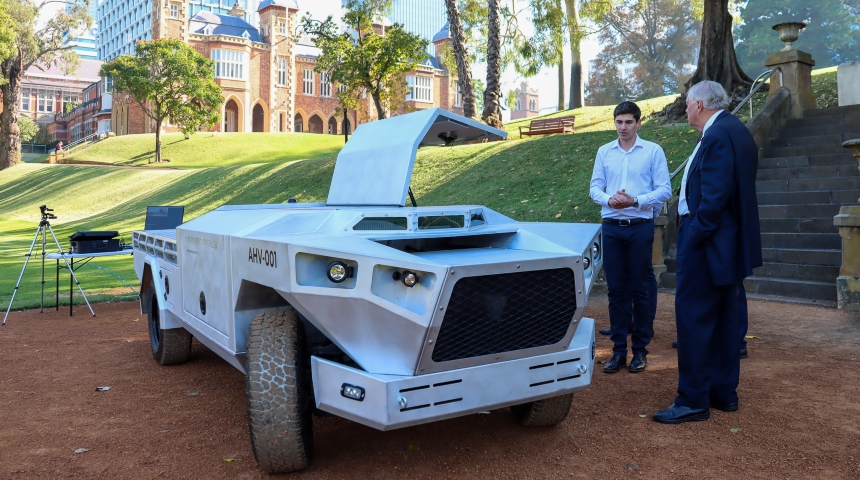 The brains behind the Autonomous Hybrid Vehicle – known as AHV-001 – is Luke Beumont Barrett, a Murdoch alumnus (B Eng. Hons) who combines the practical side of his chosen profession with a strong inventive streak.

“We were a little stressed out about the logistics of operating the vehicle in an environment like Government House, but it all went well,” Luke said.

The AHV-001 electric/hydrogen hybrid took 2 ½ years to design and build, and while it potentially has multiple applications in defence, emergency services, mining, farming and even space exploration, the project was more about demonstrating the creativity and capabilities of Luke’s young East Fremantle company – Lycaon Solutions.

“There was no commercial opportunity for it at the time, it was just ‘let’s build something great’,” Luke said. “Having said that, all the mines are automating, all the haul trucks are being automated and we will see that translate to light vehicle fleets as well.”

Luke graduated from Murdoch in mid-2018 knowing he wanted maximum flexibility in his career to stretch his creative instincts. That meant going out on his own and within months of graduating, he set up Lycaon.

“The company has three main areas of focus: renewable energy and electrical engineering; automation, and then research and development, where we do a deep dive into the technology and build something from scratch,” he said. 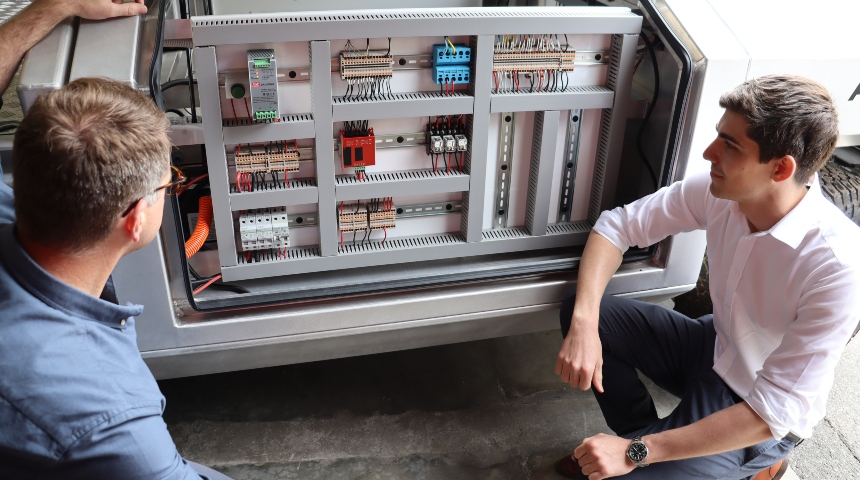 Earlier this year, Luke saw the need to bring more firepower into the business to ensure it could grow and diversify and Josh Watkins – a California native and fellow Murdoch alumnus - was his first port of call.

Luke and Josh had met in their first year of study and found the approach of academic staff in the Engineering & Energy discipline fired up their creativity and pushed them out of their comfort zones.

“There is also a big focus at Murdoch on ensuring you are industry ready,” Luke said.

“By the time you graduate, you are able to have conversations with people in industry almost seamlessly. It’s a unique skillset that sets Murdoch engineering graduates aside from the rest.”

With the business continuing to grow, the sky really is the limit for Lycaon. Along with growth comes the opportunity for Luke and Josh to further flex their innate creativity – so ably demonstrated by the AHV-001. Proving that Luke and Josh may not be in the driver’s seat, but they are in complete control.