‘Getting Our Act Together’ to fight climate change and the pandemic

‘Getting Our Act Together: A Theory of Collective Moral Obligations’ by Dr Anne Schwenkenbecher has achieved international recognition after being awarded ‘Best Social Philosophy Book’ by the North American Society for Social Philosophy.

The achievement places the Senior Lecturer in Philosophy at Murdoch University alongside some of the world’s major philosophical scholars, with  previous winners including Nobel Laureate Amartya Sen and Berggruen Laureate Martha Nussbaum.

Dr Schwenkenbecher’s book encourages readers to think differently about so-called collective action problems: instances where we cannot solve a problem or achieve an action on our own and therefore must rely on others.

With crises of war, poverty, climate change and the global pandemic, there has never been a better time to have this particular discussion.

Dr Schwenkenbecher questions at what point we are to think of ourselves not so much as individuals, and ultimately powerless agents, but as part of powerful larger groups and collectives that can together effect significant change in the world. This led to the original theory developed in her book, of collective moral obligations.

“I have always been intrigued by the conundrum of collective action: together we can achieve so much while individually – in isolation – we often barely have any impact at all,” Dr Schwenkenbecher said.

“The inefficacy of the individual may feel dispiriting and give people reason to not do anything at all —ironinically, this also undermines any possibility of creating change together. 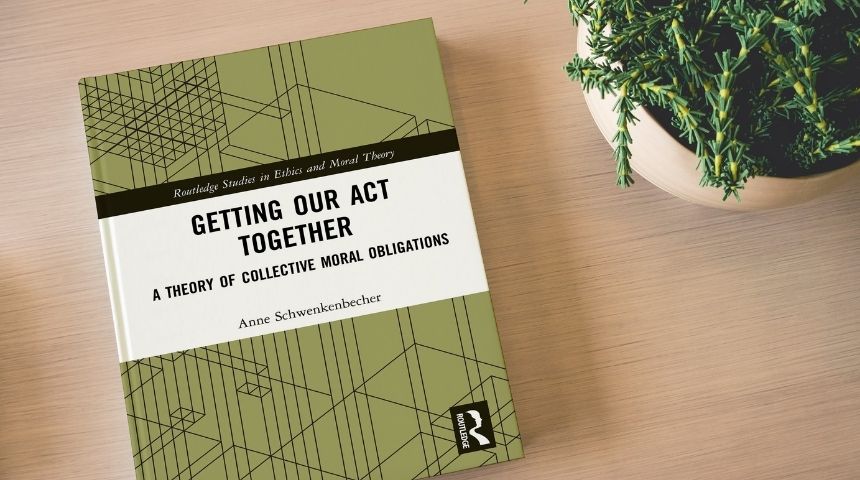 “In the book I try to re-focus our attention towards perceiving our agency not exclusively as that of discreet, isolated individual agents, but as members of social groups that will have obligations and responsibilities towards addressing real-world problems together.

“I am validating the social dimension of our actions - and omissions - and the power we have when acting collectively in groups. I argue that we should be ‘getting our act together’ on the pressing ethical issues of this day and age.”

In the course of writing the book, Dr Schwenkenbecher  found there are two fundamentally distinct ways of conceiving ourselves as agents for change.

“In the so-called ‘we-mode’ we reason from the top down, so to speak; we ask ourselves  ‘what is the best collective pattern of action in these circumstances and how can I – how should I – contribute to it?’,” she explained.

“In the so-called ‘I-mode’, in contrast, we think more about how we can – individually – effect change.

“Both are perfectly valid ways of understanding our agency in the world - as social beings we use both modes of reasoning – ‘collectivist’ and ‘individualist’, if you like.”

However, Dr Schwenkenbecher said these days people appear to be less aware of the social importance and validity of we-mode reasoning – of reasoning from the point of view of the group, where the group is the agent that can effect change for the better, rather than the individual. Her book is trying to change that.

COVID-19 and its global effect on communities is a prime example of collective moral obligations. In her book, Dr Schwenkenbecher discusses how creating a strong sense of community and emphasising collective efficacy in getting through the pandemic has been key to success.

Another example is  the collective effort to combat climate change – again a case where limited individual impact should not preclude people from taking action – neither on a personal nor national level.

“Whether it is combating the pandemic or acting on climate change – we might each think that our individual choices do not matter,” Dr Schwenkenbecher said.

But in combination with lots of other people’s choices they make a real difference.

“Unsurprisingly, the ‘each-to-their-own-approach’ is failing abysmally while those leaders and officials who appeal to the collective nature of the task at hand and encourage people to think of health as a public rather than a private good (which is, of course, nothing else but using the ‘we-mode’ in practice) show impressive results in beating the pandemic.”

She explained that large-scale collective action and global change are ultimately unsuccessful without, and in fact partly consisting in, action at local, communal and interpersonal levels.

Climate action and public health are just two examples where we need coherent government action as well as people actually making everyday sacrifices, changing their behaviour, looking out for others, beyond what is legally required of them."Dr Anne Schwenkenbecher

“I am deeply honoured to have received the NASSP Award for the Best Social Philosophy Book in 2021 and I really look forward to travelling to the US to receive my award and partake in a symposium on my book at the society’s annual conference - seeing the list of previous recipients of the award leaves me very humbled.”

“This award recognises Dr Schwenkenbecher’s significant contribution to social philosophy, exploring the ways in which we engage in collective action to achieve social change and address the significant problems we face globally. As a University, we are very proud of Dr Schwenkenbecher’s achievement and the recognition brought to her work as a result of this prestigious award. Congratulations Anne," Professor Readman said.

Climate change and political conflict: How to make an impact