Murdoch scientists have developed a comprehensive view of the regulatory environment for gene-edited products across the Asia-Pacific region, highlighting the need for consistency to help feed growing populations.

“Since the early 1900s, essentially the same principles have been applied to improve crops – more recently making use of increasingly available genomic information to identify genes with beneficial crop properties.

“But now, amongst crop researchers, there is a genuine air of excitement about potential applications of the latest Nobel Prize winning breeding technology known as ‘gene-editing’.”

Gene-editing technology is of great interest both in Australia and in the developing world, where food and nutritional security in a changing climate is a real challenge.

“Gene-editing can be used to develop desirable traits in important staple foods – in Australia this means the cereals wheat and barley, which are grown under challenging environmental conditions, and most of these grains are exported to neighbouring countries in the Asia-Pacific region.”

“However, despite the tremendous gains these techniques can deliver to growers and consumers, gene-editing regulations haven’t kept pace, and this has held back investment by the Australian grains industry,” said Professor Jones.

The absence of consistent international policies on gene-edited produce acts as a non-tariff trade barrier that can impede the development and trade of produce to meet food demands in the region. 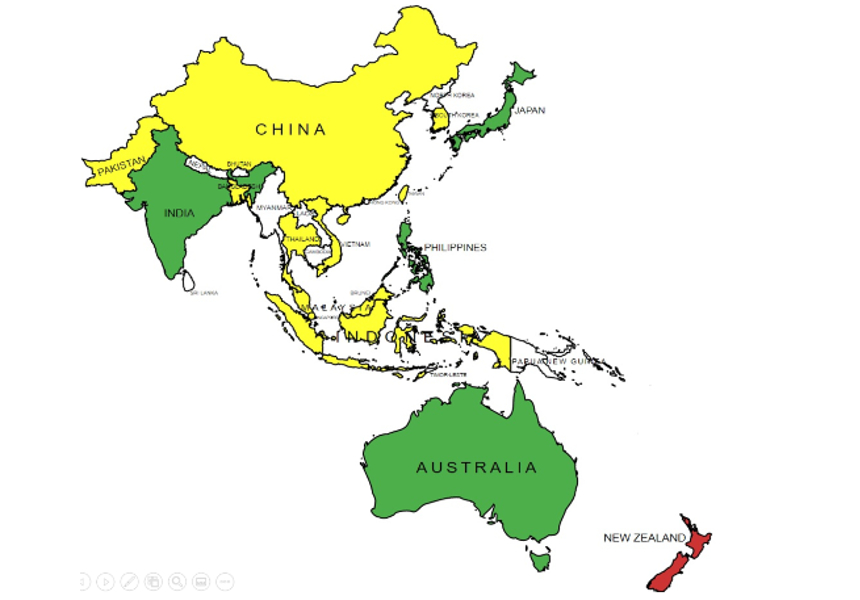 This latest research provides an overview of the science that underlies gene-editing, the current regulatory status of gene-edited produce in our trading partner countries in the Asia-Pacific, and maps the path-to-market for each country.

“The regulatory landscape is changing rapidly – in some countries like Japan, the regulations are clear, in others they are developing, and some countries appropriate policies have yet to be developed.”

In the countries coloured green on the map, most gene-edited plant produce can be grown and traded as conventional crops, with ongoing discussions in countries coloured yellow, and where it is regulated as genetically modified produce in red.

“Although the simplest form of gene-editing is de-regulated in Australia, the effect of current regulations is to limit the gene pool accessible to plant breeders, which means Australian regulations now lag behind some other countries like Japan, India and the Philippines.

The harmonisation or alignment of national policies on gene-editing is vital to enable the future trade of gene-edited produce in our region.”
Professor Michael Jones

The research, published in the journal Plants, was funded by a grant from the Commonwealth Government Department of Agriculture, Forestry and Fisheries (DAFF, formerly DAWE) from the Project Assisting Small Exporters on ‘Building Capacity for Small Exporters to Exploit new breeding technologies’, Grant number 4-FA4N7WL.

Professor Jones leads the Crop Biotechnology Research Group at the Food Futures Institute, which works to provide solutions for better use of limited land and water resources and to improve food production.

This project contributes to United Nations Sustainable Development Goals 1 and 2, to eliminate poverty and hunger around the world.

Learn more about our research.
5