It makes sense that an economy built on the sheep’s back should remain at the forefront of farming. This time around it's carbon.

“In Western Australia there’s a lot of these sandy and semi-saline soils, and that’s where the opportunity lies. It also means that carbon projects are not competing with agricultural production.”

Scientists at Murdoch University have been exploring how to capture and store carbon across our landscape as the world is urged to take urgent action to combat climate change and its impacts.

As the United Nations warns that weather patterns are changing, sea levels are rising and weather events are becoming more extreme, the science of storing carbon is critical to understand.

“There are basically three ways to manage carbon on farms. The first is to reduce your emissions, the second is to replace fossil fuels in power production and materials you use, and the other is carbon sinks,” explains Professor Harper.

When plants grow they take carbon dioxide out of the air and this goes into the biomass above and below the ground. To increase the amount of carbon stored, you need to grow the right plants and build up the soil.

On a sandy site near Moora, 180 km north of Perth in the Wheatbelt region of Western Australia, Professor Harper has demonstrated this to great effect, as well as the opportunity of farming carbon in soil not doing well for growing or grazing.


Nothing was growing under agriculture up there, but we got three tonnes of carbon dioxide each year into the soil under a tagasaste planting, and another six tonnes per year in the biomass of the trees."
Professor Richard Harper

“That was pretty spectacular and points out what is possible with a productive carbon sequestering system.”

While this was achieved with tagasaste – a small evergreen tree popular for grazing animals – it is also an example of how poor soil can be made productive again as carbon sinks. The plants are the vehicle to get it there.

“Carbon storage on a site is driven by plant growth, so everything that affects plant growth will affect the amount of carbon you can store on a site,” says Professor Harper. 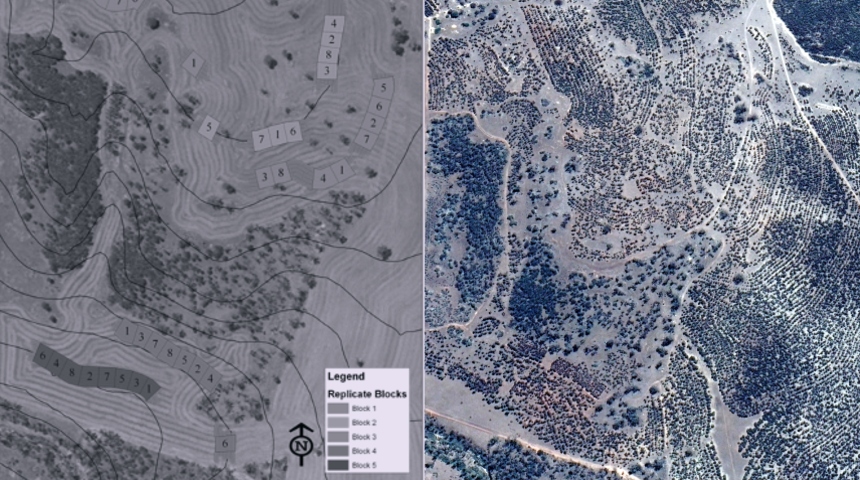 Image caption: Aerial view of the Peniup carbon farming experiment in 2009 and 2019. The surrounding landscape was planted as part of Greening Australia’s ecological restoration of the whole farm.

“At the centre of that – and all life – is water and we know the amount of carbon storage in soil and vegetation is directly related to rainfall.”

The other key element from a soil perspective is storage capacity. You can generally get a greater volume of carbon in loamy or clayey soils than sandy soils, because of differences in plant growth and the protection they offer to the organic matter they hold.

The benefits of carbon farming extend beyond combating climate change, with changes in land use presenting a whole range of upsides.

“Around the world we’re seeing plant and animal species disappearing. At the same time, there is an urgent need to mitigate global climate change,” said Dr Standish.

“Carbon farming offers the opportunity to address both these challenges.”

Dr Standish is discovering how to design and manage carbon projects to maximise carbon credits and co-benefits. This research is informing the development of the emerging carbon market in Western Australia and contributing to conservation of our unique biological diversity. 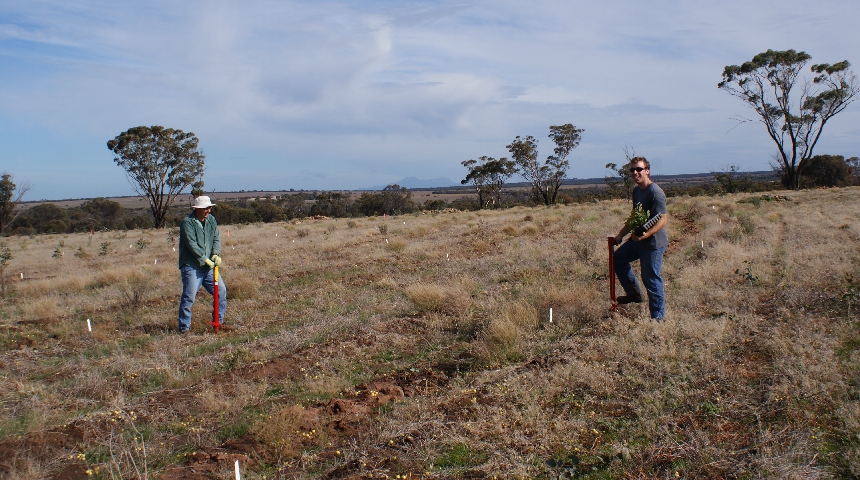 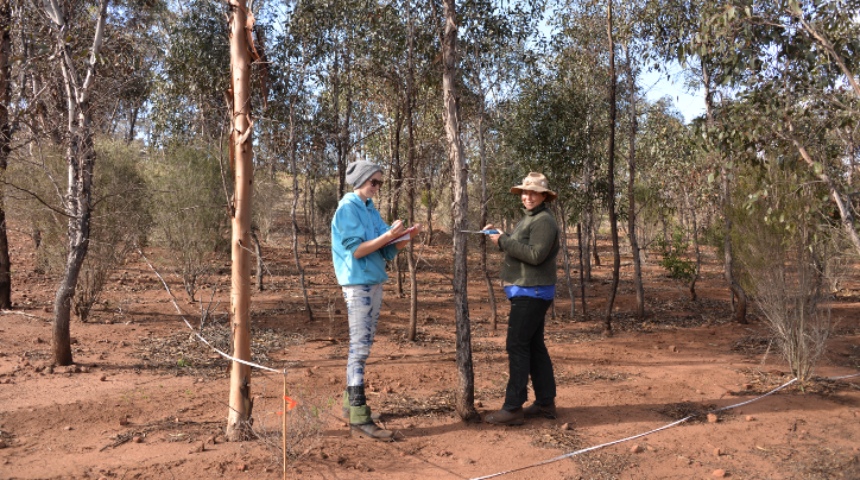 Image caption: Monitoring the same experiment ten years later by measuring the girth of the tree to estimate woody biomass (i.e. tree carbon). Notice absence of agricultural weeds and how much the trees have grown. Photo credit: Suzanne Prober

The common assumption from the carbon industry is that it’s better to plant monocultures – single species of eucalypts for example – because that’s an easy way to store lots of carbon. Dr Standish is challenging that assumption because it ignores the co-benefits of diverse plantations.

“If you put lots of different tree species in, you create structure, more habitat for wildlife and the associated co-benefits. And that’s increasingly what the voluntary market is targeting,” she said.

Given there’s very little data on the co-benefits of different approaches to carbon farming, the team is filling the information gap to show how biodiverse projects can deliver more than just carbon capture.


You’ve got the carbon and then what else do you get? Do you get pollinators visiting? Is there the potential for honey production? Do you get wildlife using the projects as corridors to move through the landscape? These are the questions we’re answering.”
Associate Professor Rachel Standish

“We can also use these carbon projects to link up bushland remnants so species can spread and establish themselves easier.”

The early signs of wildlife are positive, with Dr Standish recording a malleefowl – a bird that’s very fussy about where it lives – in one of the projects she’s established in the southwest.

“To see this bird interested in a habitat that’s been constructed is amazing.”

The challenge now is tying the science to the economics.

“We’re in a mining State – when people mine gold, it comes down to the yield, the cost of extraction and the price of gold,” said Professor Harper.

“If you’re dealing with carbon as a commodity, it needs to be looked at in the same way. What’s the yield? And what does is cost to produce? What are the drawbacks?”

The science underpins that discussion.

Professor Harper ran a study in Wickepin where two plots were planted; one with 500 trees per hectare and another with 2000. After 17 years, they recorded the same carbon yield for each plot, but the more densely planted area cost four times as much.

That type of shift in basic management will make carbon sinks much more efficient. As research like this continues to inform best practice in the field, the next step is developing an efficient market for credits and co-benefits such as biodiversity or improvements in water quality.

Professor Harper says that if companies or agriculture make carbon reduction pledges, or want to generate carbon credits for sale, the offsets will have to be measured and reported. However, right now, that framework for a properly functioning carbon market isn’t fully established.

“So far, in most of the local discussion there’s been a lack of data – carbon offsets are a new type of financial product.


Until we have that and a price on carbon that motivates landholders to switch land use to carbon farming or develop unproductive land, we won’t see the wide-scale uptake we need to make a big dent.”
Professor Richard Harper

In the meantime, the team at Murdoch will continue to deliver the science that policymakers and landowners need to make informed decisions and act on best practice principles when putting carbon farming into practice.

“A higher carbon price will be a game changer as large companies will have to invest more into carbon projects and those projects will become more attractive for landholders,” says Dr Standish.

“That’s what motivates me to get the science out there – we can leverage this opportunity to restore native ecosystems and derive a whole range of benefits that go far beyond just capturing carbon.”

This research supports the United Nations Sustainable Development Goal 12 and 13.