Are feral cats biting off more than they can chew?

Researchers from Murdoch University have revealed that even small stray and feral cats take on large and difficult-to-handle prey. And it’s posing a risk to native wildlife populations.

Feral cats are one of the largest environmental problems facing Australia today. They have been linked to the extinction of at least 22 mammal species, with over 100 further native species listed as threatened by them.

Wildlife biologist and Director of the Centre for Climate-Impacted Terrestrial Ecosystems at Murdoch’s Harry Butler Institute, Professor Trish Fleming is leading research into the threat they pose.

In order to reduce the harmful impact of feral cats, we need to better understand their ecology, including why they hunt what they hunt,” said Professor Fleming.

Professor Fleming is working with Dr Heather Crawford and Professor Mike Calver to better understand the impact of feral and stray cats on the endangerment of Australian wildlife populations.

“We collected a sample of 568 feral and stray cats that had been euthanised because they posed a risk to native wildlife or were controlled as nuisance animals, and identified what they had last eaten.”

The research team discovered that even young and small cats had been active hunters, with many taking large prey species, and some of the youngest tackling and consuming potentially ‘dangerous’ prey that would likely have put up a fight. 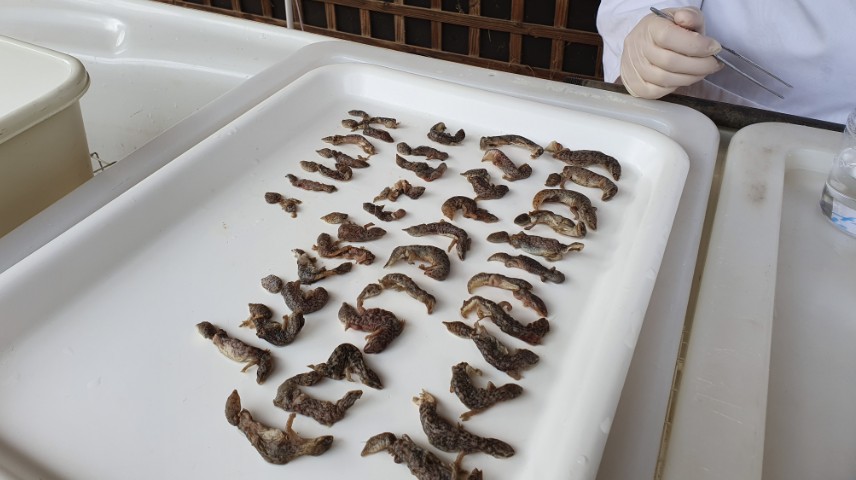 Image caption: Over 40 geckos were found in the stomach of one feral cat during the study. Photo credit: Andre DeSouza

“Native mammals were also present in the cat diets, including juvenile rock wallabies, quendas and possums. Birds were also common with at least seven parrot species identified, many of which are large ground-foraging species, such as the Australian ringneck parrot.”


The team tested cats’ body size, skull shape and bite force – the force that can be applied at their canine and carnassial teeth – to predict their prey handling ability.

“We found that large male cats represent the greatest risk in that they have greater body mass and bite force that would allow them to handle a greater range of prey. But the strongest predictor of prey size was the age of the cat, with older cats taking the largest prey,” said Professor Fleming.

Professor Fleming hopes the research will help to inform Australia’s response to the impacts of feral cats on biodiversity and native wildlife.

“Understanding what influences the diet of feral cats is just one of the first steps to ensuring long-term survival of the hundreds of native species threatened by these introduced predators.

“While there is no doubt that other factors such as habitat clearing and other introduced pest and predator species all threaten Australia’s native fauna, it’s evident that feral cat predation has had the most rapid, dramatic and demonstrable impact on species’ survival.”


Learn more about research from the Harry Butler Institute.
Posted on:

Boosting your immune system this winter

Talking trust, Dr Google and the social media side of COVID-19