Age no barrier for this Murdoch graduate

Graduations are a special event for any student – the culmination of years of commitment, dedication and hard work.

On a quiet street in Rockingham, Murdoch University put on a graduation ceremony like no other.

Wearing full academic regalia and with a grin from ear to ear, Jennie was surrounded by her three children, five grandchildren, other family, friends and members of the Murdoch community as Chancellor Gary Smith presented her with an academic testamur in a garden graduation ceremony at her Rockingham home. 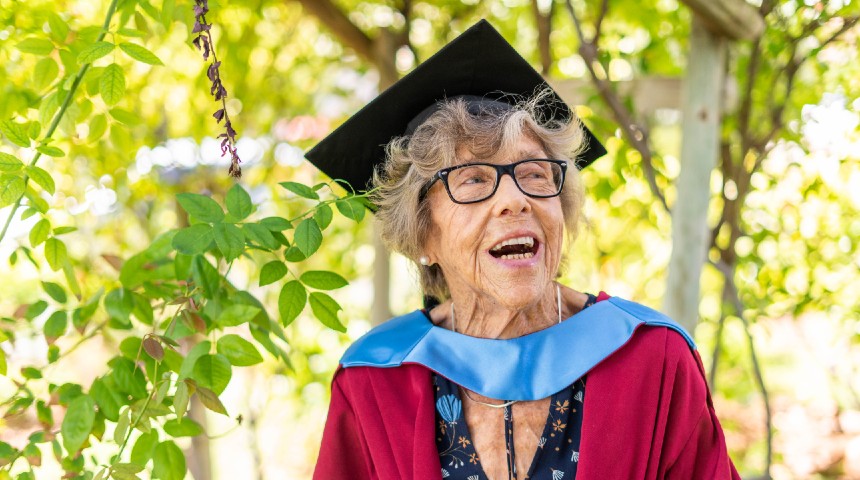 Jennie has been a stalwart of the Rockingham campus since she first set foot on campus almost a decade ago.

Her start at Murdoch wasn’t as a student. When Murdoch’s Rockingham campus opened its doors to allow members of the public to sit in on lectures, Jennie often attended. Then, she decided to make it official.

I thought, ‘We’re sitting in on lectures and doing all the reading, I may as well start the degree!’ I didn’t believe I’d ever finish it. But I did.

After nine years of studying, Jennie has graduated from Murdoch University with a Bachelor of Arts, majoring in Indigenous Studies.

Jennie said she was thrilled to celebrate her graduation in such special circumstances.

“It was incredible having the Chancellor come down. I had no idea the he would be there, it was a great surprise,” she said.

Humble as ever, Jennie said she didn’t quite expect such a fuss.

“I was amazed that everyone came along. I didn’t think anyone was that interested in what I was doing!”

Addressing guests at Jennie’s garden graduation, Chancellor Gary Smith said it was wonderful to have someone like Jennie as an alumnus of the University.

“Jennie was an active member of the Rockingham community, described by all who encounter her as generous in everything she does,” he said.

During her time at Murdoch, Jennie worked closely with the University’s former Provost and Acting Vice Chancellor Andrew Taggart to build connections between the University and the local Rockingham community.

“Jennie organised study groups and chat groups at the campus and elsewhere in Rockingham. She would regularly be found at the café with fellow students, young and old,” Emeritus Professor Taggart said.

“She was a driving force for the University of the Third Age (U3A) and contributed to Mature Adults Learning Association (MALA), all based at Rockingham.” 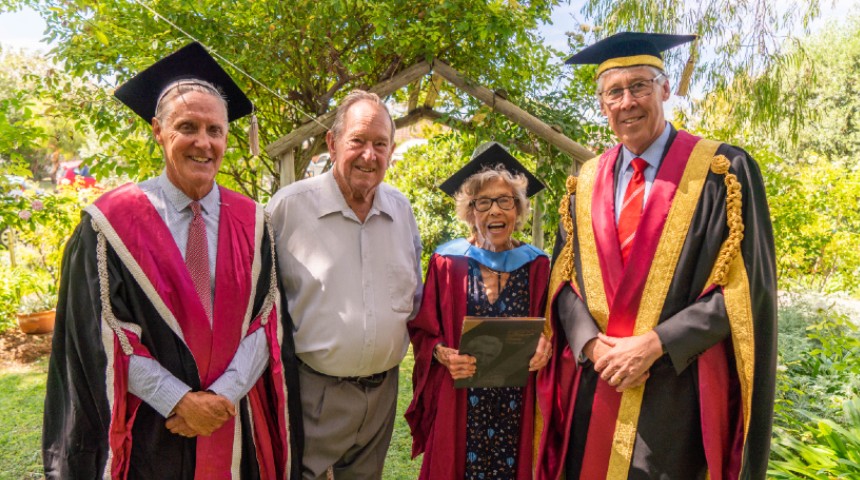 No stranger to the world of study, Jennie is the epitome of a lifelong learner and she brought a lifetime of experience to the classroom.

Jennie previously had a successful career as a nurse, working at Armadale and Fremantle Hospitals. She completed her nursing degree at Edith Cowan University and over her career, constantly upskilled by completing medical training.

“Jennie just wanted to understand the world in which she lived. She had an insatiable thirst for learning,” Emeritus Professor Taggart said.

Whether young or old, Jennie is quick to recommend study to anyone. So, what’s next for Jennie? We hear she’s mulling over completing her Masters degree.